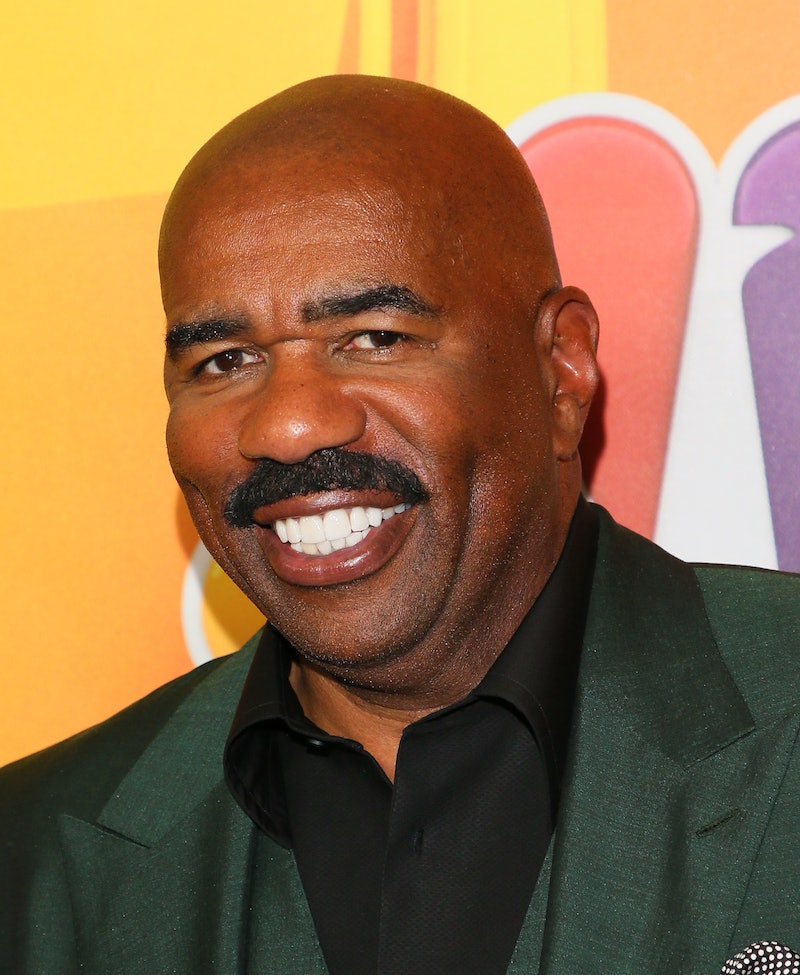 It seems everyone had an opinion after Michael B. Jordan and Lori Harvey confirmed their relationship in recent weeks. Among those people, of course, was Lori's famous stepfather; Steve Harvey warned Jordan to tread lightly, in a way only a dad could.

"I like this one," he admitted of the actor during the Friday, Jan. 22 episode of iHeartRadio's The Steve Harvey Morning Show. "I still got my eye on him. I mean I like him, but like I say to all of 'em, 'I might like you, I might approve of you, but I got a thumb-size section of my heart filled with nothing but pure hatred for your ass. Just in case I need it.'"

The Family Feud host went on to call Jordan a "nice guy," but doubled down on his cautionary advice, making it clear that his approval is 100% conditional when it comes to his daughter's suitors. "I got this little section partner, where all I gotta do is click a switch and I can hate your ass," he said before referencing the Black Panther star's reigning title of People's 2020 Sexiest Man Alive. "'Cause, you ain't the sexiest man in the world to me! Let's be clear about that."

Following several weeks of speculation, Jordan and Lori — whom Harvey adopted in 2007 after marrying her mom, Marjorie Bridges — confirmed their relationship on Jan. 10 when they went Instagram official. (They'd previously been spotted arriving at an Atlanta airport together the day before Thanksgiving — sporting almost identical sweatsuits, no less.) A source later told People that they'd spent all the major holidays together in November and December and that Lori seemed very happy.

The magazine's insider added that it seemed they'd "wanted to get to know each other in private" and had been careful about being photographed together. The two have already been dating for more than four months but have been friends for years and already met each other's families, according to Entertainment Tonight. Jordan and Lori let their guard down, however, while vacationing together in St. Barts after celebrating her 24th birthday. "He love it here," Lori captioned a vacation mirror selfie that showed Jordan holding onto her breast.

Whether or not Harvey saw the risqué post is unclear, but it seems this papa bear wouldn't shy away from telling Jordan exactly what he thought about it.

More like this
Michael B. Jordan Tackled His "Public Breakup" With Lori Harvey On 'SNL'
By Brad Witter
Selena Gomez Confirms She's Single Amid Drew Taggart Dating Rumors
By Martha Sorren, Jake Viswanath and Jack Irvin
Who Is Pete Davidson Dating? He & Chase Sui Wonders Got Caught Kissing
By Jake Viswanath
John Corbett's Wife Bo Derek Once Revealed If She's Team Aidan Or Team Big
By Alyssa Lapid
Get Even More From Bustle — Sign Up For The Newsletter
From hair trends to relationship advice, our daily newsletter has everything you need to sound like a person who’s on TikTok, even if you aren’t.