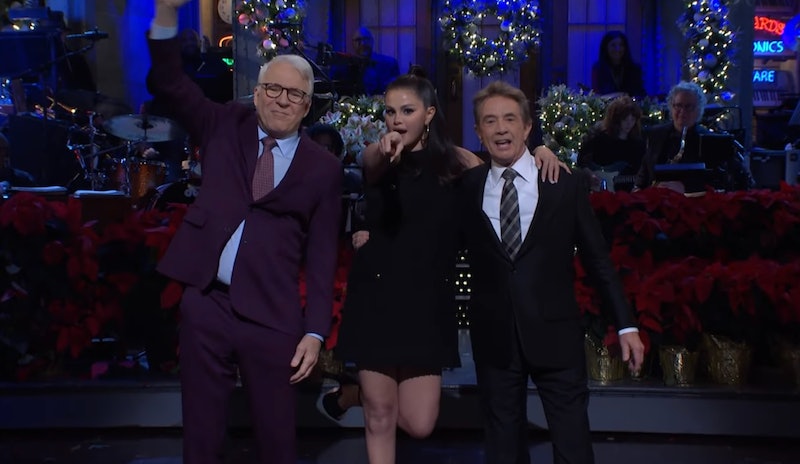 Just before Steve Martin and Martin Short finished slaying their Saturday Night Live monologue on Dec. 10, their Only Murders in the Building co-star Selena Gomez stepped in to help finish the job. As Martin was eulogizing Short — more on that later — he lamented, “Now that Marty’s gone, who will I ever work with?” That’s when Gomez made her surprise appearance, asking, “What about me?” Putting her arms around the episode’s joint hosts, Gomez delivered the obligatory closing line: “We’ve got a great show for you tonight! Brandi Carlile is here, so stick around, we’ll be right back!”

Earlier in their monologue, the SNL vets, who also reunited with Gomez while reprising their iconic roles in a Father of the Bride sequel sketch, mentioned that they are “currently working on” Hulu’s Only Murders in the Building Season 3. “Our show is like Steve at the urinal,” Short joked. “It streams for 32 minutes.”

That was hardly the first or only time they roasted each other in the opener. (You can watch Martin and Short’s full SNL monologue in the video below.) After playfully trading barbs, they just so happened to discover that they’d both written eulogies to read at each other’s funeral. So why not just read them now? First up, Martin began, “Wow, not much of a turnout,” before joking that he’d cremated his pal, who died in a Tesla, against his wishes. He also noted that Short had a “so realistic” girlfriend, kidding that “Marty was always sexually active — as long as there were batteries in the house,” and making fun of his role as Jack Frost in The Santa Clause 3.

Short, for his part, called his co-host a “bland, overrated, white-haired son of a b*tch,” noting that he knew his friend was looking down on them “because he always looked down on everybody.” After making another urinal reference, he remarked, “Seeing you in the casket reminds me of that classic SNL sketch, ‘Dick in a Box,’” to thunderous applause.

Days earlier, the duo also kept the jokes going while previewing their SNL episode during a joint Dec. 8 appearance on NBC’s The Tonight Show Starring Jimmy Fallon. “Steve and I think of ourselves as the Lennon and McCartney, of comedy,” Short joked, before telling Fallon, “No one else does, but we do.”

No, that didn’t mean Martin was planning to play his banjo, though. The reason? “I’ll tell you why — because the cast voted,” the Planes, Trains & Automobiles actor deadpanned. Naturally, Short also took that as an opportunity to dunk on his longtime friend, chiming in, “When he pulls out his banjo, people in China beg for lockdowns.”

Apparently, these two can turn anything into a laughing matter, and it’s all love.

More like this
Michael B. Jordan Tackled His "Public Breakup" With Lori Harvey On 'SNL'
By Brad Witter
The Black Lotus Staff Has "Had Enough" In The 'White Lotus' Spoof From 'SNL'
By Brad Witter
Pamela Anderson’s Dating & Marriage History Could Be Its Own TV Series
By Jake Viswanath
Wait, Is Barney Stinson Related To Sophie On 'HIMYF'?
By Gretchen Smail
Get Even More From Bustle — Sign Up For The Newsletter
From hair trends to relationship advice, our daily newsletter has everything you need to sound like a person who’s on TikTok, even if you aren’t.