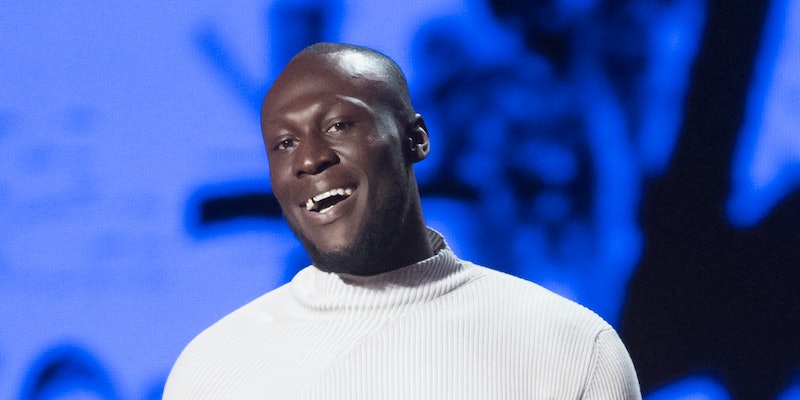 What better marker of success than being able to give back to your community? Alongside his generous donation of £10 million to Black Lives Matter causes over the next decade, Stormzy recently surprised a Croydon teen by redecorating his bedroom. The musician rolled up his sleeves with redecorating company The Good Guys to paint 15-year-old's Ishae's room as part of the company's "give back" scheme. Created by Wandsworth's Cyle and Nick, the scheme helps deserving young people in the community and transforms their spaces for free. For Ishae, he had no idea that a global superstar would be the person doing it.

Stormzy and The Good Guy's generosity was captured by the BBC. A visibly shocked Ishae was surprised by the Blinded By Your Grace singer in his hallway after they'd freshly painted his room which including a permanent signature from Stormzy. The teen and budding musician was selected for the "positive behaviour" he demonstrated since starting at his South London school.

Ishae's mum Sandra said the gesture really "meant a lot" for her son who is a "brilliant boy."

Stormzy praised The Good Guy's Cyle for "doing a good thing." For every paid job the company receives, they find a young person living in poverty or living with a mental illness and decorate their bedroom for free.

Via The BBC, the two men "had troubled upbringings and want to help make a difference."

Speaking about Cyle, Stormzy told the BBC: "What he's doing today is way more giving and way more thoughtful than me coming for 30 minutes and being a part of it, do you get what I mean?" He's already done all of it."

As the rapper painted, he was asked about the current Black Lives Matter movement and what the protests have meant to him. "I've been going to the protests. I've not even going there to grab the mic. I've just been saying, 'Yo, this is sick. I'm happy everyone is here,'" he explained. "I feel like I don't have the answers. A lot of people don't have the answers. But we're all just trying, we're all just getting together."

On the problematic 'All Lives Matter' retort, Stormzy said: "If we weren't oppressed, we wouldn't be shouting ... this is real pain, this is real life and this has been our reality for hundreds, thousands of years."

The rapper also revealed he had deleted social media as it became a "toxic" space. "I feel like you've got to protect the mental, do you know what I mean?"

While offline, the rapper has been busy working with his company #Merky to continue to support Black causes. Stormzy pledged £10 m over a 10 year period to “organisations, charities and movements that are committed to fighting racial inequality, justice reform and black empowerment within the UK.” He called his actions the “beginning of a lifetime commitment," and urged others to pledge to support causes that support Black people.

In a statement about the donation, Stormzy said: "I’m lucky enough to be in the position I’m in and I’ve heard people often dismiss the idea of racism existing in Britain by saying, ‘If the country’s so racist how have you become a success?!’ And I reject that with this: I am not the UK’s shining example of what supposedly happens when a black person works hard. There are millions of us. We are not far and few."