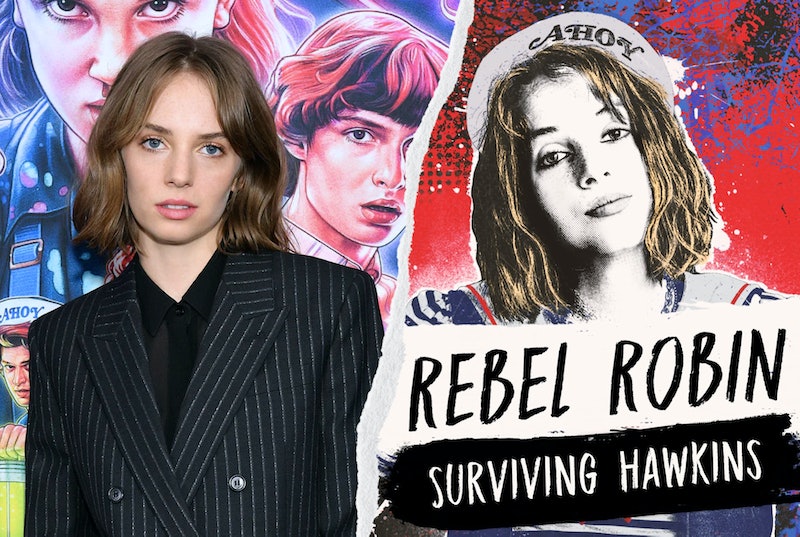 Robin Buckley didn’t enter the Stranger Things universe (multiverse?) until Season 3, but it didn’t take long for the character to steal fans’ hearts. Played by Maya Hawke with a heavy dollop of snark, Robin floats through Hawkins, Indiana, with a curious self-assuredness — the kind of confidence that’s hard to cultivate as a young outsider. Now, viewers will have a chance to find out how she got that way. Netflix has exclusively revealed to Bustle that a podcast, voiced by Hawke, will debut on June 29. The Rebel Robin: Surviving Hawkins podcast, which piggybacks on the previously announced tie-in YA novel Stranger Things: Rebel Robin, promises to follow the beloved character through her sophomore year at Hawkins High School.

“I love running from monsters and stuff, but I really love hallway conversations about feelings,” Hawke tells Bustle. The 22-year-old actor relished the chance to spend time with her character in day-to-day situations while recording the podcast, particularly because she could do so sans costume and makeup. “It was great, I got to wear my pajamas,” she said with a laugh.

It was also a “really, really fun” project for A. R. Capetta, the author of the YA novel that spurred the podcast. They conceived it as Robin’s “superhero origin story,” promising that she has a “triumph” in the end. What makes Robin so lovable, Capetta believes, is “seeing that character being a girl, being gay, being someone who actually got to really find power in being an outsider.” But of course, she wasn’t always that way, and hopefully, this prequel will help young people realize that “it’s OK to go through that part where you might feel like you haven’t found your people yet, but you have found yourself.”

“I know I’m not allowed to say anything that I know, but ... Robin is going to continue to be an amazing force in the show in the story.”

Hawke, a devotee of YA classics like Walk Two Moons and A Series of Unfortunate Events, also loves the coming-of-age aspect. If that’s not your cup of tea, she assures that getting to know any character in-depth will “enrich the fans’ experience of watching horrible things happen to them.”

Fortunately, though, it doesn’t sound like anything too horrible will happen to Robin just yet. “I know I’m not allowed to say anything that I know,” Capetta admits. “But I know that Robin is going to continue to be an amazing force in the show in the story.”

The book Stranger Things: Rebel Robin and the podcast Rebel Robin: Surviving Hawkins both premiere on June 29. The book is now available for preorder.

'Stranger Things: Rebel Robin' by A.R. Capetta
Bookshop
More like this
'Bridgerton' S3 Teases Exciting Social Season For Penelope Featherington
By Bustle
Liz Feldman Explains The 'Dead To Me' Series Finale & Fan Theories
By Brad Witter
17 Wednesday Addams Quotes For Every Situation
By Grace Wehniainen
The 'Ginny & Georgia' Season 2 Release Date Is Only A Few Weeks Away
By Martha Sorren
Get Even More From Bustle — Sign Up For The Newsletter