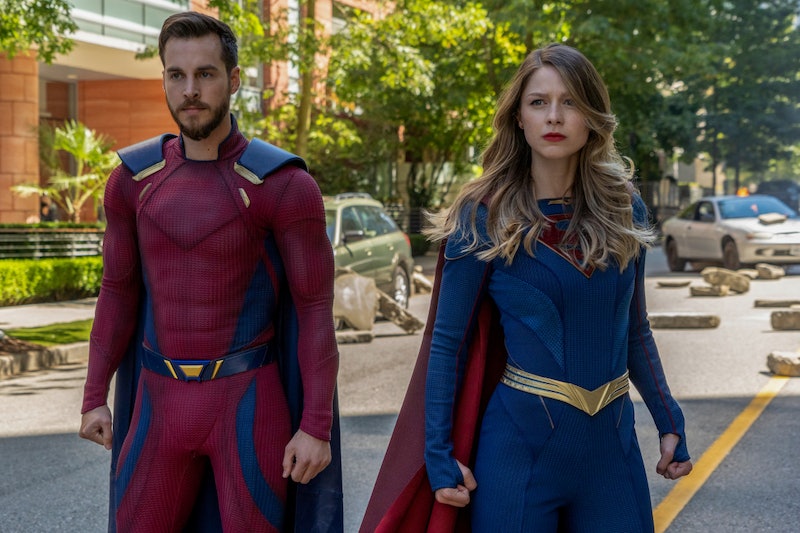 Supergirl has embarked on her final flight. After six seasons (and multiple network changes), the series was canceled by the CW in September 2020, making it the second show in the network’s DC Arrowverse to end following Arrow. As reported by Deadline, ratings for the series had dipped, and production was delayed by lockdown. They’d already been working around star Melissa Benoist’s pregnancy (she had her first child in September 2020), and she, the studio, and the network ultimately decided it was the right time to bid adieu to Kara Danvers. The series finale will air on Nov. 9, 2021.

“I mean, six years. You spend a lot of time with the crew, more than you do with your loved ones, a lot of times,” Benoist said of working on the show during an appearance on Jimmy Kimmel Live in early October. She added that while she’ll miss working with Supergirl’s cast and crew, she won’t miss the stunts. “I have to say it, I don’t know if I’ll miss flying. Because it hurt my body so much,” she said, laughing. “Somebody told me it’s been the same since Christopher Reeve [played Superman in 1978] ... just wires and like a harness that’s like a diaper.”

Filming for the final season of Supergirl wrapped in August 2021, and Benoist told Entertainment Weekly that it felt right to end Kara Danvers’ story when they did. “The end goal [of the final season] is [for Kara] to really come to terms with her powers and who she is as an alien on the planet, and then who she is as a human and finding a way to embrace both of them at once," Benoist said. “I don't know if I was ready to say goodbye to the characters ... I definitely will miss playing the role, but I was ready for a break, personally."

That doesn’t necessarily mean it’s the last time Benoist will don the cape, though. Supergirl has already inspired at least one spinoff in Superman & Lois, and there’s certainly room for the character to appear in the CW’s annual Arrowverse crossovers. "I am not opposed to putting on the suit again, and I know there probably will be opportunities to," Benoist told EW. "It would have to feel right for the character and I know they would probably do it justice. I love playing with [The Flash’s] Grant Gustin. I love Tyler Hoechlin and Bitsie Tulloch on Superman & Lois. So no, I'm not opposed to it."

On Instagram, Benoist reflected on what playing Supergirl meant to her after the cancellation. “To say it has been an honor portraying this iconic character would be a massive understatement. Seeing the incredible impact the show has had on young girls around the world has always left me humbled and speechless. She’s had that impact on me, too,” Benoist wrote. “She’s taught me strength I didn’t know I had, to find hope in the darkest of places, and that we are stronger when we’re united. What she stands for pushes all of us to be better. She has changed my life for the better, and I’m forever grateful.”

Benoist also paid tribute to Supergirl during DC’s FanDome event on Oct. 16 alongside co-stars Chyler Leigh, David Harewood, Katie McGrath, Jesse Rath, Nicole Maines, Azie Tesfai, Julie Gonzalo, Staz Nair, Mehcad Brooks, Jeremy Jordan, Chris Wood, and Peta Sergeant. In particular, McGrath talked about how she often gets letters from young girls saying that “until they saw Lena Luthor on TV, they didn’t think it was OK for girls to be studying science. And now there’s a lot of girls who are like, ‘I’m now in my fourth year in engineering, and I have you to thank for that, and the show to thank for that.’”

Though Supergirl is ending, it will always be remembered as one of the first series to feature a female superhero lead. Throughout its six seasons, the show told stories about inclusion, acceptance, and LGBTQ rights. Showrunner Robert Rovner told ComicBook.com in 2017 that he said he hopes Supergirl has taught young women to be as bold and brave as Kara is. “We focus[ed] on letting Supergirl be a voice of strength and optimism and hope,” he said. “It's not always her super powers that save the day. It's her voice and all of her strength that can inspire people that they don't have to be a superhero to make a difference, that they can use their own strength to persevere."

More like this
The First Trailer For 'That '90s Show' Includes So Many Nods To The Original Series
By Jack Irvin, Alyssa Lapid and Grace Wehniainen
'Bridgerton' S3 Teases Exciting Social Season For Penelope Featherington
By Bustle
What Jen Shah's Delayed Sentencing Could Mean For The 'RHOSLC' Season 3 Reunion
By Brad Witter and Jake Viswanath
What To Know About Simon Guobadia’s 3 Ex-Wives & Children
By Brad Witter
Get Even More From Bustle — Sign Up For The Newsletter