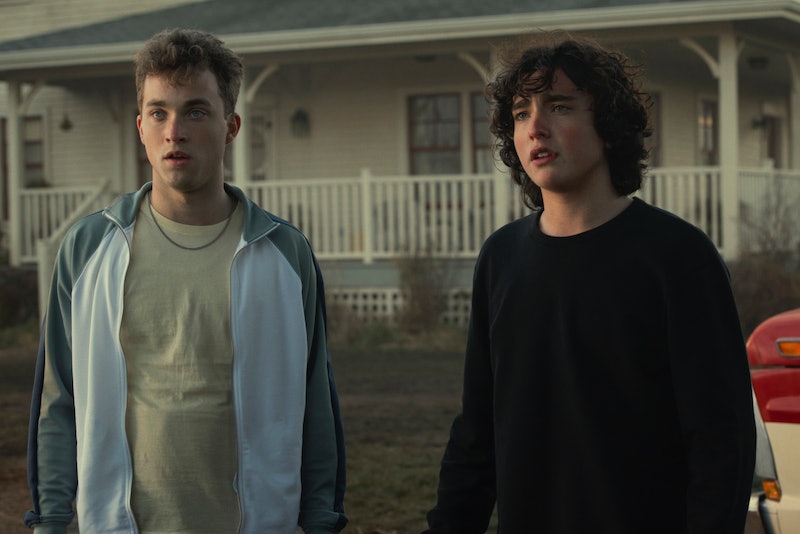 There have been many TV shows about the Man of Steel over the years, but Superman & Lois is the first to focus on his adventures as a father. The family drama follows Clark Kent (Tyler Hoechlin), his journalist wife Lois Lane (Elizabeth Tulloch), and their twin teen sons as they move back to the now-struggling farm town of Smallville. This marks a change from the broader Superman canon: though Clark had a son named Jason in the 2006 film Superman Returns, the twins are unique to the Arrowverse (Clark and Lois have also only appeared a few times on Supergirl and in the crossover TV events.)

Suffice it to say, there are a lot of questions about the boys. Here's an explainer.

When does Superman & Lois take place?

Superman & Lois is still part of the Arrowverse, which means you can expect eventual cameos from other shows like Arrow, Supergirl, and The Flash. It takes places years after the big "Crisis on Infinite Earths" crossover event — during which Oliver Queen died, the multiverse collapsed, and several Earths merged together to create "Earth Prime."

The episode opens with Clark narrating his life up until the events of the show, and we see an image of Lois pregnant with twins as well as them growing up as kids.

Why does Superman have two sons?

It has to do with the crossover event. At the start of "Crisis," Lois and Clark only had one newborn son, Jon Kent. But after Oliver Queen sacrificed himself and the universe got rebooted and rewritten, Clark ended up with two sons instead. He found out in the final moments of Part 5 of "Crisis," when Lois called him and said, "Clark, I need you to get to Metropolis now. It's the boys." A startled Clark answered, "The boys?"

Who are Clark's sons?

Jon (Jordan Elsass) and Jordan (Alexander Garfin) may be twins, but they're very different in terms of personality and appearance. Similar to Elsass' role on Little Fires Everywhere, Jon is the popular kid and the starting quarterback of the football team. Jordan, meanwhile, wears all black, experiences social anxiety, and struggles to fit in wherever he goes.

Are Jon and Jordan in the comics?

Only Jon Kent is from the comics. Both Marvel and DC Comics tend to reboot their stories and characters every few years, and in 2016, DC relaunched Superman under their "Rebirth" banner. They did away with the "New 52" version of Superman, who was younger and more impetuous, and made "Rebirth" Superman a husband and father. Jon was his young son who wore a cutely similar Superman suit, and he had to be taught how to use his Kryptonian powers.

“His son Jon allowed us to view Superman through new eyes,” co-writer Peter J. Tomasi told Entertainment Weekly. “It’s how I looked at Superman growing up. The idea of Superman as your father, people really seemed to connect with that.”

So who is Jordan Kent?

When Superman & Lois first released its casting call in 2019, some fans assumed that Jordan was adopted and that the show was adapting a version of the Super Sons, the comic book team-up name for Superman and Batman's kids Jonathan Kent (aka Superboy) and Damian Wayne (aka Robin). It sounded like Superman & Lois' generically labeled "Ethan" character was Damian, as he was described as "wildly intelligent" but with "a mercurial temperament" and "an inherent darkness." But it turns out that even the sunny Superman can have a biological cranky teenage son; as the opening of Episode 1 shows, Lois was pregnant with both Jordan and his brother.

What are Jon and Jordan's powers?

In the comics, Jon has practically the same powers as Superman does, including near-invulnerability, flight, super strength, and X-ray vision. But in the show, it's unclear if Jon has any abilities at all. While he's a whiz at football — and has suspiciously accurate aim — he doesn't appear to be particularly strong or fast, at least not yet.

Jordan is less like his dad, as he avoids social interaction and buries himself in video games (where he literally beats up Superman). But he ends up manifesting two of Superman's powers by the end of Episode 1: invulnerability and laser eyes. Fans will just have to wait and see if Jon will follow in his brother's footsteps, and if either of them eventually don a superhero cape, too.

More like this
Kathy Hilton’s 'RHOBH' Controversy Wasn’t Entirely Caught On Camera
By Jake Viswanath
'House of The Dragon' Episode 6 Will Take Place A Decade After Episode 5
By Kadin Burnett
The ‘Emily In Paris’ Season 3 Release Date Is Here, Plus The First Footage
By Bustle Staff
The ‘You’ Season 4 First Look Shows Joe’s New Identity And Potential Victims
By Bustle Editors
Get Even More From Bustle — Sign Up For The Newsletter