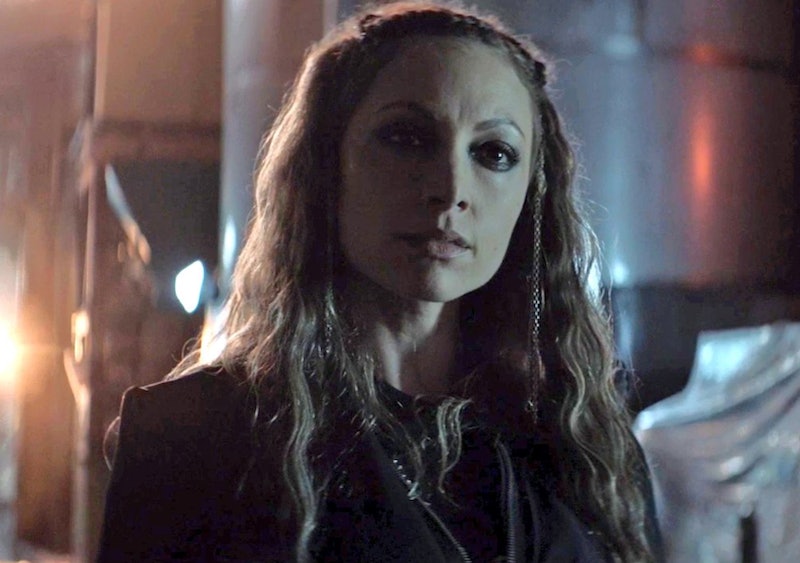 As the leader of the criminal island of Coryana, Safiyah Sohail has a number of mercenaries at her beck and call. One such villain is Leah Gibson's Tatiana, aka The Whisper, a mysterious sword-wielding woman who is deeply loyal to her boss. She kidnaps both Alice and Sophie Moore in Episode 2 of Batwoman, but it's still unclear who Tatiana's comics counterpart is.

In the final scenes of Episode 2, Crows Security agent (and Kate Kane's ex-girlfriend) Sophie chases Alice into an abandoned motor plant. She manages to apprehend Alice, but before she can cuff her, Tatiana appears with a katana and knocks Sophie out. Alice immediately recognizes Tatiana, who tells her that Safiyah is once again unhappy with her actions. Earlier in the episode, Alice released bats infected with toxins from Safiyah's rare Desert Rose plant on Gotham. But then she gave an antidote to Batwoman's ally, Mary Hamilton, so that a cure could be mass-produced.

Alice doesn't seem bothered that both Safiyah and Tatiana are angry at her, and claims she actually wanted to provoke Safiyah. Tatiana tells her that Alice will die for interfering in Safiyah's plans once more, and knocks her out to presumably take her and Sophie to Coryana for questioning.

In the comics, there is no major villain named The Whisper, but there is a seductive, redheaded female assassin named Whisper A'Daire, per ScreenRant. She was first created by Greg Rucka and Shawn Martinbrough in Detective Comics #743 in 2000. A former student of League of Assassins leader Ra's Al Ghul, Whisper was given a serum that grants immortality and shape-shifting abilities. She often appeared as a scaled snake woman, and at one point commanded a small team of shape-shifting men. Whisper eventually left the League of Assassins and resurfaced with the criminal organization Intergang. She tried to kill Kate once, but was defeated and badly burned.

It doesn't seem like Tatiana has much in common with Whisper, though. Rather, it seems like she's a reimagining of Tahani, aka The Knife. In the comics, Tahani was a beggar in Nigeria who was approached by Safiyah after she unknowingly killed one of Safiyah's problematic associates. Safiyah offered Tahani a new life on Coryana, and the two grew close until Kate washed up on the island. Tahani became jealous of Kate and Safiyah's new romance, and she wasn't shy about showing Kate how much she disliked her.

Kate eventually fell out with Safiyah and left the island. A heartbroken Safiyah then seemingly disappeared for a while, allowing the Kali Corporation to swoop in and sell off parts of the island. After about six years, Tahani reappeared to confront Kate for ruining both Coryana and Safiyah's happiness. She goes by the name The Knife, and works for the terrorist organization The Many Arms of Death — which Safiyah is later revealed to be the head of. Much like Tatiana, Tahani prefers to fight with blades, and she's deeply loyal to Safiyah even after many years.

It's unclear whether Tatiana is meant to be a mix of the two comic book characters or if she's a new character unique to the show. Regardless, she's likely going to be a formidable foe for the still in-training Ryan Wilder.