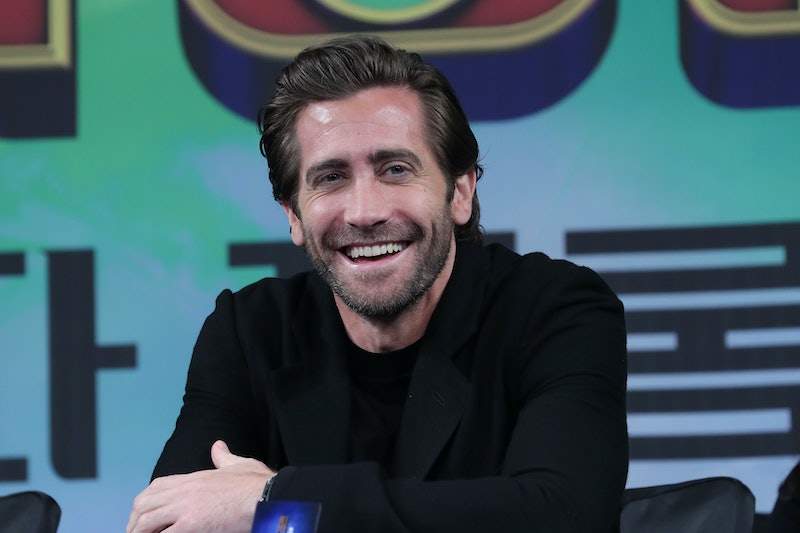 Jake Gyllenhaal and Taylor Swift's relationship may have ended years ago, but it looks like Swifties still remember it, all too well. After the Oscar nominee shared a childhood photo of himself on social media, Taylor Swift fans flooded Jake Gyllenhaal's Instagram comments with lyrics to her song, "All Too Well," which he reportedly inspired. On Monday, Sep. 28, Gyllenhaal shared a black-and-white photo of himself as a child in order to support New Eyes and The Inspire Project’s upcoming Project Human series.

"I’ve worn my glasses ever since I parted my hair meticulously with gel (see above), which is why NEW EYES has always been near and dear to my heart," the actor wrote on Instagram, before explaining the mission of the Project Human series. "I’m thrilled that they’ve partnered with @theinspireprojectus to create Project Human: Changing the Way We See the World, a speaker series coming to schools and remote learners this fall. Project Human is designed to spark conversations focusing on unity and equality. It’s an opportunity for students to interact with public figures and do what they do best: Keep ‘em on their toes!"

While Gyllenhaal may have been attempting to bring awareness to a good cause, Swift fans were a little bit distracted by the chance to reference "All Too Well" in the comment section. "You used to be a little kid with glasses in a twin-sized bed," many people wrote in response to the photo, quoting a line from the song's second verse. "I’ll be honest mate you set yourself up for this one," West Side Story star Rachel Zegler added in reference to the influx of song lyrics.

According to People, Swift and Gyllenhaal were first spotted hanging out together backstage at Saturday Night Live in October 2010; they were subsequently photographed getting coffee in Nashville, Tennessee in November, and walking arm and arm in Los Angeles in December. However, the pair called it quits in early 2011, and though the relationship was short lived, it left a lasting impact on Swift and her fans, and reportedly inspired many of the songs on her 2012 album, Red.

Despite sources telling outlets like Us Magazine that "All Too Well," a breakup ballad, is about Swift and Gyllenhaal's relationship, neither one of them have publicly confirmed where the inspiration came from. In fact, during a 2015 interview with Howard Stern, Gyllenhaal said he didn't know if his famous ex had reportedly written "All Too Well" about him. "You have a song written about you," co-host Robin Givens said, to which the actor coyly responded, "Do I?"

Two years later, his sister Maggie Gyllenhaal spoke about "All Too Well" during an appearance on Watch What Happens Live, when she was asked if she still had Swift's scarf in her possession. (Swift sings that she "left my scarf there in your sister's house" in the song's first verse.) "I never understood why everybody asked me about the scarf. What is this?" she said with a laugh. "I am in the dark about the scarf. It’s totally possible, I don’t know. I’ve been asked this before and I’ve been like, what are you talking about?"

Despite the painful origins of "All Too Well," Swift is proud of its enduring legacy among her fans. During a performance at an AT&T event in 2018, the singer explained that while it used to upset her to perform the song, "now, I play it and I think of the times I've played it in a stadium or an arena or my living room with you guys screaming the words back to me." She continued, "and so it changed it, and I wanted to thank you for changing it, because it's kind of nice to sing a song that you're proud of, but not feel pain while you sing it. It's very nice."

More like this
Taylor Swift & Her Mom Clap Back Against The “Shake It Off” Plagiarism Lawsuit
By Jake Viswanath
Twitter Is At Odds Over Taylor Swift’s Possible ‘All Too Well’ Oscar Run
By Brad Witter
Taylor Swift Calls Dwayne Johnson "The Man" After Revealing New "Taylor's Version" Song
By Jake Viswanath
Lauv Is No Stranger To Taylor Swift, Drake, Ed Sheeran, & Fame
By Alyssa Lapid
Get Even More From Bustle — Sign Up For The Newsletter