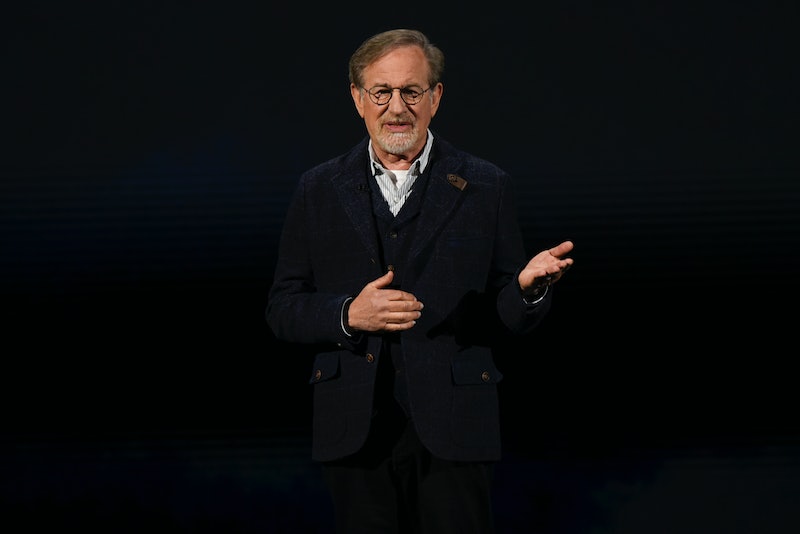 20th Century Fox just released the first look of the newest adaptation of the musical West Side Story, and it'll make fans of the Broadway show and film very ecstatic. With star crossed lovers Tony and Maria front and center, the first look at Steven Spielberg's West Side Story released on June 17 marks the start of a nearly year and a half countdown until the the release of the movie. The photo, though, definitely gives fans a little bit to hold on to until Dec. 18, 2020.

In a press release received by Bustle, the studio described this new adaptation of Romeo and Juliet-inspired musical as a film that "explores young love and tensions between rival gangs the Jets and the Sharks on the streets of 1957 New York." There was some speculation that this new version of West Side Story was going to be set in modern day, but star Rita Moreno, who also starred in the original 1961 film, set the record straight during a March appearance on Busy Tonight, and this new press release confirms that this movie might be modern, but it's still going to take place in the past. Spielberg, of course, will be directing and co-producing, and Tony Kushner is writing the script.

This new West Side Story is seemingly going to be an improvement on the 1961 film in several ways, most importantly in terms of casting. Yes, the original cast was incredibly talented — Moreno earned an Oscar for her supporting role as Anita, and George Chakiris also won for Best Supporting Actor. That said, the film is a prime Hollywood example of casting white actors to play Latinx roles.

In the 1961 West Side Story, many of the actors playing Puerto Rican characters weren't actually Latinx. Star Natalie Wood, who played the main character of Maria, was white. And, in fact, Moreno has spoken about the literal brownface used to achieve "ethnic" or Latinx skin tones on the white actors playing the Sharks. Even Puerto Rican actor Moreno was forced to wear dark makeup, calling it "like putting mud on my face" in a 2017 interview for Maria Hinojosa's "In The Thick" podcast, per HuffPost.

Needless to say, Spielberg has decided to go a different route, casting actual Latinx people to play Lantinx roles, like Rachel Zegler, a Columbian-American, who will play Maria. "I'm so happy that we've assembled a cast that reflects the astonishing depth of talent in America's multifaceted Hispanic community," Spielberg said after the casting was announced in January of 2019. "I am in awe of the sheer force of the talent of these young performers, and I believe they'll bring a new and electrifying energy to a magnificent musical that's more relevant than ever."

Zegler is clearly seen in the newly released photo, alongside her Tony, Ansel Elgort, and all of the main Jets and Sharks, including Ariana DeBose as Anita and David Alvarez as Bernardo, and Mike Faist as Riff.

Moreno will also star, taking on the role of Doc's widow, Valentina. “Never in my wildest dreams did I see myself revisiting this seminal work,” the actor said to Deadline following the November 2018 announcement. “And to be asked by Steven Spielberg to participate is simply thrilling! Then to work together with the brilliant playwright, Tony Kushner — what a glorious stew! I am tingling!”

If you're a fan of West Side Story, all of this news is the most beautiful sound you ever heard.

More like this
'Dirty Dancing's Jennifer Grey Wants Harry Styles To Be The Sequel’s Love Interest
By Grace Wehniainen
Amanda Seyfried Says This One Thing Stands In The Way Of ‘Mamma Mia! 3’
By Jessica Wang and Nola Ojomu
20 Celebrity Couples Who You Forgot Dated In 2002
By Jake Viswanath
Lisa Marie Presley Reviewed Baz Luhrmann’s ‘Elvis’ Movie On Twitter
By Grace Wehniainen
Get Even More From Bustle — Sign Up For The Newsletter