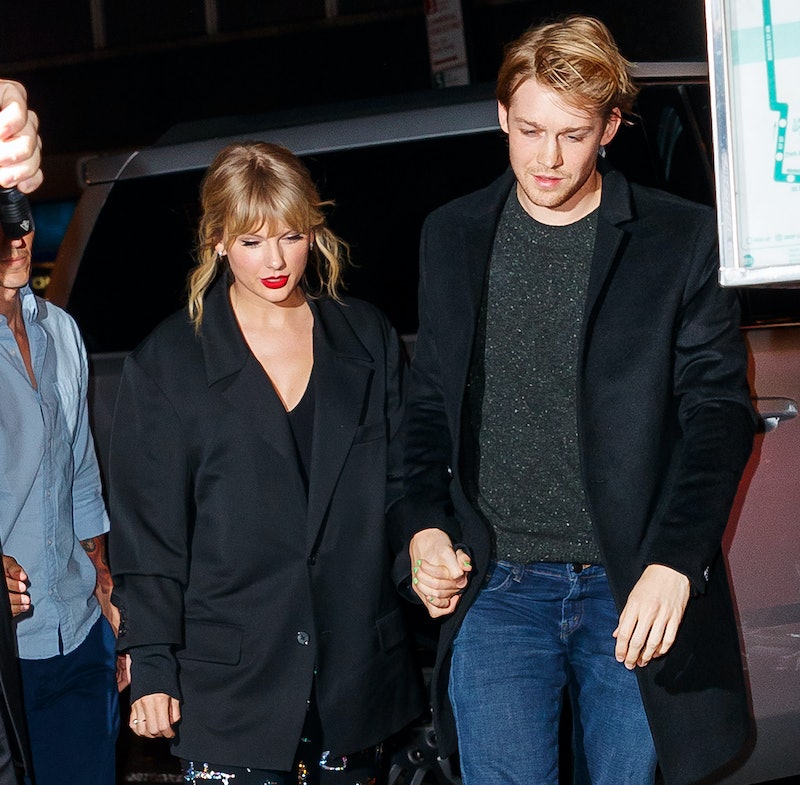 Taylor Swift knows that any relationship she's in will make headlines, but her four-year romance with Joe Alwyn has helped her focus on much more important things. During a conversation with Paul McCartney for the new issue of Rolling Stone, Swift opened up about their relationship, revealing that the actor helps her embrace "real life" rather than playing a character for the tabloids. She also shared some additional insight about the song "Peace" from her latest album Folklore, which was inspired by the struggles of dating as an A-list celebrity.

"'Peace' is actually more rooted in my personal life," she admitted, explaining that navigating serious relationships is difficult when you're in the spotlight. She also complimented McCartney on finding that balance with wife Nancy Shevell. "I know you have done a really excellent job of this in your personal life: carving out a human life within a public life," she said, adding that it can be scary to fall in love with someone who has a "very grounded, normal way of living."

Swift went on to explain that life in the public eye has not afforded her the amount of control she would like over certain situations. "I, oftentimes, in my anxieties, can control how I am as a person and how normal I act and rationalize things, but I cannot control if there are 20 photographers outside in the bushes and what they do and if they follow our car and if they interrupt our lives," she explained. "I can't control if there's going to be a fake weird headline about us in the news tomorrow."

While she revealed that Alwyn is "absolutely" understanding of those anxieties, Swift also said that being with the notoriously private actor has changed the way she sees herself and her relationships. "I think that in knowing him and being in the relationship I am in now, I have definitely made decisions that have made my life feel more like a real life and less like just a storyline to be commented on in tabloids," she said. Now, she makes decisions with her and Alwyn's privacy in mind. "Whether that's deciding where to live, who to hang out with, when to not take a picture — the idea of privacy feels so strange to try to explain, but it's really just trying to find bits of normalcy," she continued. "That’s what that song 'Peace' is talking about."

Though the music icon is happy to talk about being in love — even joking to McCartney that she has been writing fewer breakup songs since her "luck has changed" — neither she nor Alwyn have shared much about their relationship with the public. "I've learned that if I do [talk about it], people think it's up for discussion, and our relationship isn't up for discussion," she told The Guardian in August 2019, doubling down on her desire to keep their romance private.

Alwyn has echoed those sentiments, telling GQ UK in 2018 that "Someone's private life is, by definition, private. No one is obliged to share their personal life." In January 2019, he told Mr. Porter's The Journal that he doesn't see his relationship with Swift any differently than anyone else's relationship, even though they're both famous. "I don't think anyone you meet on the streets would just spill their guts out to you, therefore why should I?" he said.

While he doesn't like talking about their relationship to the press, Alwyn doesn't mind Swift sharing tidbits about their romance in her music. "No, not at all. No," he told The Times in Dec. 2019, when asked if her lyrics bothered him. "It's flattering." In other words, the actor is likely as big of a fan of "Peace" as Sir Paul McCartney himself.

More like this
Kanye West Apologizes To Kim K "For Any Stress I Have Caused" In Rare Interview
By Jake Viswanath
Adam Levine Denies Having An Affair — But Admits He “Crossed The Line”
By Jake Viswanath and Radhika Menon
Everything To Know About Taylor Swift’s 10th Studio Album, 'Midnights'
By Grace Wehniainen and Jake Viswanath
Christian Bale Sang With Taylor Swift & His Daughter Can't Believe It
By Radhika Menon
Get Even More From Bustle — Sign Up For The Newsletter