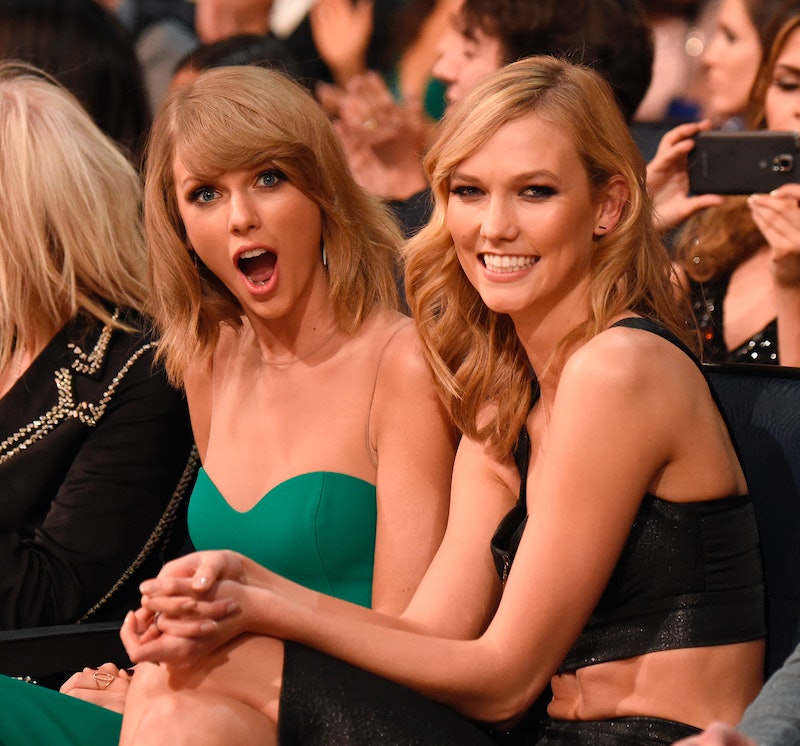 After fans began speculating that the Evermore bonus track "It's Time to Go" was inspired by the end of her high-profile friendship with Karlie Kloss, Taylor Swift opened up about the song's meaning via Instagram. On Jan. 8, the singer announced that the deluxe edition of her new album was available to stream, featuring two new bonus tracks: "Right Where You Left Me" and "It's Time To Go." In her post, Swift addressed the meaning of the songs, and the latter really grabbed fans' attention.

Following her description of "Right Where You Left Me" as "a song about a girl who stayed forever in the exact spot where her heart was broken, completely frozen in time," she moved on to the other bonus track. "'It’s Time To Go' is about listening to your gut when it tells you to leave. How you always know before you know, you know?" she wrote.

While the multi-Grammy winner didn't offer any details about any specific incidents where her gut was telling her to leave, Swift didn't kill speculation that the lyrics contained some digs at Kloss, her former best friend, either. Fans still have intriguing lyrics to puzzle over, including: "When the words of a sister come back in whispers / That prove she was not in fact who she seemed / Not a twin from your dreams / She's a crook who was caught."

Swift and Kloss became close friends in 2012 and soon became inseparable, thanks to their frequent road trips and hangouts — the singer even kept a room reserved for Kloss to stay in when she slept over — and the pair were often described as "twins" in the press. However, they haven't been photographed together since 2018, and rumors have been swirling in the years since that Swift and Kloss had a major falling out, especially since the singer did not attend her friend's 2018 wedding to Joshua Kushner. Kloss is also managed by Scooter Braun, whom Swift has been publicly feuding with since he purchased her master recordings without her permission in 2019.

While Swift has not publicly commented on the status of her friendship with Kloss in the past few years, the model told The New York Times in March 2018 that they were still close and "talk frequently" despite rumors to the contrary. "Don't believe everything you read," Kloss added. A year later, she touched on their friendship during an appearance on Watch What Happens Live. "Taylor is incredible, and I feel really lucky to call her a friend, and she's one of the hardest working women," she told host Andy Cohen about her relationship with Swift. (Swift, meanwhile, wrote in a March 2019 essay for Elle magazine that she had to learn about how to leave some friendships behind as she got older.)

Of course, it's entirely possible that Swift's new song wasn't inspired by her friendship with Kloss. There's also her more contentious experience dealing with Braun and Scott Borchetta of Big Machine Label Group, who oversaw the sale of her masters, as a possibility. "Fifteen years, fifteen million tears, begging 'til my knees bled," Swift sings in "It's Time To Go," which appears to be a nod to the battle over her masters. "I gave it my all, he gave me nothing at all, then wondered why I left. Now he sits on his throne, in his palace of bones, praying to his greed. He's got my past, frozen behind glass, but I've got me."

Regardless of which specific relationship — or relationships — inspired her to write the song, it's clear that Swift is in a better place after realizing it was time to go.

More like this
Everything To Know About Taylor Swift’s 10th Studio Album, 'Midnights'
By Grace Wehniainen and Jake Viswanath
There's A Taylor Swift Easter Egg In Ryan Reynolds' 'Deadpool 3' Teaser
By Marina Watts
Stormzy’s “Mel Made Me Do It” Is A Tribute To Black Talent & Success
By Catharina Cheung
How Ghosts Inspired Kesha’s New Music
By Jake Viswanath
Get Even More From Bustle — Sign Up For The Newsletter