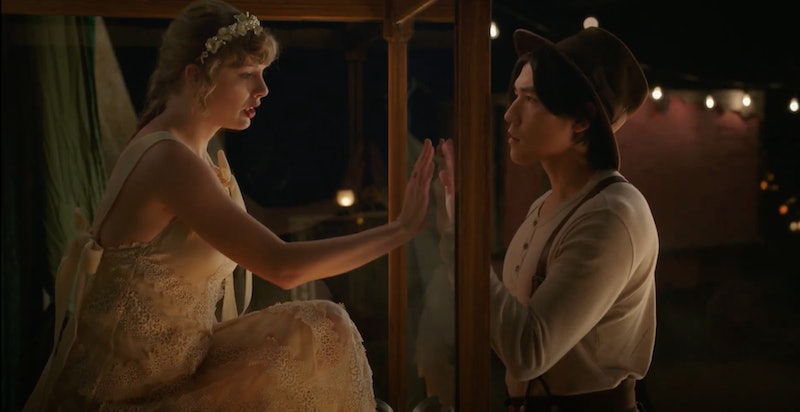 With every new Taylor Swift album comes another hunt for hidden easter eggs, and the singer's latest video just might hint at a big change in her life. Taylor Swift's "Willow" video is giving off major marriage vibes, making fans question (again) whether she's engaged or married to boyfriend Joe Alwyn. Fans first started speculating when she announced the video on Dec. 10 with a still of her in a bridal-esque dress on Instagram. And considering how often the pop star has sung about weddings, the idea that she may have walked down the aisle isn't too far-fetched.

The new visual continues where the one for folklore's lead single "cardigan" left off, as Swift sits on her piano before heading back into the twinkling piano tunnel once again. This time, however, she's attached to a golden string, a subtle nod to the folklore's "invisible string." The video sees the singer on a hunt through magical meadows and a child's play tent to find the person attached to the other end of the string. While her video co-star is (sadly) not Alwyn, she quickly meets her love interest through a glass box, and the white lace dress she's wearing is definitely raising some eyebrows.

Lyrics like "I'm begging for you to take my hand, wreck my plans, that's my man" and "Wherever you stray, I follow" only serve to prove that Swift is still committed to Alwyn, even if they haven't quite tied the knot yet. Finally, when the singer emerges from the piano back into her cabin, she finds that her lover is standing there, still attached to the golden "invisible string." They walk out into the woods together, which some fans are taking as a possible hint at their future. Whether it's a sign of marriage or engagement, or simply a proclamation of love, it's likely a sign that the couple is stronger than ever.

This is certainly not the first time that Swift's music has made fans think that she got hitched. Several songs from her 2019 album Lover had people convinced that she and Alwyn were either married or got engaged — especially the title track, which includes full-on wedding vows in the bridge. "Paper Rings" makes it clear that she'd marry Alwyn no matter how extravagant their ceremony was, and "It's Nice To Have A Friend" also mentions getting married in a church. While "Willow" doesn't give her fans any concrete answers, Alwyn — who was recently revealed as Swift's mysterious folklore collaborator William Bowery — also contributes to evermore as a co-writer on three songs, all but signaling that the two are still going strong.