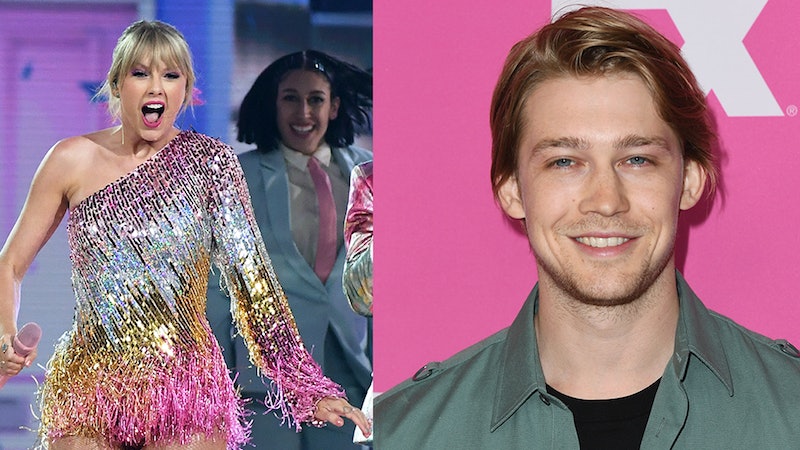 Taylor Swift doesn't often share the details of her romantic life with the media, but her songs have indicated she is happily in love. Her new album Lover seems to be primarily about her boyfriend, so are Swift and Joe Alwyn engaged? In "Paper Rings" off her new album Lover, Swift makes her intention to marry him one day very clear. She sings how she would marry him (note the tense), so there's no reason to pop champagne and celebrate this couple on their impending nuptials yet. But since Swift's "Paper Rings" lyrics state that she wants to marry Alwyn eventually, she appears to be committed to the British actor for life.

While "Lover" — another track believed to be about Alwyn — is a sweet romantic ballad, "Paper Rings" is so spunky and upbeat that you might miss all of the sappy lyrics. Considering the song "Lover" contains wedding vows, it's no surprise that Swift sees Alwyn in her future. But "Paper Rings" sneakily displays how this pop star sensation is dedicated to him no matter the circumstances. Because, although Swift is reportedly the highest-paid celebrity of 2019, she doesn't need a fancy engagement ring or wedding band to say "I do" to Alwyn. "I like shiny things, but I'd marry you with paper rings," Swift sings. "Uh-huh, that's right/Darling, you're the one I want."

Over the course of their three-year relationship, fans have pieced together many details of Swift and Alwyn's relationship from her lyrics, but "Paper Rings" gives some more insight into their timeline. Like how she immediately was intrigued by him after they met ("Went home and tried to stalk you on the internet"), but then played "cat and mouse for a month or two or three." She also implies that they are living together with the line, "Now I wake up in the night and watch you breathe." But getting married is something they are waiting on — even if it seems inevitable based on her lyrics.

Like in "Lover," Swift gives an interpretation of "for better, for worse, for richer, for poorer, in sickness and in health" wedding vows, singing, "I want to drive away with you/I want your complications too/I want your dreary Mondays/Wrap your arms around me, baby boy." Her lyrics suggest they've both waited their whole lives for this, so Swift's dedication to Alwyn doesn't appear to be one-sided and he may have marriage on his mind as well.

If (or when) they get married, there is reason to think they might do so secretly. Swift has been in the spotlight since she was a teenager while Alwyn has recently obtained fame, thanks to roles in The Favourite and Mary Queen of Scots. But, outside of Swift's lyrics, their relationship is private and so any engagement or wedding celebrities may be kept private. After all, Swift sings in another Alwyn-inspired song, "Miss Americana & The Heartbreak Prince," that she is "voted most likely to run away with you" — which could mean they've spoken about eloping. And some fans already think they have eloped with "Paper Rings" being a celebration of their first wedding anniversary since paper is the traditional gift.

Of course, Swift's very personal lyrics only present a glimpse into what her life with Alwyn is like. So whether a marriage is impending or not isn't 100% certain. But Swifties are thrilled that, after so many lyrics about failed relationships, Swift has found the person who she wants to spend the rest of her life with.

More like this
Taylor Swift & Her Mom Clap Back Against The “Shake It Off” Plagiarism Lawsuit
By Jake Viswanath
Taylor Swift Calls Dwayne Johnson "The Man" After Revealing New "Taylor's Version" Song
By Jake Viswanath
Who Is Camila Cabello Dating? She's Getting Cozy With Lox Club CEO Austin Kevitch
By Radhika Menon
Who Is Bad Bunny Dating? Gabriela Berlingeri's Vocals Are Featured On His Song "En Casita"
By Radhika Menon
Get Even More From Bustle — Sign Up For The Newsletter