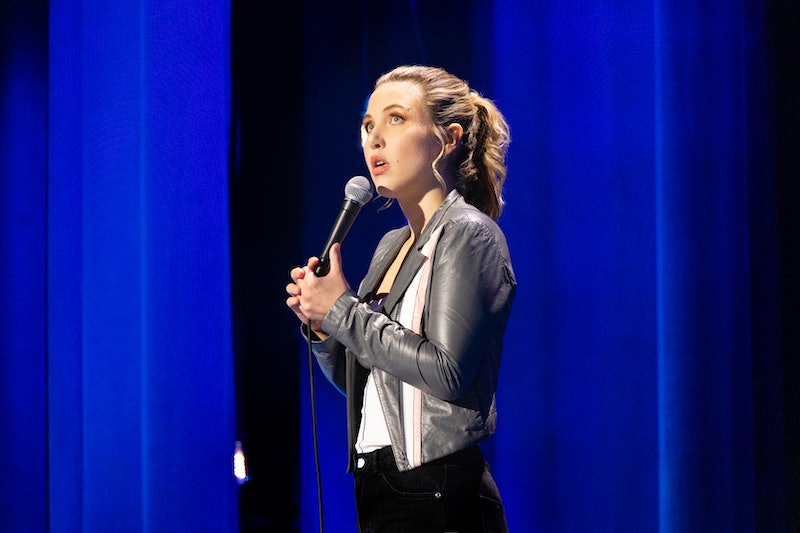 As you scroll through all the titles in Netflix’s comedy lineup, Taylor Tomlinson is a name you’ll see more than once — and if you don’t already know the popular performer, it’s time to get acquainted.

Tomlinson is a 28-year-old comedian whose performance style Vulture compared to “the coolest youth pastor on the fellowship team.” The comparison is spot-on because she actually grew up in church, she told the outlet, though the content of her comedy probably shouldn’t be repeated in the pews. In Tomlinson’s most recent special, for example, she compares the trauma of seeing her mom’s dead body to the trauma of seeing her first penis and, uh, you’ll have to watch to see which she rates worst.

In addition to Tomlinson’s Netflix work and touring, she’s also active on TikTok. There, more than 1.5 million followers tune in for her bite-size musings about everything from wishing she’d finished college because she’d “really like more hoodies” to mental health, religious trauma, and the behind-the-scenes realities of her “glamorous” job.

Here’s everything you should know about Tomlin’s comedy, and where to see her next.

Tomlinson has two Netflix specials you can watch right now: Quarter-Life Crisis, which was released in 2020, and Look At You, which just dropped this March and features “an intimate look at her struggles with mental health, grief, and dating.”

Tomlinson has been linked to Sam Morril, Ansel Elgort’s biological cousin, as revealed on WTF with Marc Maron. The couple began dating shortly before lockdown started in 2020 and documented the (mis)adventures of living together so soon in an Instagram series, New Couple Gets Quarantined.

Though Tomlinson joked to Daily Beast at the time that they were “basically a Marriage Story origin story,” she acknowledged that being creative together “would keep [them] sharp and creative and not at each other’s throats.” And it must have worked because the couple seems to still be together today. Upon the release of Look At You, Morril wrote to celebrate her on Instagram. “You can tell a special is good when it makes comics feel lazy,” he said at the time, to which Tomlinson responded with a heart emoji.

Tomlinson’s Deal With It tour is happening right now and will run through early May — at which point, the comedian has “very serious plans to disappear into the wilderness,” according to her Instagram.

More like this
Here’s Everything Coming To & Leaving Netflix In February
By Jake Viswanath
'The Queen’s Gambit' Season 2 Tweet Wasn’t From Anya Taylor-Joy
By Mary Kate McGrath, Jack Irvin and Grace Wehniainen
Love Is Blind’s Natalie Claims Shayne Signed Up For 'Perfect Match' While They Were “Still Together”
By Brad Witter
'Love Is Blind: After The Altar' Season 3 Has A Release Date & It's Very Soon
By Grace Wehniainen
Get Even More From Bustle — Sign Up For The Newsletter
From hair trends to relationship advice, our daily newsletter has everything you need to sound like a person who’s on TikTok, even if you aren’t.