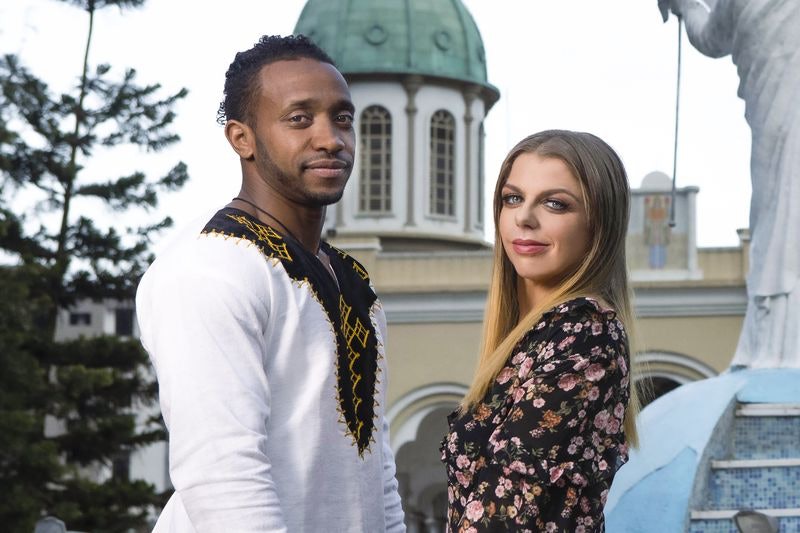 TLC’s reality show about long-distance romance is still going strong. Every season, 90 Day Fiancé features an overseas couple meeting for the first time and applying for a K-1 visa, which lets an engaged partner of a U.S. citizen enter the country. But there’s a huge decision to make in the 90 days following that application: The couple has to decide if they really want to get hitched or not. If they call it quits within that time frame — either because of cultural differences or strained family dynamics — the fiancé will be sent back to their home country.

Season 9 of 90 Day Fiancé introduces seven (mostly) new couples aiming to make it to the altar. Based on the season’s trailer, the Americans’ other halves hail from locales like Ethiopia, Cameroon, and Venezuela, and it looks like all of the couples end up clashing in one way or another — whether it’s over alcoholic brothers, pregnancy scares, or disagreements about how their wives should dress on the beach. Amid the drama, there are familiar faces; one of the couples is continuing to try to make their relationship work after a turbulent experience on the 90 Day Fiancé spinoff The Other Way.

Here’s everything else to know about the Season 9 cast members.

Ariela, 30, is from Princeton, New Jersey, while Biniyam, 31, is from Ethiopia. The couple was featured on Season 2 of 90 Day Fiancé: The Other Way. They first met when they crossed paths in a street in Ethiopia, and after three months together, Ariela was pregnant with their son, Aviel. Ariela eventually returned to America when Aviel needed surgery, and the distance caused Ariela and Biniyam’s relationship to fall to the wayside. Biniyam was also criticized by viewers for often going out and partying in Ethiopia while Ariela took care of their son.

This season, they reaffirm that they still intend to get married. But it looks like Biniyam’s family is not too happy with his choice of a fiancée, and in one key confrontation, Ariela gets a drink thrown in her face.

Emily, 29, lives in Salina, Kansas, but moved to Xi’an, China, to teach English. It’s there that she made a connection with Kobe, a 34-year-old from Cameroon, during a night out on the town. After just a few weeks, they were engaged, and Emily found out she was pregnant. Emily returned to the United States and Kobe was meant to follow shortly after, but the pandemic put a halt to their plans. Now, Emily lives with their son, and the season explores their relationship as they try to transition to living together in the States.

Kara, 29, is from Charlottesville, Virginia, and Guillermo, 23, is Venezuelan and living in the Dominican Republic. They met when Kara went to the Dominican Republic for a work trip, and after she left, the pair kept in touch. When Kara’s job required her to relocate to the Dominican Republic, she got engaged to Guillermo and moved in with him. But similar to Emily and Kobe, the pandemic threw a wrench in their plans, and Kara had to return to the United States. The season opens with Kara and Guillermo being apart for over nine months. Guillermo is willing to move to Charlottesville, but tensions over Kara’s party girl lifestyle arise. “You have a past of cheating on people,” Guillermo accuses at one point.

Bilal is a 42-year-old from Kansas City, Missouri, and Shaeeda is a 37-year-old from Trinidad and Tobago. The duo met online and proposed to each other after just a week. Unsurprisingly, they only realized later that their lifestyles clashed: Bilal is a divorced father of two, while Shaeeda lives with her parents and is ready to start a family of her own. But Bilal is unsure about having any more kids, and on top of that, he’s intent on having Shaeeda sign a prenup before the wedding. “The guy I fell in love with is the guy I met in Trinidad,” Shaeeda tearfully says in the series, to which her mom responds that she has to jump on a plane and come right back home.

In a preview for the season, Jibri joked that Miona immediately started flirting with him when they met online, but he initially pretended to be interested in her friend. (“That’s so stupid,” she said while rolling her eyes.) The 28-year-old Jibri hails from Rapid City, South Dakota, and met 23-year-old Miona while he and his band were performing in her home country, Serbia. Miona was immediately smitten after seeing him perform, and Jibri proposed to her shortly after. She initially wanted them to move to Los Angeles together, but when the season starts, Jibri reveals he’s instead moved back into his family’s home in South Dakota. “Living with his parents is definitely going to have to change,” Miona says.

At 48 years old, Yvette of Albuquerque, New Mexico, is nearly twice as old as Mohamed, a 25-year-old from Egypt. Their shared love of fitness led to Mohamed sliding into Yvette’s DMs, and they eventually met face to face in Egypt. They soon got engaged, but the show explores how their huge age gap starts to cause issues. Yvette has a 12-year-old son with special needs, and early on Mohamed expresses disapproval over Yvette’s liberal lifestyle. In one confrontation, he accuses her of being too “naked” while wearing a bikini on the beach. She responds, “I don’t want to be judged, I’m a grown ass woman.”

Austin-based Patrick, 31, met Thais, 25, while traveling to Brazil to reconnect with family. He needed to brush up on his Portuguese, so he turned to a dating app to hopefully find a teacher. Thais swiped right, and the two went on several dates over the course of several trips to Brazil. He eventually proposed to her and asked her to move back to Texas with him. But Patrick is still getting over a previous divorce, and his living situation — with a brother who starts drinking at breakfast — is not exactly the lavish American lifestyle that Thais had envisioned.

More like this
RHOP’s Robyn Dixon Explained Why Juan Paid For Another Woman's Hotel Room
By Brad Witter
Zach Swears He Didn’t Look Up Contestants Before The Bachelor Began Filming
By Brad Witter
Airris From 'MAFS' Says He Doesn’t Regret Going To Decision Day With Jasmine
By Brad Witter
Shaq Might've Spoiled His Relationship Status With Kirsten After 'MAFS'
By Brad Witter
Get Even More From Bustle — Sign Up For The Newsletter
From hair trends to relationship advice, our daily newsletter has everything you need to sound like a person who’s on TikTok, even if you aren’t.