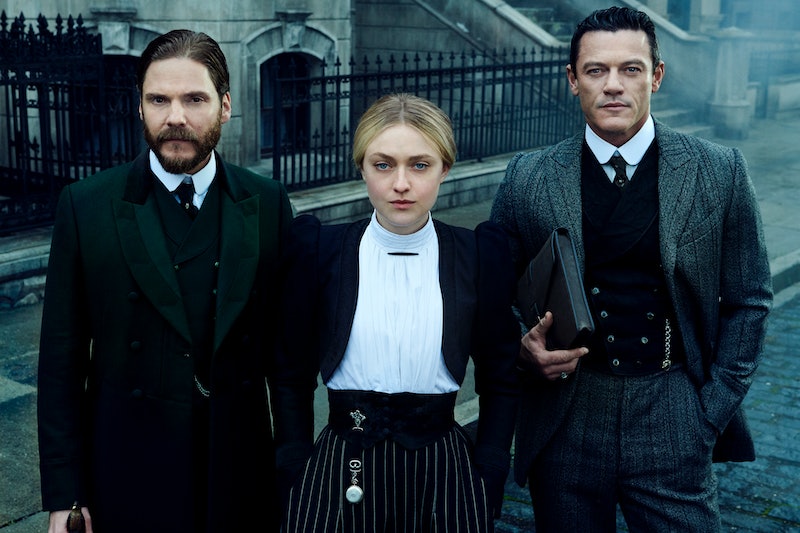 Two years after The Alienist premiered on TNT, The Alienist: Angel of Darkness continues the first season’s lurid criminal investigations. This time, the focus is on Sara Howard (Dakota Fanning), now a private detective. Based on Caleb Carr’s 1997 sequel to The Alienist, Angel of Darkness takes place right before the Spanish-American war. When Ana Linares, the infant daughter of the Spanish Consular, is kidnapped, Sara reunites with Dr. Kreizler (Daniel Brühl) and John Moore (Luke Evans) to find her. If you want to know the Angel of Darkness book ending ahead of the show's premiere, read on, as the trio's research puts them on a collision course with a cunning serial killer named Libby Hatch.

The story opens when Ana Linares is kidnapped in Central Park while on an outing with her mother. Sara, who has just opened her own firm, is presented with the case by Ana's mother. She's been forbidden from going to the police by the Consulate, she tells Sara, but she swears she saw her daughter on a train with someone malicious-looking. Sara soon realizes that the case has the potential to explode the political and social tensions brewing around the city, so she enlists the help of Dr. Kreizler and John Moore. Eventually, their digging leads them out of Manhattan to the small town of Ballston Spa in Upstate New York, where a mysterious woman's past is casting a pall over the town. She's revealed to be the monstrous Libby Hatch, a serial killer who's kidnapped and murdered children before.

The bulk of the book involves them putting Libby Hatch on trial. She's very obviously guilty of numerous murders, but their efforts to get Libby behind bars and reveal Ana's location are repeatedly stymied. Libby's attorney Dr. Clarence Darrow is very argumentative, and the jury is also hesitant to believe a woman could ever kill a child at all. The court case ends up being lengthy but inconclusive, and suddenly the trio is faced with taking justice into their own hands.

In a truly wild twist, they end up calling Theodore Roosevelt, who was the head of New York police in the first book and is now the head of the U.S. Navy. He ends up bringing in torpedo boats and the U.S. Navy, and they engage in an all-out brawl with Libby and her gang. It's through this fight that they're finally able to get Ana back alive and return her to her mother.

In the end, it's revealed that Ana's father had no intention of ever involving the Spanish Consulate in helping find his daughter — essentially accepting that she was gone forever — because he didn't want to give Spanish extremists a reason to declare war against the United States. Of course, days later, the war happens anyway, leaving the trio to reflect on just how much daughters, and women in general, are devalued around the globe.