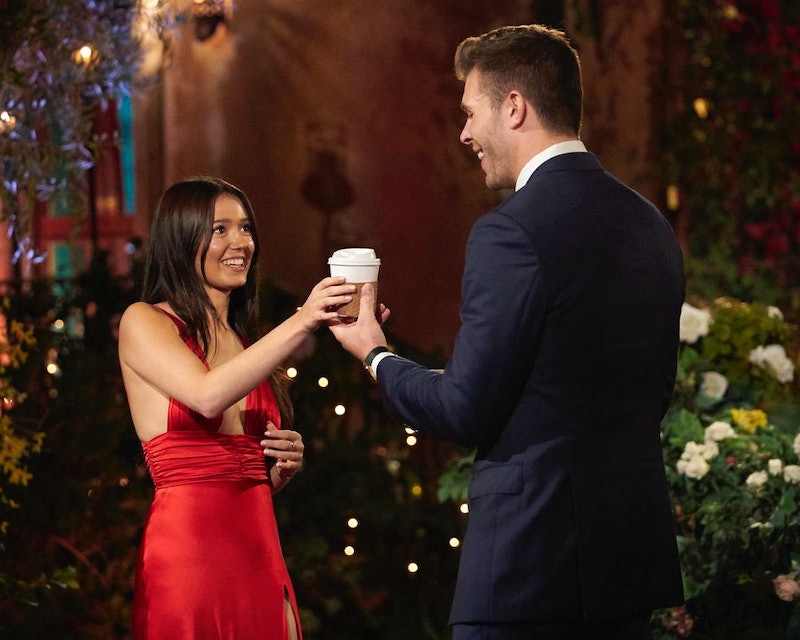 In her Bachelor Season 27 contestant bio, Greer Blitzer said she’s “not afraid to speak her mind,” but words have consequences. Months before she made her debut in the Jan. 23 premiere, the 24-year-old Houston, Texas native had already come under fire for her past social media activity. On Oct. 1, a Reddit user posted screenshots of several of Greer’s tweets from 2016 in which she defended photos of a fellow white high school student in blackface while wearing a Tupac t-shirt. Other resurfaced screengrabs in the same thread also showed that the medical sales rep, who now lives in New York City, supported Donald Trump in his 2016 presidential bid.

More than three months after the tweets surfaced, Greer issued an apology via her Instagram Stories on Jan. 24. “In my past, I have made some uneducated, ignorant and frankly, wrong, comments on my social media accounts,” she wrote, adding that she’s learned lessons on her journey of growth. “In particular, in 2016, I used misguided arguments on Twitter to defend a student who dressed in Blackface as Tupac for Halloween.”

Greer continued, “I am deeply sorry to those I have hurt, especially those within the Black community, not because these screenshots have resurfaced, but because I ever shared those harmful opinions at all. Time and age do not excuse my actions, but this is not a reflection of who I am today. I do not stand by or condone the damaging opinions and behaviors / shared during that stage of my life and will forever regret making those offensive remarks.”

At the time the racist photos in question were taken, NBC’s local Houston affiliate KPRC reported on the incident that had caused a stir in the community. According to the station, the screenshot of a Snapchat video showed the teen from Houston’s Lamar High School in blackface at an off-campus party, which students who sent the photo to the news outlet said was organized by a secret social club called Wichaka. The sophomore was told to wear the costume by upperclassmen as part of an initiation ceremony.

Despite the negative pre-premiere exposure, Greer still impressed Zach, earning his first impression rose. In a recent interview with Bustle, the Bachelor explained more about their quick connection. “The whole night is chaotic. You’re getting dragged in a million different directions and quickly trying to grab something to eat, and then you’re going over here and then there. You get so wrapped up in your own head,” Zach explained. “When we did have a chance to have a conversation, what she was able to make me feel during that moment was — OK, it’s calm, it’s comforting, let’s escape this chaos for a bit. That’s something I was needing that night.”

It seems things won’t be quite as smooth sailing for long though, given that the Bachelor Season 27 trailer shows Greer crying as Zach confessed that he’d “let the women down.” Zach has yet to comment on whether or not he felt let down by his second rose recipient’s past behavior though.

More like this
Bachelor Zach’s “Dream Job” Has Nothing To Do With His Work In The Tech Industry
By Brad Witter
10 Photos Of The Wildest Limo Arrivals From 'The Bachelor' Premiere
By Brad Witter
Zach Swears He Didn’t Look Up Contestants Before The Bachelor Began Filming
By Brad Witter
The Bachelor’s Christina Mandrell Comes From One Of Country Music’s Most Famous Families
By Brad Witter
Get Even More From Bustle — Sign Up For The Newsletter
From hair trends to relationship advice, our daily newsletter has everything you need to sound like a person who’s on TikTok, even if you aren’t.