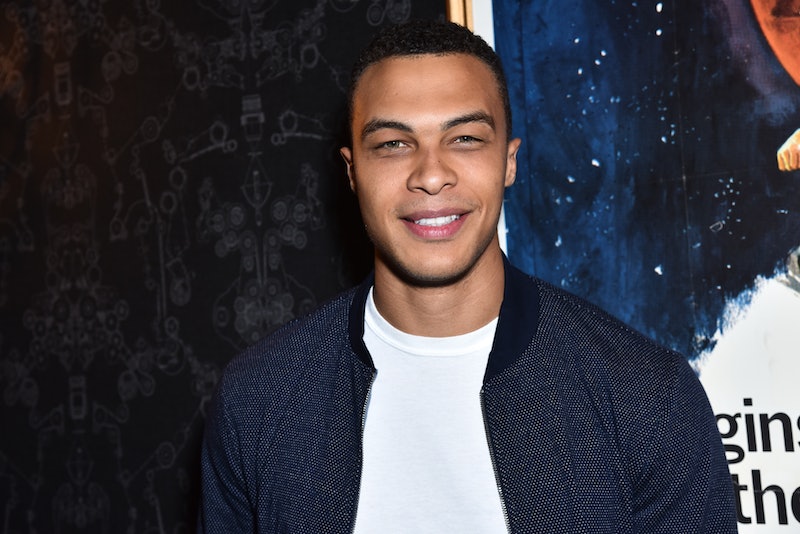 Clare Crawley's frontrunner has a past as a model, but it's not all glamour shots. As it turns out, Bachelorette contestant Dale Moss used to model Halloween costumes for Party City — which was all fun and games until photos of the reality star dressed as a taco made the rounds on the internet. Fortunately, it seems like Moss has learned a valuable lesson from the whole ordeal.

It all started late last week, when diehard fans of the franchise began posting photos of Dale posing in a variety of different costumes from the party supplies chain. There were pictures of the former football player dressed as Superman (with inflatable muscles), a Roman Centurion, and yes, even a taco with a matching costume for dogs. And while they're certainly not the model shots fans were expecting from Clare's first impression rose recipient, they are probably the most wholesome modeling photos in existence.

Of course, just about every Bachelor fan on Earth promptly began reposting the images to other fan accounts, which eventually caught the attention of Dale himself. As captured by the @commentsbybachelor Instagram, he commented on a "Dale Taco" meme inspired by his now-infamous costume, which was originally posted by The Betchelor's Instagram account. "Love it!" he wrote. "Read your contracts kids ;) Could be worse."

As fans will remember, Dale is currently rumored to be engaged to Clare after it was reported that she left her season of The Bachelorette to pursue a relationship with the model. Neither Clare nor ABC have confirmed the reports, but a teaser for upcoming episodes does show Clare's contestants getting frustrated with their chemistry and questioning whether they knew each other before the show. While she clarified that they had never spoken before filming, Clare did admit to Insta-stalking him before her season began.

Although the news still hasn't been confirmed, reports indicate that former Bachelor contestant Tayshia Adams will replace Clare to finish out this season of The Bachelorette. At of now, Clare has not clarified her relationship status, as her season is currently still airing, but she did tell Entertainment Tonight in an Oct. 13 interview that she was "very happy," further fueling speculation that she does indeed leave the show.