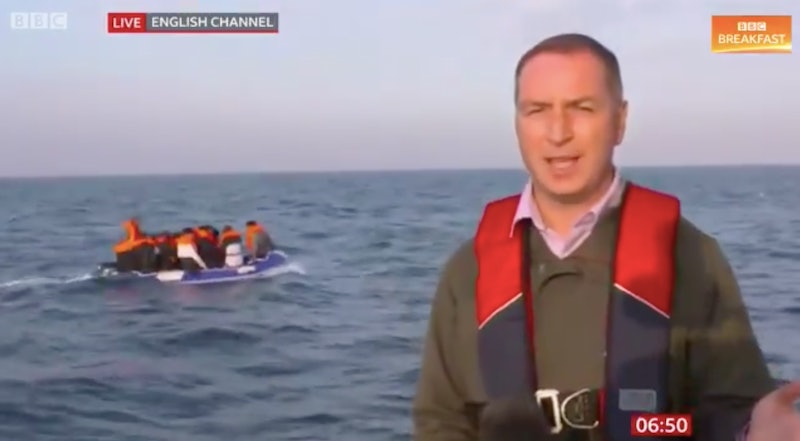 The BBC is facing criticism again this week after airing footage of refugees travelling by boat across the English Channel. The news broadcast, which was presented by Simon Jones, showed a crowded dinghy attempting to reach Dover while the refugees inside bailed out water with plastic receptacles. The video – which has been labelled by viewers and advocacy groups as de-humanising – comes just a few days after controversy surrounding the BBC's use of the n-word in a news report.

The footage opens with Jones telling the camera: "We came across this boat about half an hour ago, just spotted it on the horizon."

He continues: "We have seen them trying to get water out of the boat. They are doing that at the moment. They’re using a plastic container just trying to bail out the boat, so obviously, it’s pretty overloaded there. People are wearing life jackets, but it is pretty dangerous." He then asked the people on the boat where they had come from and if they were OK. The footage ended when the UK Border Force arrived.

The backlash has centred around the lack of sensitivity in the report. One Twitter user wrote: "Aghast & ashamed at the way @BBC has reported the desperation of people trying to seek asylum & build a better life in the UK." Another said: "This is utterly sick. If people are in life threatening trouble you help them. You don’t give a sort of sports commentary. What have we become?"

The BBC responded to criticism with the following statement: "This report was a stark illustration of the significant risks some people are prepared to take to reach the UK. Channel crossings is a topic of huge importance and we always endeavour to cover the story sensitively.

"In this instance the Dover Coastguard were aware of the boat before our crew spoke to them and at no point did they, or those in the boat signal that a rescue operation was required. The Coastguards instead alerted Border Force, who then safely picked up the occupants and took them to shore."

Sky News has also come under fire for similar footage from the English Channel. Ofcom received 496 complaints about their coverage, which showed correspondent Ali Fortescue speaking to refugees in a boat. On August 12, Sky issued a statement to the Metro saying "‘We are assessing the complaints against our broadcasting rules, but are yet to decide whether or not to investigate."

Advocacy groups including The Worldwide Tribe and Choose Love have criticised the coverage from both networks, with the latter encouraging followers to write to BBC and Sky bosses to complain and providing a template to do so.

For the BBC, this backlash comes not long after another controversy about sensitivity within its reporting. The broadcaster received 18,600 complaints after using the n-word in a report about a racially-aggravated attack on musician and NHS worker K-Dogg. They initially defended the use of the word, saying it was "editorially justified," before backtracking and issuing an apology.

As a result, over 100 Black British professionals (spearheaded by the InfluencHers) have written an open letter calling for a 24-hour boycott of the BBC, starting at 9 a.m. on Wednesday August 19, 2020.