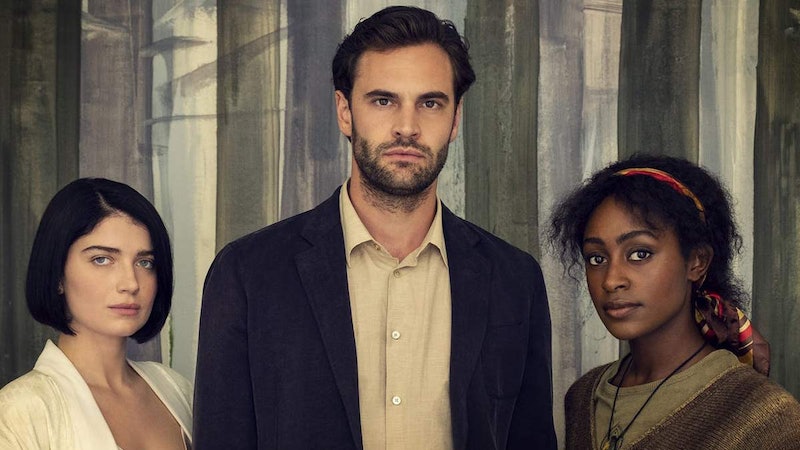 With a series adaptation of Sarah Pinborough's breakout novel set to begin streaming on Netflix on Feb. 17, now's the perfect time to take a look at the Behind Her Eyes book ending. We're talking about an ending so notorious that it became part of HarperCollins' global marketing campaign, which used the hashtag #WTFThatEnding to promote the book. Whether you don't remember what happened in Behind Her Eyes, or you aren't bothered by spoilers, keep reading for an in-depth look at the book's final chapters. Major spoilers for Behind Her Eyes follow.

A thriller in the vein of Gone Girl and The Girl on the Train, Behind Her Eyes centers on three people — Louise, David, and Adele — who find their lives caught in a spiral of entanglements. Everything seems innocent enough when Louise meets David in a bar, but things get awkward when Louise reports to work soon after their shared kiss, only to learn that David is her new, married boss.

In spite of the fact that he's married, David continues to pine after Louise, who soon befriends his wife, Adele. As Louise becomes increasingly involved in David and Adele's life and marriage, she begins to suspect that something is very wrong. David is revealed to be a controlling, overbearing lover, but Louise can't help but wonder if his anger issues stem from Adele's relationship with her old friend, Rob.

It turns out that Adele and Rob became friends while they were staying in a psychiatric hospital. They bonded over their night terrors — which Louise also has — and their practice of lucid dreaming — which Louise also learns — to control their nightmares. David noticed the strength of Adele and Rob's bond when he came to visit his wife in the hospital, and Rob would later come to live with the couple after completing his treatment.

And that's where all the trouble began.

You see, Rob knew that lucid dreamers can communicate with one another in the dream state. They can even swap bodies by passing through a door that appears in their nighttime visions.

Rob asked Adele to swap bodies with him temporarily, just for fun. Rob — in Adele's body — then murdered Adele — in Rob's body — and stashed the corpse in a nearby well. Rob knew that David planned to leave his wife, but, being obsessed with David, he couldn't let that happen. Rob-as-Adele blackmailed David, threatening to frame him for the murder of "Rob."

It's important to note that all of this happens before Louise comes into the picture. When she befriends "Adele," she's really getting close to Rob. Because Louise shares Adele and Rob's problems with night terrors, and because she and "Adele" are friends, it's easy for Rob to convince her to lucid dream with him.

Rob-as-Adele forces Louise to swap bodies with him and kills Louise-as-Adele. By all appearances, Adele has died by suicide. Rob-as-Louise marries David — who has remained oblivious to the body-switching all this time. The novel ends with Rob plotting to kill Louise's young son, presumably because he could recognize the change in Louise.

Netflix's Behind Her Eyes is streaming on Feb. 17.