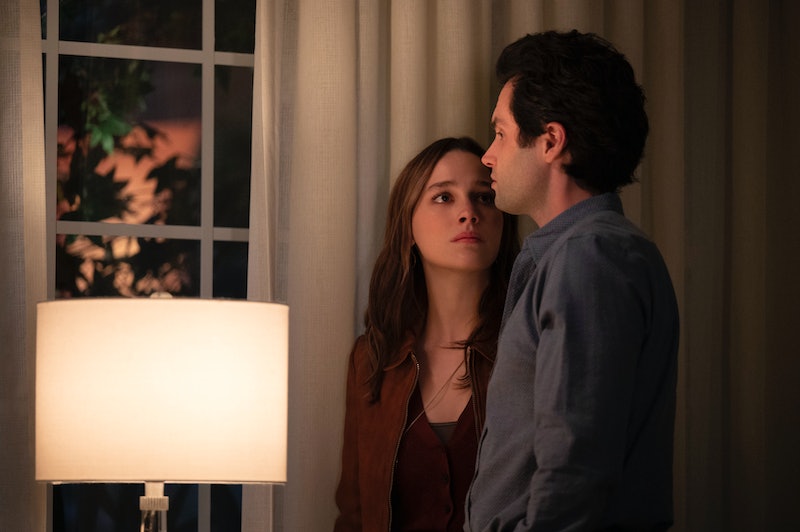 After a nearly two-year wait, You Season 3 finally debuted on Netflix Oct. 15 — and the latest installment delivered on all the creepy drama you’ve come to expect. And then some. As the ending of Season 2 teased, Joe and Love are living out their suburban dream this time around — but, uh, complications soon arise (as they inevitability do when these two are involved).

A baby and brand-new environment are a lot to deal with! Even if you’re not a couple of murderers. “It’s not as cut and dried when you get into marriage as when you just, like, meet a girl in New York City and hurl yourself at happily ever after,” showrunner Sera Gamble recently told Bustle in a breakdown of Season 3. “We knew that this would be a little bit more complicated [and that] there’d be more twists and turns in the relationship, because marriage is just more complicated. Parenthood is just more complicated.”

That’s definitely an understatement. If you’ve already sped through Season 3, you know that things get pretty tense — and if you haven’t, well, you probably could have guessed as much. Despite the dark, ever-suspenseful subject matter, fans still are having fun dissecting the latest batch of episodes on Twitter. Here are some of the best memes and tweets about You Season 3 so far. Slight spoilers for Season 3 ahead, but don’t worry, the season’s most dramatic twists and turns are spared.

Many of the best memes revolve around Joe and Love’s tense dynamic and newly discovered double standards — because look, moms and dads (even homicidal moms and dads) are treated differently by society.

One of Joe and Love’s new neighbors, a college student named Theo, proved to be one of Season 3’s most popular additions.

Several tweets highlighted poor baby Henry, who had the misfortune of being born to the world’s worst possible parents. Yikes.

Despite all the changes that go along with marriage and parenthood, many fans noted that You’s villainous protagonist was still very much himself during Season 3.

Humor, horror, suspense, heartbreak — You does it all at this point.

You Season 3 is streaming on Netflix now.