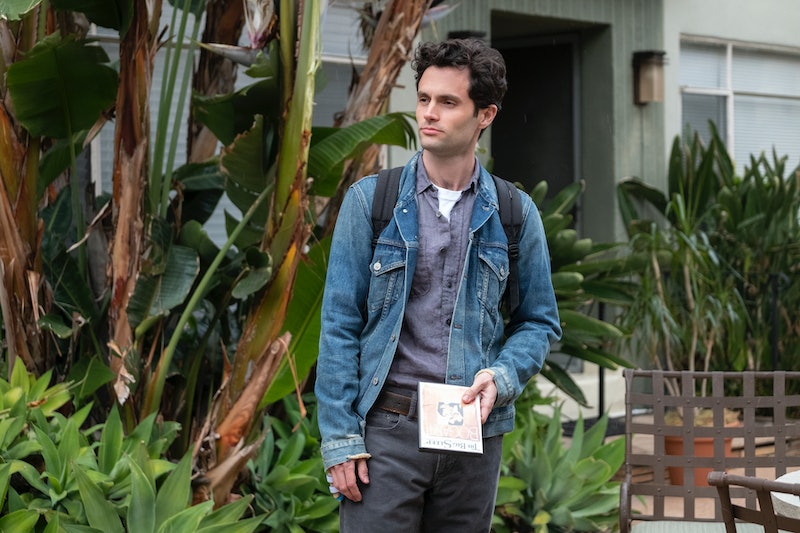 If you thought Season 1 of YOU was out of control, Season 2 of the thrilling series has proven even more deranged. After Season 1, the show moved from Lifetime to Netflix, and Joe Goldberg’s (Penn Badgley) obsession moved from Guinevere Beck (Elizabeth Lail) to Love Quinn (Victoria Pedretti).

Joe’s attempt to begin anew on the West Coast was promptly foiled upon meeting Love and a host of new characters, including Love’s brother, Forty (James Scully), and new neighbors Ellie (Jenna Ortega) and Delilah (Carmela Zumbado). Their problems soon became his, and Joe was left to figure out how to stifle his compulsion to kill in order to become a more empathetic person. Along with his ex-girlfriend, Candace (Ambyr Childers), Joe’s glass chamber also made a return.

With YOU coming back to Netflix for Season 3 on Friday, Oct. 15, now’s the time to find out how Joe’s stalker ways carried him through the second season. Here’s everything you need to remember:

Joe Embarked On A Fresh Start

At the start of Season 2, viewers are reminded of Joe’s past transgressions, particularly murdering Guinevere. He also came face-to-face with Candace, whom he left for dead — or so he thought. Haunted by her survival and Beck’s death, Joe headed to Los Angeles for a new life, complete with a new name: Will Bettelheim. The sunny city appeared to be an ironic backdrop for the character’s dark inclinations, as his stream-of-consciousness narration kicked into high gear after meeting his new neighbors, 15-year-old Ellie and her headstrong older sister, Delilah.

The former bookstore manager was instantly triggered upon meeting Love, a young widower, at the Quinn family-owned grocery store, Anavrin (“Nirvana spelled backward”), aka Joe’s new place of employment. There was an instant connection between the two, but Love had problems of her own; early in their relationship, she bluntly told Joe his presence complicated her life. Throughout the beginning of Season 2, it became clear Love fell hard for Joe and feared the possibility of their relationship falling apart. On the other hand, Joe had to focus on earning the acceptance of Love’s friends and her wayward brother, navigating the siblings’ dark secrets all while making sure Ellie stayed out of trouble.

Joe/Will had a lot of issues on his plate in Season 2. He was navigating his growing feelings for Love, life in Los Angeles, a new job, and the prospect of Candace outing him as a murderer. The Candace subplot that was further complicated by the reveal of the real Will Bettelheim (Robin Lord Taylor), whom Joe had locked away in his infamous glass cage.

Joe was uncertain about what to do with the real Will, but their relationship as captor and hostage soon turned into a friendship as Season 2 continued. Still, Will’s past caught up to both him and Joe when a “Russian mafia-chasing wanker” named Jasper came to collect $50,000 owed to him by Will. By the end of Season 2, Joe decided to free Will, who then headed to the Phillippines to unite with his fiancée, Gigi.

Joe became a father figure for Ellie. While she displayed more street smarts than Paco from Season 1, Joe made sure Ellie was protected from famous stand-up comedian Henderson, played by the controversial Chris D’Elia. Given her age and his skulking around their apartment complex, Ellie and Joe’s relationship was suspect from the moment they met. He was conflicted on whether to get involved in Ellie and Delilah’s lives, but his knowledge about Henderson raping Delilah when she was underage was proof enough to keep Ellie safe.

Joe murdered a few more people in Season 2, but some turned out to be accidental. Even though he didn’t kill Henderson, the performer died under Joe’s watch. After trying to flee from Joe, who attempted to make him confess to his crimes, Henderson broke his neck. Per usual, Joe managed to get away without taking any blame.

Joe was also at the scene when Officer Fincher (Danny Vasquez) shot Forty, who figured out Joe was Beck’s murderer. And after Jasper cut off the tip of Joe’s finger, Joe realized it was best to kill him before being murdered for money he didn’t actually owe. In addition, viewers found out via a flashback that Joe killed his father after years of enduring abuse at his hands. So yeah, it was a busy season for Joe.

Joe & Love Live Happily Ever After... Sort Of

It turned out that Love was just as sadistic as Joe. She killed Delilah, who also found herself in the glass cage, and she killed Candace after Delilah tried to comfort her. Love then confessed her feelings for Joe and told him she murdered Forty’s childhood au pair and Delilah. Joe was frustrated by the news, but Love revealed she was pregnant with his child, which obviously changed things.

After telling Ellie the Quinns were responsible for Delilah’s “disappearance,” Joe ended up sending her money in order to forge ahead with a new life. Ellie went to Florida, and by the end of Season 2, it was revealed Joe wanted to know her whereabouts in order to send more money.

As for Joe and Love, they headed to the suburbs to start a family. However, this is Joe we’re talking about, and their new neighbor immediately caught his eye, setting the stage for more mayhem in Season 3.