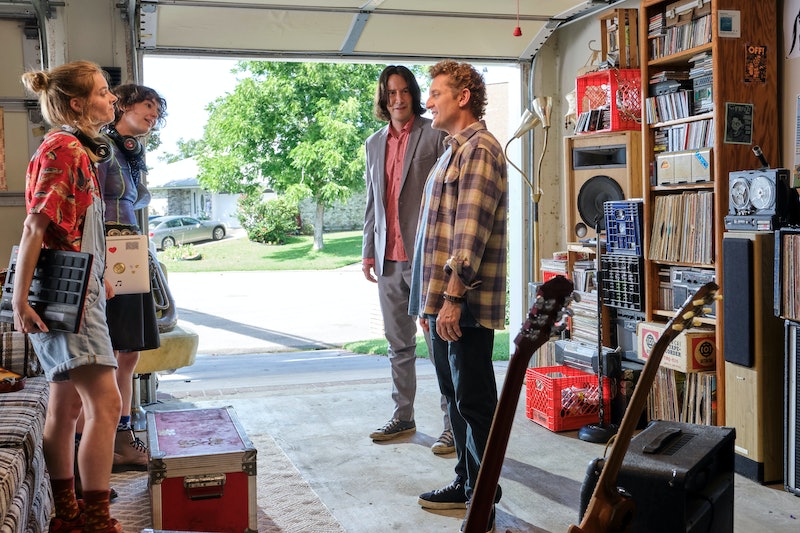 31 years ago, teenagers Bill S. Preston Esquire (Alex Winter) and Ted "Theodore" Logan (Keanu Reeves) were told they were going to save the world in Bill & Ted's Excellent Adventure. When a time traveler from the future named Rufus told them that their music would unite the universe, a lot of pressure landed on the young dudes' shoulders. And decades later in Bill & Ted Face the Music, the duo still hasn't written the song that's going to spark world peace and align the planets. But how Bill and Ted finally come to save the world isn't what you'd expect, with a female-centric twist that further solidifies their excellence.

Spoilers ahead for Bill & Ted Face the Music! When the film opens in 2020, Bill and Ted are a couple of aging has-beens whose most recent gig is performing at the wedding of their old step-mom Missy to Ted's little brother Deacon. "I'm tired, dude," a burnt-out Ted says to Bill. But just as they resign to call it quits, Rufus' daughter arrives from the future to tell them that they have less than two hours to write their unifying song, lest all of space and time unravel.

While Bill and Ted decide to travel forward in time to steal the song from themselves, their daughters cook up a smarter scheme. Thea and Billie (Samara Weaving and Brigette Lundy-Paine) head back in time to form the ultimate band to play their dads' song. But as it turns out, Rufus got the prophecy wrong. The song by "Preston and Logan" that unites the world isn't written by Bill and Ted, it's composed, arranged, and produced by their most excellent daughters.

Unlike their dads, Billie and Thea are true musical geniuses. While Bill and Ted didn't even know how to play their instruments at the end of Excellent Adventure, their daughters have been studying their entire lives. "Billie & Thea know everything there is to know about music and music history," Lundy-Paine says in the film's press notes. "They’ve dedicated their lives to it. So, in the same silly and light way that Bill and Ted know nothing, Billie and Thea know everything."

However, universe-uniting daughters weren't always the plan for the film. As franchise co-creator and writer Ed Solomon told CBR.com, Billie and Thea started out as sons, but the script just didn't click. "We wrote Will and Theo for several drafts, and it just never really worked, because they were either little carbon copies of their dads [which] just didn't feel funny or they were cool guys. They were kind of little hipster-y guys, and we just could not seem to find the comedy in that," he shared.

Plenty of recent sequels and remakes have gone the gender-swapping route in order to include more female characters and create a more diverse atmosphere. Just take the recent High Fidelity reboot, Ghostbusters, or Ocean's 8. And while there's always a risk that these gender flips can feel like pandering, that's not the case in Bill & Ted Face the Music. Not only because Weaving and Lundy-Paine's performances are spot-on homages to Winter and Reeves — but also because the chemistry between the four leads creates a touching father-daughter adventure, which there's a dearth of in Hollywood.

And in the end, bringing a feminist twist to the brotastic series is in keeping with the anti-toxic masculinity ethos of the franchise. Though depicted as typical surfer dudes, Bill and Ted have always been kind, respectful, and genuine. Their friendship is much more loving and nuanced than what we're used to seeing in other buddy comedies. Bill and Ted are never mean to others nor are they mean to each other. In the latest film, the pair even go as far as attending counseling together. So it shouldn't come as any surprise that Bill and Ted support their daughters' musical aptitude without gatekeeping. Or that there's absolutely zero ego involved when they realize that they're not the world-saving songwriters; it's their girls.

Bill and Ted have always been a couple of gently masculine feminist dudes, which makes the fact that their daughters save the world just a natural progression of themselves. And the film's message — that the world will survive when we all come together — is an exponential elaboration on Bill and Ted's simple message from the first movie: Be excellent to each other.