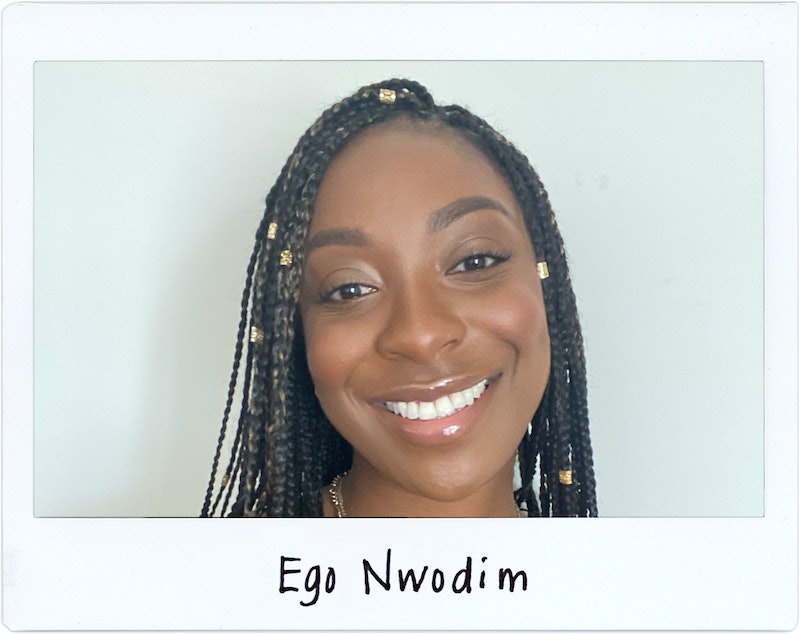 When celebrities (virtually) hang out with Bustle writers, we want to give them the chance to leave their mark. Literally. So we hand them a pen, a piece of paper, a few questions, and ask them to get creative. This time, The Broken Hearts Gallery star Ego Nwodim is leaving her mark in the Bustle Booth.

Ego Nwodim isn't afraid of change. A Baltimore native and USC graduate, Nwodim got a degree in biology before cutting her teeth in the Los Angeles improv comedy scene. Then in 2018 she said goodbye to science for good, joining Saturday Night Live for its 44th season and becoming the seventh Black female cast member in the show's 45-plus year history. Nwodim made waves her first year with her subtly subversive "thirsty cop” character and her spookily accurate impersonation of Red from Us. And when the coronavirus pandemic forced SNL to start filming from home, Nwodim’s take on a marker-wielding beauty blogger was a salve for audiences everywhere.

While acting solo in the middle of her living room wasn’t how Nwodim imagined her sophomore year at SNL going, the 32-year-old comedian says that the SNL At Home experience was a welcome return to form. "When you do your final audition for SNL, you're by yourself on stage for five minutes," Nwodim tells Bustle of her audition, which included delivering poetic burns as Maya Angelou. "It just took me back. I was like, 'I know how to do this.’”

Not only did Nwodim feel comfortable taping sketches from her apartment, she excelled at it. So much so that she was recently promoted to the coveted repertory player title for the show’s upcoming season. But before SNL returns in October, the comedian co-stars in the Selena Gomez-produced rom-com The Broken Hearts Gallery opposite Geraldine Viswanathan's Lucy, an "emotional hoarder" who creates a crowdsourced art gallery for fellow broken-hearted singles. Nwodim plays a stuck-up character nicknamed Harvard after her alma mater, who's a departure from her typical outspoken, progressive figures. "[Harvard] is so unlike me," Nwodim says with a laugh. "Uptight, pretty condescending, smarmy. It's a character I haven't played before."

Harvard began as a much smaller role, but after Nwodim joined the project, director Natalie Krinsky worked with her to make the role more three-dimensional. "I got to sit down with Natalie, and we fleshed it out and talked about who we thought Harvard is and how to reflect that in the movie," Nwodim explains. Often drawn to "indignant" and "disruptive" characters, Nwodim was eager to collaborate with Krinsky on crafting a new, surprising type to play. Together they landed on Harvard being someone "low key" who will "whisper a thing in your ear that will then leave you quietly spiraling" as Nwodim puts it.

But the quiet, menacing Harvard has real layers, which is what Nwodim always seeks in her characters: the opportunity to peel back a person’s facade and find the humor. "My assessment of condescending people is that they are sort of insecure, which isn't particularly funny [on the surface]," Nwodim says of Harvard. "But to highlight that they might be coming from a place where they're sitting on a high horse, but really terrified at any moment they're going to fall off, is really kind of funny, too."