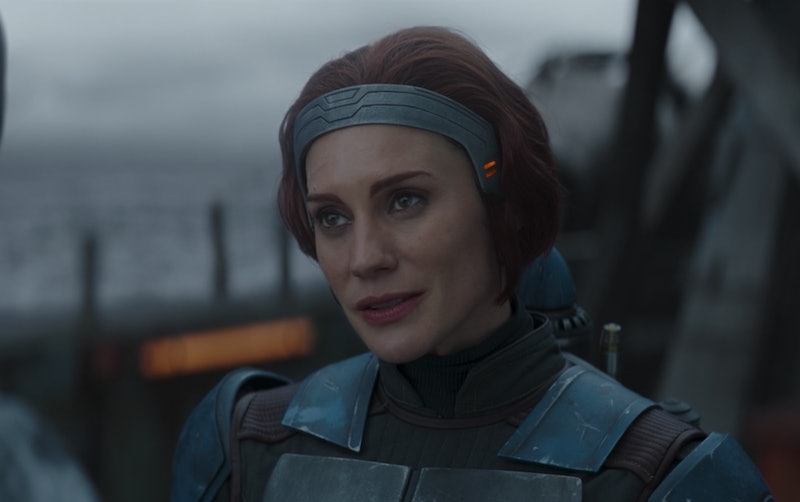 Spoilers ahead for The Mandalorian Season 2, Episode 3. The Mandalorian's Nov. 13 episode included the live-action debut of fan favorite character Bo-Katan Kryze, a Mandalorian from the animated series Star Wars: The Clone Wars and Star Wars Rebels. After dropping off Frog Lady with her husband, Mando is accosted by a group of squid-like Quarrens, who try to kill The Child and take Mando's armor. They're saved by Bo-Katan (Katee Sackhoff) and two other Mandalorians: Axe Woves (Simon Kassianides) and Koska Reeves (Mercedes Varnado, also known as WWE wrestler Sasha Banks). They reveal that Mando's upbringing was pretty backwards, and that they're on a mission to retake Mandalore, the Mandalorians' home planet.

At the end of the episode, Mando heads back to pick up Baby Yoda, who he left with the Frog Lady. But Bo-Katan lets him know the offer is still open for him to join them on their mission, and there are already several theories about how Bo-Katan could come back into play. Let's discuss.

Is Bo-Katan the Rightful Heir of Mandalore?

Entitled "The Heiress," the Nov. 13 episode focuses on Bo-Katan's efforts to essentially become Mandalore's leader — and she seems to have a pretty legitimate claim. For those unfamiliar with her backstory, Bo-Katan is a Mandalore native who became a lieutenant in Death Watch, a militant organization that opposed Mandalore's pacifism in the Clone Wars era. There's a lot more depth to the tale, but essentially Mandalorians weren't always armor-wearing bounty hunters, and Bo-Katan's desire to return to their warrior roots was considered extremist. After the Death Watch teamed up with Darth Maul, Bo-Katan shifted allegiances and fought alongside Obi-Wan Kenobi. At the end of The Clone Wars, she returned to Mandalore with Ahsoka Tano to try to retake the planet again. She then reappeared on Rebels and eventually became the rightful wielder of the Darksaber, a legendary weapon that Mandalorians believe is meant to belong to the true leader of Mandalore.

Some time between Rebels and The Mandalorian, Moff Gideon led the Great Purge and stole the Darksaber, so a popular theory is that we'll eventually see Bo-Katan battle Moff and reclaim the Darksaber. Fans seem split on who will actually rule Mandalore in the end, though. As one Reddit user pointed out, it's probably "a toss-up" between Din Djarin, Bo-Katan, and Boba Fett. Din is the main character, but Bo-Katan has the experience. And at this point, Boba Fett just needs something to do.

Who Are the Children of the Watch?

Bo-Katan reveals something pretty interesting about Mando's childhood: compared to the rest of Mandalorian culture, his was pretty repressive. "You're a Child of the Watch," she explains, describing the group as a "cult of religious zealots" who want to return to the ancient ways. Koska Reeves rolls her eyes when Mando says they're not supposed to take off their helmets, reinforcing that the "Children of the Watch" are viewed as a conservative fringe group in the wider Mandalorian culture. Per Inverse, there's a hint that "Children of the Watch" is an even more extreme offshoot from Death Watch, which was similarly obsessed with the past.

The idea of different Mandalorian sects will be unsurprising for those familiar with The Clone Wars and Rebels, which introduced groups like Bo-Katan's Nite Owls, the Imperial Mandalorians, and the Mandalorian Protectors. Regardless, this means that Mando has clearly been walled off from most of Mandalorian culture; if his story intersects with Bo-Katan's again, he might eventually learn to take off his mask more often.

At the end of the episode, Bo-Katan gives Mando the location of Ahsoka Tano, a significant character from both The Clone Wars and Rebels. Despite leaving the Jedi Order before she could become a full-fledged Jedi, Ahsoka did train under Anakin Skywalker, so in Mando's eyes she's basically a Jedi. Since Bo-Katan has clearly kept tabs on Ahsoka, it's possible we'll see the two women fighting side by side again. Maybe Season 2 ends with a siege of Mandalore?

When Sasha Banks was cast in the show, fans were hoping she would play the Mandalorian Sabine Wren from Rebels. That obviously didn't turn out to be the case, but is it possible Bo-Katan will still introduce Sabine? After all, the last time fans saw the character, she was traveling with Ahsoka to find the Force-sensitive Ezra Bridger from Rebels. Alternatively, maybe Sabine will be introduced as another member of Bo-Katan's Nite Owls, which used to be an all-women group.

Regardless of how things pans out, The Mandalorian Season 2 has more women warriors than ever, and we're not complaining.