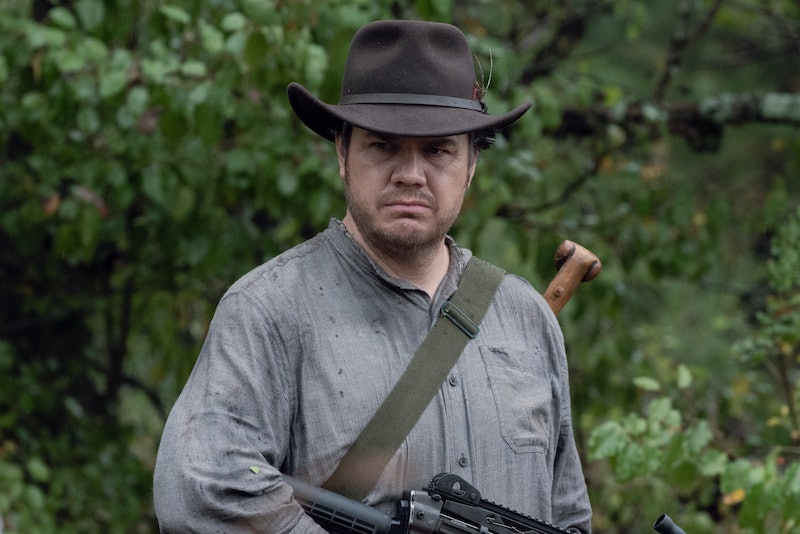 Spoilers ahead for The Walking Dead Season 10, Episode 16. At the end of The Walking Dead's mid-season 10 finale, Eugene, Ezekiel, Yumiko, and Princess find themselves surrounded by a mysterious new group. They have yet to be identified by name, but based on their advanced armor and weaponry, all signs point to them being members of the Commonwealth community from the comics. What we don't know is whether they'll be friend or foe. Warning: comic book spoilers ahead.

In the comics, Rick & co. come face-to-face with the Commonwealth shortly after a big battle with the Whisperers. Unlike Alpha, who preferred to live (and even look) like a walker, this new community is extremely advanced in regard to their technology, resources, and sheer volume of members. (The group is made up of over 50,000 people located in Ohio.)

On the one hand, it could be a huge benefit to Alexandria, Hilltop, Oceanside, and the Kingdom to become allies with such a massive community. Finding other people to join forces with is one of the reasons Eugene embarked on his journey in the first place. (Well, that and he wanted to make a romantic connection with his radio friend, Stephanie, who is most definitely tied to this group.) But the Commonwealth could also prove to be a massive threat.

Though things never escalate to a full-fledged war like with the Whisperers, Rick et al don't exactly have a smooth relationship with the Commonwealth in the comics. At one point, the son of the Commonwealth's governor assassinates Rick. This will obviously change in the show, given that Andrew Lincoln (Rick) exited The Walking Dead in Season 9, but another character could meet the same fate. Daryl and Carol would normally be at the top of the list, but their upcoming spinoff makes their deaths highly unlikely. This leaves Maggie as a possible target, or even Michonne if she ever returns, which doesn't seem improbable.

Whatever the case, the introduction of the Commonwealth sets up a stressful — and potentially dangerous — final season of The Walking Dead.

More like this
Everything To Know About 'Westworld' Season 5
By Sophia Moore
‘Squid Game’ Creator Hwang Dong-Hyuk Just Dropped A Major Season 2 Tease
By Brian Anthony Hernandez and Bustle Editors
'Stranger Things' Season 5 Will Echo Season 1 In A Key Way, The Duffer Brothers Confirm
By Kadin Burnett and Sophie McEvoy
What's New On Netflix: A Third '365 Days' Movie & Lili Reinhart’s New Film
By Arya Roshanian
Get Even More From Bustle — Sign Up For The Newsletter