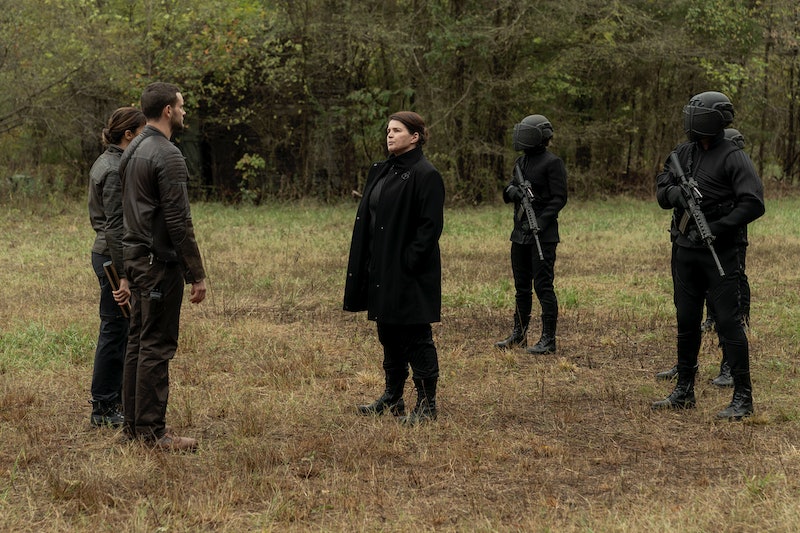 Many survivor communities have been explored on the Walking Dead franchise throughout the years, but one group that has remained a mystery is the Civic Republic Military, which, luckily, will be heavily featured in The Walking Dead: World Beyond. The new spinoff, set to premiere on Sunday, Oct. 4, promises to explore not only who these people are, but also what their intentions may be, particularly in regards to this new batch of characters.

Fans were first introduced to the CRM in Season 8, when their mysterious helicopter kept circling, and eventually came to Rick's rescue at the end of Season 9, carrying him away to an unknown location? That was them. As indicated through their interaction with Jadis from the Garbage People group on The Walking Dead, they categorize people as either "A" or "B," though it remains unclear what either of those things stand for. In World Beyond, they're set to take on a much bigger role.

"The story couldn't exist without them, I'm going to put it like that. They're very mysterious," World Beyond showrunner Matt Negrete told Entertainment Weekly during a recent interview when asked about the CRM's role. "There's this alliance that our characters and the area where they're from have with the Civic Republic Military." That said, don't expect all to be revealed at once. "It's a little tenuous, because this organization is so secret," he added.

And a central part of that narrative begins with the character of Elizabeth Kublek, played by Julia Ormond, whom Negrete states will serve as "the face of this organization" and play a key role in shedding light on the CRM's ultimate goal. "She's amazing," Negrete added during the same EW interview. "So I am looking forward to do ramping back up production for season 2 and working with her again."

But if you're hoping that all this might mean an appearance from Rick, don't hold your breath — though Ormond indicated during World Beyond's virtual Comic-Con panel that her character might know Rick's whereabouts. "If Elizabeth knows where Rick is, I'm not sure that she would tell you," she hinted, via Comicbook.com. "And if Elizabeth tells you, I'm not sure that you should believe her."

More like this
Nicola Coughlan Shared A Lady Whistledown Excerpt From ‘Bridgerton’ Season 3
By Grace Wehniainen, Alyssa Lapid and Sam Ramsden
Alicent's Green Dress In 'House Of The Dragon' May Be An Act Of War
By Kadin Burnett
'The Rings Of Power' Episode 4 May Put A Face To Season 1’s New Villain
By Kadin Burnett
The 'Bachelor In Paradise' Schedule Shifts To 4 Hours Every Week After The Season 8 Premiere
By Brad Witter
Get Even More From Bustle — Sign Up For The Newsletter