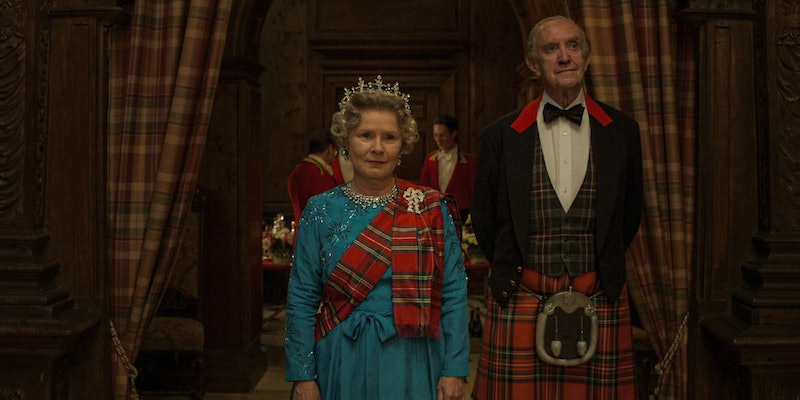 In the middle of The Crown Season 5’s retelling of the drama surrounding the royal family amid Prince Charles and Princess Diana’s tumultuous split, the series transports viewers back to 1917 and explores the Windsors’ connection to the Romanov family of Russia. If you aren’t up to speed on your Russian history or European royal family trees, it can be a bit confusing as to how the British royal family is connected to the Romanov family, but they are, in fact, related on both Prince Philip’s and Queen Elizabeth’s sides.

Per Vogue, The Crown’s depiction of what went down between the two families back in 1917 and in the early ’90s is mostly accurate. Prince Philip had to provide some of his DNA to confirm the identities of the exhumed bodies of Czar Nicholas II; his wife, Czarina Alexandra; and their four daughters and son, who were brutally executed by Bolshevik revolutionaries at Ipatiev House in 1917. In the show, there is a flashback to Queen Elizabeth II’s grandfather King George V being asked by an aide whether they want to give asylum to the Romanov family, who had been kidnapped during the revolution in Russia. Here is how it all really unfolded in history.

Did King George V Deny Asylum To The Romanov Family?

King George V and Czar Nicholas II were cousins and quite close, so when you hear the Romanovs exclaim that they think it’s “cousin George” coming to save them in Episode 6, it makes sense that the characters made that assumption. But the Windsors ultimately chose not to save the abdicated czar and his family for several reasons. The Washington Post reports that some historians believe it was due to tense international relations and alliances during World War I that made George V abandon his beloved cousin.

But as seen in the episode, other characters, such as Lady Penny Knatchbull, also think it’s possible that George V was less worried about strained relations with Germany and more concerned that his wife, Queen Mary, was jealous of the czarina. The Crown posits that the two grew up together in Germany as princesses and that Mary only became engaged to King George’s older brother after Alexandra had turned him down. When the king’s brother died, George married Mary. Knatchbull suggests that Mary always worried that Alexandra was prettier and would upstage her.

While this adds more melodrama to this particular episode of The Crown, it is likely untrue. Per The Post, Mary and Alexandra did not grow up with each other and were not known to be rivals. But other aspects of the episode are very accurate, such as Queen Elizabeth’s and Prince Philip’s ties to the Romanov family.

How Were Queen Elizabeth & Prince Philip Related To The Romanov Family?

Prince Philip was connected to the Russian family through his maternal side; Queen Victoria was Czarina Alexandra’s grandmother. Queen Elizabeth II is related to the Romanovs through her paternal side; as mentioned, her grandfather King George V was Czar Nicholas II’s cousin. Per The Express, Nicholas II’s mother, Marie, was the sister of King Edward VII’s wife, Queen Alexandra. And King Edward VII’s mother was Queen Victoria.

Because of Queen Victoria and her children’s marriages, many royal families are somehow connected to the Romanovs, earning her the nickname of “the grandmother of Europe,” according to Town & Country. But those family trees and their respective dramas need a whole Netflix series of their own.

More like this
'The Crown' Season 6 Has Suspended Filming "Out Of Respect" For The Queen's Death
By Bustle Staff
Ozzie’s Coming Out Scene With Kitty On 'That ’90s Show' Has Twitter Sobbing
By Brad Witter
Everything To Know About 'Cobra Kai' Season 6
By Brad Witter
Here’s Why Danny Masterson’s Hyde Isn’t In 'That '90s Show'
By Brad Witter
Get Even More From Bustle — Sign Up For The Newsletter
From hair trends to relationship advice, our daily newsletter has everything you need to sound like a person who’s on TikTok, even if you aren’t.