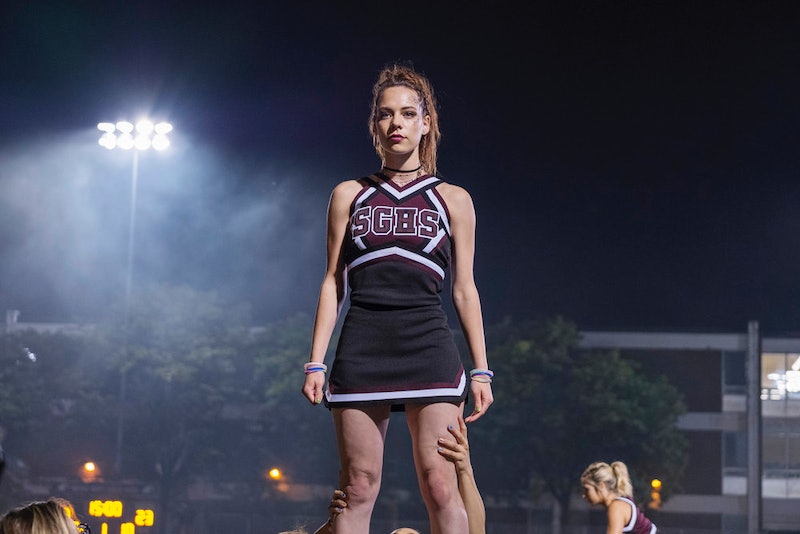 Nothing rings in the new year quite like a mesmerizing new murder mystery. USA's Dare Me, which is based on Megan Abbott's thriller novel of the same name, is an exploration of teen jealousy and power dynamics set in a quiet Midwestern town. Though the Dare Me cast is full of newcomers, they've got their hands full tackling Abbott's dark look at the teenage female psyche.

Dare Me is centered primarily on three characters: Beth, the domineering cheerleading captain, her loyal and doting sidekick Addy, and their strict new coach Collette. Though Beth and Addy have an established (if not unhealthy) friendship, Collette quickly throws their relationship into flux. As Collette usurps Beth's power over the cheer squad and pushes the girls to even more punishing heights, Addy becomes fixated on the young coach, much to Beth's ire.

As a result, Addy gets caught in a tug-of-war between the two alpha personalities, and it only worsens when a shocking death intertwines them all even further. With Beth and Addy connected to a possible murder, Dare Me explores just how menacing teen girls can be when pushed to their absolute limits.

Meet the cast below.

Guardiola previously starred in Netflix's The Get Down, but she's best known as a Cuban-Jamaican singer and songwriter. She's been featured on Absofacto’s Thousand Peaces EP, The Get Down soundtrack, and the official soundtrack for the Major Lazer documentary Give Me Future.

Guardiola plays Addy Hanlon, an ambitious student who dreams of using cheerleading to secure a college scholarship and leave her dead-end town — and Coach Collette seems to offer the guidance that Addy's been looking for.

Like Guardiola, Marlo Kelly is also a relative newcomer. She got her start on the show Home & Away, and more recently played the title character of Patricia Moore.

Kelly plays Beth Cassidy, the queen bee cheerleader who can be pretty cutthroat and cruel. Her best friend Addy is the only person she really cares about, so when Addy becomes enthralled by Collette, Beth becomes determined to win her back at all costs.

Willa Fitzgerald is most well known as the lead of the Scream series for three seasons, and is currently playing the young Claire on the latest on House of Cards.

Fitzgerald plays Colette French, a former star cheerleader turned successful cheer coach. She's young and charismatic, but behind all her poise she hides a messy and unhappy home life.

Heaps is a British actor, most recognizable for his starring role in the show Imposters, as well as appearances on And Then There Were None, Home Fires, and Death in Paradise.

Zach Roerig as Sergeant Will Mosley

Roerig is known for playing Casey Hughes on As the World Turns, Hunter Atwood on One Life to Live, and Matt Donovan on The Vampire Diaries. He recently had a recurring role in The Gifted and The Year of Spectacular Men.

Roerig plays Sarge Will Mosley in Dare Me, the head Marine recruiter stationed at the high school. Will is conventionally handsome and mysterious, but behind the facade he hides a complicated personal history.

These are all the key players in Dare Me, and once their worlds collide, nothing is ever the same for their small town again.

This article was originally published on Dec. 29, 2019