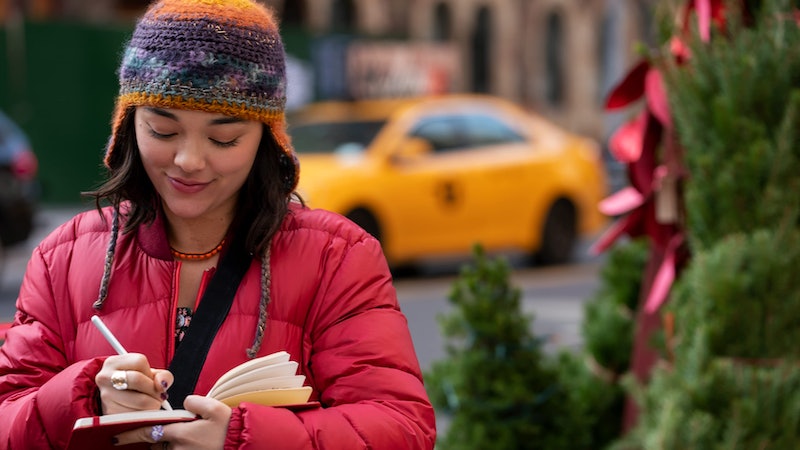 Dash & Lily's Book of Dares centers on the two titular, book-loving New Yorkers. Dash and Lily both frequent the famous Strand bookstore, but they couldn't be less alike. He's a broody guy who takes everything seriously and doesn't like people all that much, and she's a dog walker and amateur baker who lives and feels with her whole being.

As the novel opens, Dash and Lily have never met. What brings them together is the notebook Lily has stashed next to a copy of J.D. Salinger's Franny & Zooey. The book contains a dare and a request: for whoever completes her challenge to leave the notebook, and a challenge of their own, at a marked destination. Dash takes Lily up on her dare, leaving one of his own behind, and the two teens trade the notebook back and forth throughout the novel, traipsing around NYC in order to do so.

That setup is what makes Cohn and Levithan's novel — one of five the duo have written together — so unique. Dash & Lily's Book of Dares is a romance novel in which the protagonists fall in love before they ever actually meet. When they finally do, the two young lovers have built up idealized versions of each other in their own minds, and they quickly find that they might not know one another as well as they think.

It doesn't take long for Dash and Lily to accept each other as they are, but when a wild dare lands Lily on the cover of the New York Post — much to her parents' chagrin — things start to go downhill. To make up for the kerfuffle, Dash plans a romantic cooking date at a famous culinary studio. After making a variety of Rice Krispie treats together — including Oreo, banana crème, and plum-and-brie flavors — the two head out on their next adventure.

Lily has planned a huge surprise for Dash, one that brings their love story full-circle at the end of Cohn and Levithan's novel. After dancing together to a mariachi band playing on their subway car, the couple head to the Strand, where Lily has arranged for them to have the whole store to themselves. It's a dream-come-true... until the young lovers find themselves locked in a storage room inside the world-famous bookstore. It's there that they spend their first night together and that the book ends.

More like this
Netflix Shut Down 'Bridgerton' S3 Rumours About A “Very Dark” Storyline
By Bustle
'Wednesday' Star Emma Myers Thinks A Wenclair Storyline Is “Possible” In Season 2
By Alyssa Lapid
Armani Jackson Is Following In His Famous Actor Sister’s Footsteps
By Catharina Cheung
The 'Freeridge' Cast Shared Their Hopes For A Potential Season 2
By Grace Wehniainen
Get Even More From Bustle — Sign Up For The Newsletter
From hair trends to relationship advice, our daily newsletter has everything you need to sound like a person who’s on TikTok, even if you aren’t.