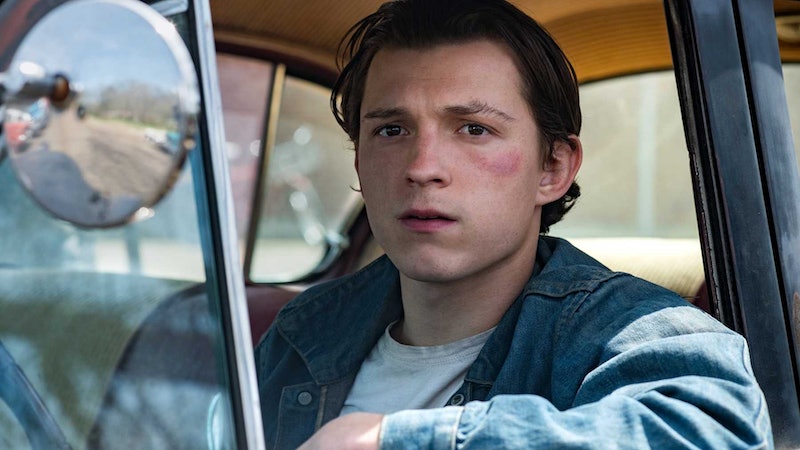 The Devil All the Time follows a cast of loosely connected characters across a couple of decades, bringing them together for a bloody climax that's as satisfying as it is disturbing. Tying it all together is Arvin: the son of a shell-shocked World War II veteran who took his own life after his strange, brutal acts of faith were unable to prevent his wife's death from cancer. The novel takes its name from one of Arvin's early observations about his father, who "seemed [to have] fought the Devil all the time." Following his parents' tragic deaths, Arvin goes to live with his paternal grandmother, Emma, and an orphaned girl named Lenora.

Emma wanted her son to marry Lenora's mother, Helen, but she wound up with a religious fanatic named Roy instead. Determined to prove that they've been blessed by God with supernatural powers, he and his cousin murder Helen, intending to bring her back to life through faith. When she remains dead, the two men leave town, afraid of being charged with murder. On their way, they drop Lenora on Emma's doorstep and never return to claim her.

Although Arvin and Lenora play at puppy love, they don't end up together. Instead, their small town's married minister, Pastor Teagardin, seduces 16-year-old Lenora. Pregnant and scared, Lenora kills herself when she learns that the preacher intends to leave her to her own devices, rather than helping to raise his child and protect her reputation. Using his father's service pistol, Arvin shoots Teagardin dead in retaliation for Lenora's tragic demise and goes on the lam, much the same as the girl's father once did.

Traveling separately on the road, Roy and Arvin run into a pair of married serial killers, Carl and Sandy Henderson, who pick up unlucky hitchhikers and seduce young men to pose as "models" before killing them. Roy encounters the Hendersons on his way home. He plans to atone for the death of his child's mother and reconnect with Lenora — unaware that she, too, is no longer living — but winds up becoming one of the couple's many victims.

When the Hendersons later encounter Arvin and attempt to murder him, however, he fights back. He shoots and kills them, but does not manage to leave the scene without attracting the attention of Sandy's brother, Sheriff Bodecker. The sheriff sets out to avenge his sister and brother-in-law's deaths, chasing Arvin down.

The two men meet up for a deadly showdown in a clearing, but, unbeknownst to Bodecker, Arvin has the upper hand. The area happens to be the same place where the young man's troubled father once conducted ritual sacrifices in an attempt to save his wife's life. Arvin kills Bodecker and sets out on the road once more, feeling some semblance of faith restored to him.