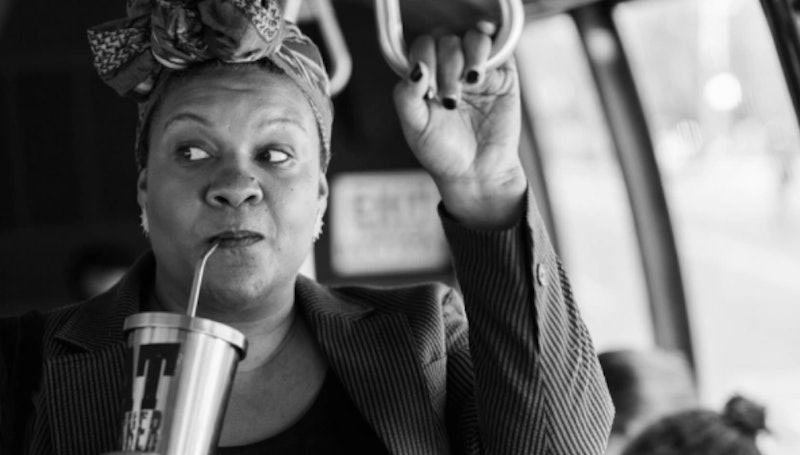 Radha Blank — whose directorial debut, The Forty-Year-Old Version, is out on Netflix now — has a lot in common with her film's protagonist. Blank and the fictionalized Radha are both playwrights and native New Yorkers. Each come from an artist mother and a jazz musician father. And both Radhas have dabbled in rap, creating music under the moniker RadhamMUSPrime. The Forty-Year-Old Version , which Blank starred in, wrote, directed, and produced, is her story through and through — and the process of making the film helped Blank find light in her darkest moments.

When we first meet the fictional Radha, she's trying to get her new play, Harlem Ave, produced by a theater bigwig. But the white, male producer would much rather see Radha pen a Harriet Tubman musical than explore the culture of her neighborhood on the stage. Radha is tired of struggling and she's also tired of all the rejection. “In my very early 20s I was writing plays and I really thought that by the time I reached 30, I would have had a breakthrough," tells Bustle of weaving in her own personal frustrations into the film. "Then by the time I was 30 I was writing ensemble plays, doing a little TV writing. And by the time I [turned] 40? [the breakthrough] didn't happen."

In The Forty-Year-Old Version, Radha also reckons with turning 40 and still not having "made it." Which coalesces in a mid-life crisis of sorts — one that inspires Radha to take up rapping while also giving into her white producer's more commercialized vision for Harlem Ave. Without giving too much away, Radha discovers that she's prolific at rapping, but that she should've stuck to her guns about revising Harlem Ave.

But the pressure to conform to a gatekeeper's vision for your work is something Blank identifies with. "[They were] looking for [stories] about a certain kind of Black life, one that assuages the guilt and the fears of white patrons,” says Blank of the feedback her plays were often met with. So she decided to shake up her approach. "I realized I was relying on people outside of me too much, on the gatekeepers flagging me, so I had to turn to the DIY model."

Which led Blank to create The Forty-Year-Old Version. In its first iteration the project was a web series, but when Blank’s mother passed away she rewrote it as a feature film. The movie weaves together Blank's grief, her struggle to make it as an artist on her own terms, and the societal pressures that come with aging. Yet above all else, The Forty-Year-Old Version is a love letter to Blank's family. “[The film] made me have an appreciation for my parents and everything that they went through [as struggling artists],” says Blank. “I don't know that I would be the same person without that. The film is celebrating them.”