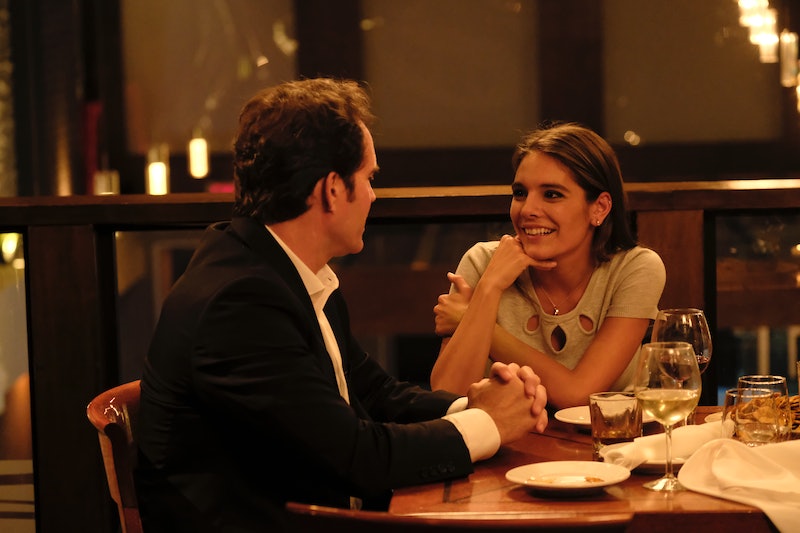 A lot of Lifetime movies are soap operatic tales involving lies, murder, and mystery that feel way too unbelievable to be real. But the network’s 2018 drama The Girl in the Bathtub tells a disturbing true story. In May 2013, a young woman named Julia Law was found dead in a bathtub days before her 27th birthday. According to The Philadelphia Inquirer, the Philadelphia paralegal was discovered by a maintenance worker in the home of her boss and rumored lover A. Charles Peruto, Jr, a defense attorney at her firm. There were no drugs, alcohol, or any signs of foul play at the scene, but Law was reportedly frothing at the mouth.

Peruto was not at home when Law’s body was found. He dedicated a Facebook message to Law on her birthday, calling her his “soulmate.” However, Law’s stepfather, Joe Casella, confirmed to the Inquirer that Law had gone through a difficult break up with someone who was not Peruto shortly before her death. "As a significant long-term and loving relationship was ending these last few weeks, Julia was at a very vulnerable and emotional time in her young life,” Law’s family said in a statement. “Despite this, she had expressed all week, including Friday night, that she was looking forward to spending the holiday weekend with us, where we were all planning to celebrate her 27th birthday."

The family asked Peruto and other employees from Law’s firm not to attend her funeral. "We just don't want them there," Casella told the Inquirer, declining to elaborate.

A February 2014 CBS News update revealed that, after an investigation, law enforcement officials found no evidence of criminal activity in Law’s case. Her autopsy confirmed that her blood alcohol level was more than .4% at the time of her death, which is more than the legal limit of .08. It was ruled as an accidental death, clearing Peruto of any suspicion. Still, Philadelphia Magazine reported that Peruto was angry with District Attorney Seth Williams about the lengthy investigation and called Williams a “power-tripping bum” on Facebook for allegedly putting a cloud of suspicion over him and threatening his reputation.

The Girl in the Bathtub dramatizes Law’s story. Described as a dark, psychological thriller, it stars Australian actor Caitlin Stasey as Law and The Lost Boys' Jason Patric as Peruto. It portrays Law as a woman struggling with substance misuse and Peruto as a prominent lawyer who she’d recently begun dating. “But it is soon revealed her boss was just one of three lovers Julia had—raising questions about whether any of them may have had a motive to kill her. So the question remains – who killed Julia Law?” the description reads.

Peruto told The Philadelphia Inquirer in 2018 that he had no knowledge of the movie and had not been consulted about it. “This is the first I’m hearing about this,” he said. “I don’t know how I, or anyone, can be portrayed accurately, since no one in my firm, where [Law] worked daily, myself included, was so much as asked a question.” Lifetime did not respond to his statement, and Law’s family hasn’t commented on it either.

More like this
Gerard Butler Insisted On Adding This Pivotal Scene To 'Plane'
By Catharina Cheung
Jemima Khan Used Her Own Life As Inspo For 'What’s Love Got To Do With It?'
By Darshita Goyal
What Is Mary J. Blige’s Net Worth? The 9-Time Grammy Winner Is Doing “Just Fine”
By Hugh McIntyre
Pamela Anderson’s Dating & Marriage History Could Be Its Own TV Series
By Jake Viswanath
Get Even More From Bustle — Sign Up For The Newsletter
From hair trends to relationship advice, our daily newsletter has everything you need to sound like a person who’s on TikTok, even if you aren’t.

This article was originally published on Oct. 7, 2018