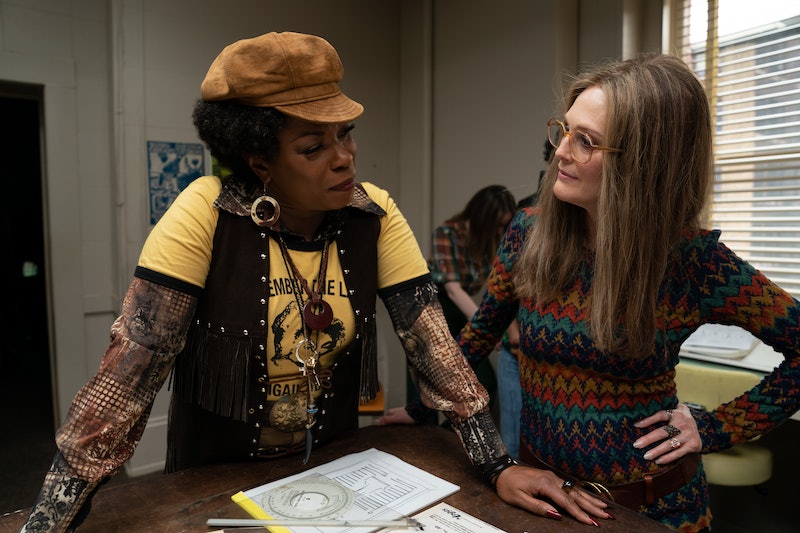 Given the upcoming presidential election (and the overall dumpster fire that is 2020), there may be no better time for a biopic of Gloria Steinem to remind us of the fight for women's rights, and what it takes to really start a movement. In the new trailer for Amazon's The Glorias, Julianne Moore transform into Steinem to tell that very story. And she's a dead ringer for the iconic feminist, sunglasses and all.

Based on Steinem's 2015 book My Life On the Road, The Glorias sees Oscar winners Moore and Alicia Vikander play Steinem at four different stages of her life, tracking her journey from groundbreaking journalist to feminist activist — but in a non-linear way. Rather than telling her story chronologically, the film intertwines "the Glorias" as they travel together in a Greyhound bus — literally — through Steinem's most notable achievements. The film will touch on her travels through India as a young woman to founding Ms. Magazine in New York, and finally, her role in the 1960s Women's Movement and the historic National Women's Conference in 1977.

Alongside Moore and Vikander, The Glorias features a star-studded cast playing feminist figures worthy of their own biopics, including Janelle Monaé as African-American feminist icon Dorothy Pitman Hughes, Lorraine Toussaint as civil rights advocate Flo Kennedy, and Bette Midler as fellow Women's Movement leader Bella Azbug. The film was directed by Julie Taymor, who also adapted Steinem's book alongside writer Sarah Ruhl, meaning that there's just as much female empowerment offscreen as there is on camera.

Moore opened up about playing Steinem in an October 2019 interview, and revealed that she was able to actually pick Steinem's brain in preparation for the role. "Truly the best part about doing that movie was getting to spend some time with Gloria Steinem," she told Harper's Bazaar UK. "She is amazing – so smart, incredibly thoughtful, very open, unbelievably kind, able to speak with anybody. Gloria is a true activist." Taymor had similar experiences with the activist, tellling TheWrap that Steinem's message is more pertinent now than ever. "She’s the leader who listens," the director said. “She’s a leader because she pushes up other people. She helps them rise, and god knows we need that now."

The Glorias will be available for for purchase on digital and streaming on Amazon Prime Video starting Sept. 30.

More like this
Sandra Bullock, Girlboss Extraordinaire
By Matt Harkins & Viviana Olen
'The Wilds' Has A Major Cliffhanger To Resolve In A Potential Season 3
By Brad Witter
Watch The Dramatic First Trailer For Netflix's Jennifer Lopez Documentary
By Alyssa Lapid
'Doctor Who’s New Star Is Already Huge On TikTok
By Maxine Harrison
Get Even More From Bustle — Sign Up For The Newsletter