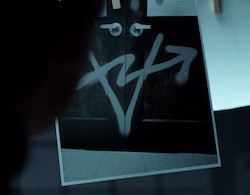 Spoilers for 13 Reasons Why Season 4, Episodes 1-8. The start of Episode 8 of the new 13 Reasons Why season is unlike anything the show has ever done. Clay seems to be having a sort of dystopian video game-esque dream where he and his friends are battling robot invaders in a burning wasteland. It's this scene that finally clues viewers in on what the graffiti tag symbol actually means in 13 Reasons Why.

The tag is the letter V with a jagged arrow through it, and it first appears in Episode 2, spray painted under the the graffiti at the high school that reads, "Monty was framed." When Clay sees the symbol, it seems like he recognizes it, but can't quite place it. He sees it again in Episode 4 when he's thrown into a rock crevice by the football team on the class camping trip. The symbol is carved into the rocks. And in Episode 7, when he's released from the hospital, he sees the image on the ceiling above his bed.

We learn in Episode 8 that Clay, in what might have been a dissociative state (but isn't formally diagnosed), spray painted the graffiti. (In the same scene we also discover that Clay set fire to a cop car, and has carried out a series of other misdeeds while in a similar state.) Which leads up to believe that he also painted the symbol on the school doors, and mostly likely carved it into the rocks on the camping trip. And the symbol is also widely present in his strange dystopian dream. It appears on the patch Clay wears on his clothing, and it can be seen on the map that Clay and his friends are looking at.

One possible theory about the meaning of the graffiti tag is that it symbolizes the name of the world in Clay's dream. He says they're in the Andromeda Galaxy and the V with the arrow through it could possibly be an upside down A for Andromeda.

Clay says that he's been having this dystopian dream for months. But perhaps it's less of a dream than a twisted, waking reality. In the "dream," he and his friends are the only ones who can save mankind and they run around with weapons in a fiery wasteland. Maybe whenever he has that "dream," that's when he carries out actions that he doesn't remember. Like setting fire to the cop car, terrorizing his friends on the camping trip, or spray painting the high school.

Clay becomes aware of the actions he's committed after seeing footage of himself burning down the cop car. The video seems to have triggered something in his brain, and suddenly he remembers all of the incidents he previously didn't realize he was a part of. And since many of those events come before or after he sees the V symbol, one could theorize that they're connected in the sense that Clay thinks he's dreaming and running around saving people from a dystopian future, but in reality he's causing real life chaos. It's possible his subconscious brain could have turned it into a game because he has suffered too much trauma to face things head on.

Although now it seems like he is ready to face what he's done and why he did it. In a meeting with his therapist, Clay is shocked to find out that he'd set the fire in the principal's car, since he has no memory of it. His therapist suggests that perhaps Clay hasn't just been keeping secrets for people and from people, but that his own brain has been keeping secrets from him. "Are you ready to let those secrets out?" his therapist asks. "Yes," Clay responds. It's time for him to look at his dystopian nightmares in the daylight and figure out what's really been going on when he thinks he's been sleeping.