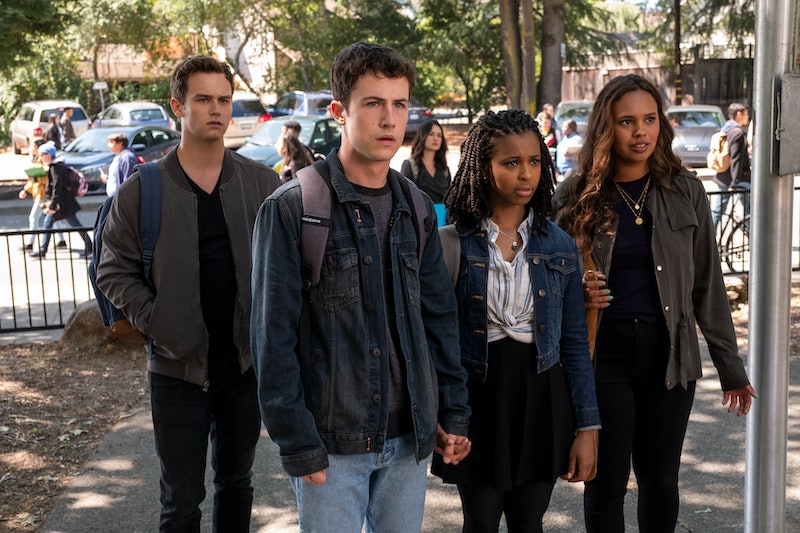 Buckle up, Liberty High: 13 Reasons Why is heading into its fourth and final season. The deaths of several students are still casting a pall over the school, and Season 4 focuses on yet another murder. It's a lot to take in, so lets recap 13 Reasons Why Season 3 before the finale drops on Friday.

Season 3 picked up eight months after the Spring Fling, where Tyler's attempted school shooting was stopped by Clay, Tony, Justin, and Jess. The season jumped between two timelines, and was centered around the mystery of who killed Bryce Walker.

Grace Saif's Ani was the most important newcomer of Season 3. The daughter of the Walker's live-in nurse, Ani narrated the season via a police interrogation about Bryce's death. Ani formed an uncomfortable (and unnecessary) sexual relationship with Bryce early in the season, but began dating Clay by its end. While she at first attempted to solve Bryce's murder, she ultimately helped Clay and the others cover it up.

Jessica founded Hands Off Our Bodies

After being the victim of sexual assault in Season 1, Jessica found her voice in Season 3. She became school president, and created Hands Off Our Bodies (HO), an activist group for sexual assault survivors. She also became comfortable in her own skin again, exploring both self pleasure and casual (and occasionally kinky) sex with Justin.

Justin seemed to be on the up-and-up at the start: he began living with Clay, working at Monet's, playing football, and seeing Jessica. The return of his mom's boyfriend Seth threw a wrench in all that. Justin began selling and misusing substances, and Bryce had to bail him out of jail. In the finale, Justin and Ani came up with the plan to pin Bryce's murder on Monty, and Justin told the Jensens he needed rehab.

Jessica broke up with Alex to get back with Justin in Season 3, so Alex threw himself headlong into weightlifting. He began using steroids from Bryce, and the two grew close across the season. Alex cut Bryce off after a break-in went awry, however; they ended up trashing a stranger's house instead of Bryce's dad's and terrified a kid in the process.

After Tony's family was suddenly taken by ICE, he began working at his family's auto shop to raise money for a lawyer. Bryce overpaid for Tony's mustang to help him, and only later did Tony learn that it was Bryce's parents who alerted ICE. Understandably furious, Tony gave Hannah's tapes to Bryce so he could finally reckon with what he did. In the finale, Tony was spotted giving money to a cartel member for his family.

Tyler healed after his assault

Tyler was sexually assaulted by Monty in Season 2, which is implied to be the impetus for his plan to bring guns to the school. Tony hid all of Tyler's guns, and in Season 3 Tyler slowly healed through counseling sessions and boxing with Tony. This journey culminated in Tyler standing up during the HO rally to share with the whole school how he was assaulted. The season ended with everyone bonding over Tyler's photo exhibit at Monet's.

At the start of Season 3, Zach became captain of the football team and grew close Bryce's ex Chloe, even accompanying her when she had her abortion. Their relationship infuriated Bryce, so he purposefully tackled Zach in a way that would destroy his knee. Unable to play professionally, Zach brutally beat Bryce on the football field, kicking off a massive fight.

Alex killed Bryce and his dad covered it up

Season 3 attempted to redeem Bryce, but he ended up being as volatile as ever. After Zach beat him, Bryce attempted to give an apology tape to Jessica and Alex at the piers. But when Bryce threatened to hurt Zach once he recovered, Alex shoved the severely injured Bryce into the river. Alex and Jessica watched him drown, and Deputy Standall helped the kids cover up the murder.

Bryce's murder was pinned on Monty

Monty was finally arrested for assaulting Tyler in Season 3. But before he went to jail, he had sex with Winston, and even admitted to his father that he was gay. At the end of the season, we find out that Monty was killed by the other inmates for being a rapist. Clay and his friends subsequently pinned Bryce's death on Monty, and Deputy Standall agreed to help after Ani told him, "Let the dead bury the dead."

Winston knows the truth, though, and in the final moments he confronted Ani about framing Monty, who was with him at the time of Bryce's murder. Can Alex actually get away with murder in Season 4, or will Winston's alibi ensure that all hopes of college, and a future, crumble for Clay and his friends?