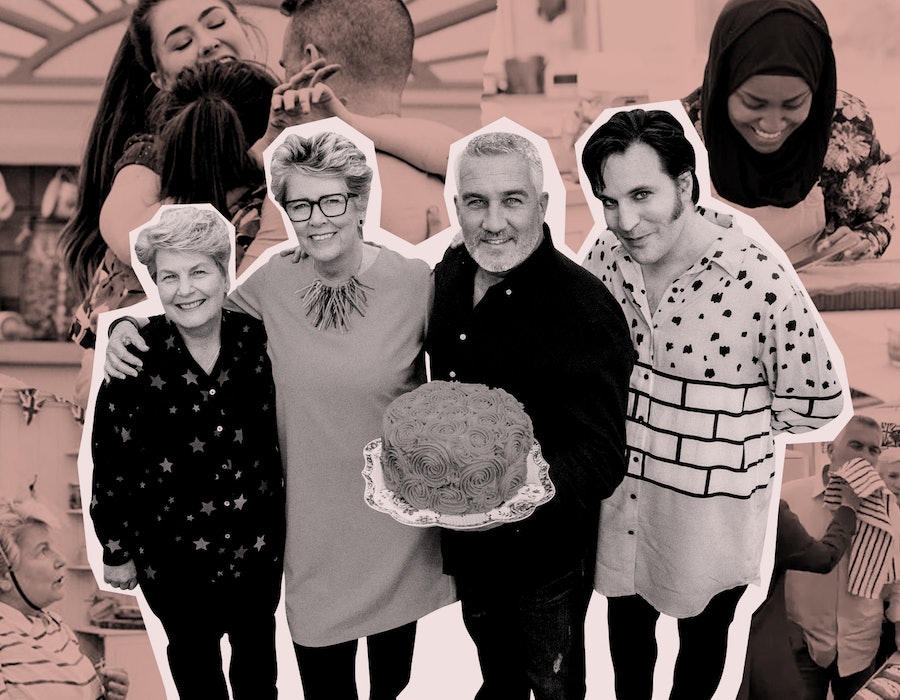 Early on in quarantine, I was obsessed with Bon Appétit test cooking videos to the point at which I was beginning to wonder if it was a diagnosable condition. I mean it. I would watch videos — often the same videos, ones I had already seen before — every single day, over and over again, the background soundtrack to whatever else I was doing that day.

Overnight, the soothing effect of those videos evaporated when the kitchen imploded amid reports of racial insensitivity. For me, its place has been filled by The Great British Baking Show, the last salvation of gentle, food-related content with which I desperately attempt to self-soothe. Like the Test Kitchen, there's an atmosphere of cheerfulness, in which the disasters of the world at large are only alluded to in the broadest possible sense and the greatest extent to which tragedy can occur is an overworked dough that hasn’t properly risen.

Much has been written about the show since it began streaming on Netflix (over in the UK, it’s The Great British Bake-Off but a copyright issue in the States necessitated a minor name change), but in case you’re uninitiated, here are the basics: Every year, 12 amateur bakers from all across Great Britain are invited into a tent to compete in three weekly challenges around a certain theme. The weakest member of the herd is eliminated, and then the next week the remaining bakers compete again, until only one is crowned as a champion.

Even as it gets a little cheesier and self-indulgent, it’s worth remembering that the show has always been artificial as the distilled essence of bubblegum.

There is no prize money. None of the challenges have secret gimmicks. No time limit is ever adhered to so strictly that a baker can’t get something “on the plate,” as might happen in an American show, when heart-pounding music would rise to a crescendo as a countdown ticks closer to zero on the screen. No, in the land of GBBO, the time limits are given, usually in pun-form, by the two hosts, and the strongest adjective I could apply to the musical score in the background is “bracing.”

But in recent years, there’s been a murmur of discontent among the Baking Show fandom. The show, they whisper, has changed. Of course, there have been some tangible changes: The show moved from the BBC to Channel 4, which prompted the exit of beloved judge Mary Berry and the hosts Mel and Sue. But the more insidious changes are the subtler ones.

As the show has grown in popularity, it’s taken on a sort of mythologizing self-reverence. The show itself now knows that the Paul Hollywood Handshake is a big deal, and they’ll milk its importance, the same way they milk the cutesy way all of the bakers seem to fan their cakes with baking sheets for no reason. The show knows its own memes. Challenges have become more Instagram-friendly, less “traditional British grandma classics.” The stakes are higher, more visible. It’s become a victim of its own popularity, people scoff. Like whatever your last boyfriend’s favorite rock band was, the show was better — more authentic — before it was cool.

It’s a representation of a British culture that exists only in Paddington films and the "Keep Calm and Carry On" poster-industrial complex.

With all due respect, I politely disagree. Even as it gets a little cheesier and self-indulgent, it’s worth remembering that the show has always been artificial as the distilled essence of bubblegum (don’t put that in your cakes, Paul never likes it!). It’s a representation of a British culture that exists only in Paddington films and the "Keep Calm and Carry On" poster-industrial complex. Intellectually, I know that not everyone in England is constantly baking lemon cakes while drinking tea and politely assisting whoever happens to be next to them at any given moment, but as an American who’s spent the past four years wrestling with the black pit where I once believed my nation’s central decency might have existed, it’s fun to pretend that just across the Atlantic ocean, a different world exists. A better world.

I watch old seasons on repeat, cycling through them in a mere matter of days, half-listening to Paul’s critiques in a Northern accent while I fold laundry or clean dishes. I live alone, so quarantine for me has been long stretches of silence where I let Noel Fielding and Sandi Toksvig keep me company (for the record, I miss Mary, Mel, and Sue, but I don’t mind the new Guard — Prue’s chunky necklaces are fun, and especially now that Matt Lucas is here, Noel seems to be having a blast). It’s not unlike leaving the radio on for a dog.

It’s nice to think that we’re all simultaneously becoming deeply invested in what flavors go well together in a Battenberg cake.

The show increasing in popularity has never bothered me — in fact, it reduces the explanations I used to give to strangers to justify my obsession. Now, more often than not, they’re obsessed as well. And that lends The Great British Baking Show a new comforting power, a unifying monoculture effect. We’re all isolated in our own homes, but it’s nice to think that we’re all simultaneously becoming deeply invested in what flavors go well together in a Battenberg cake.

I know that The Great British Baking Show isn’t perfect — it’s a television show. Better writers than I could probably draw a line from the Jolly Old England it mythologizes to the fearmongering movement that led the UK to Brexit.

But sometimes a cake is just a cake. For me, now, at this moment, I need to hold on to a simple show with a simple structure, where no one cries over spilled batter and kind people get to show off a thing they do just for the love of baking.

More like this
Twitter Can’t Get Over The One Thing Missing From 'GBBO's Tense Finale
By Darshita Goyal
Twitter Is Still Reeling Over Tyler’s 'Strictly' Exit
By Sophie McEvoy
This 'Strictly' Star Is Rumoured To Be The New 'Big Brother' Host
By El Hunt, Maxine Harrison and Sam Ramsden
A Major 'Call The Midwife' Character’s Future Is In Question
By El Hunt
Get Even More From Bustle — Sign Up For The Newsletter