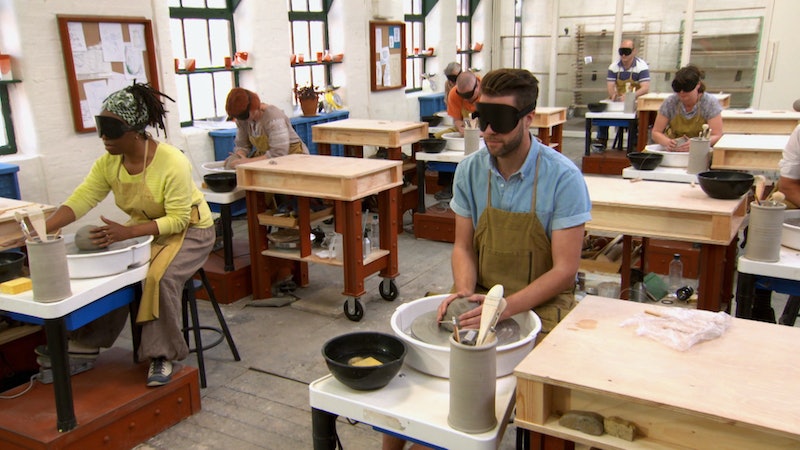 The format will be soothingly familiar by this point: each week there are challenges both technical and creative that decide which potter will have to put down his clay and head home. Over the six-episode season, contestants race to make as many egg cups as humanly possible, orchestrate elaborate clay chandeliers, and throw traditional porcelain tea sets. And if six episodes doesn't sound like enough, you're in luck: HBO is planning to release 3 seasons of the show simultaneously. Below, all the contestants featured in Season 1.

James is a veterinarian by day and a budding ceramicist in his downtime, specializing in adorably bespoke pet food bowls. Since starring on Throw Down, he's also become a presenter, hosting a documentary series about pets on children's television and a pet lovers podcast called Vet Together.

Jane is a teacher from Wales who has been making pottery for over 20 years. Her work is inspired by the sea near the farm she grew up on.

Besides being a potter, Jim is a painter and decorator who fronts his own band, Slim Jim and the Wild Cards. He founded his studio James Erin Ceramics in 1989, specializing over the years in garden and tableware.

Only 23 years old when the series was filmed, Matthew is the youngest contestant on Throw Down. But he also has an advantage: both of his parents are pottery teachers. Now, according to his studio website, he's a lecturer in 3D Design at Gray's School of Art in Aberdeen.

Nigel, who worked in construction for 30 years, took up pottery when his wife suggested he needed a new hobby. He enjoyed the courses so much he decided to pursue a degree in ceramics at Straffordshire University. Now he has his own studio in Derbyshire.

Originally from Mumbai, Rekha is a conceptual artist with Fine Arts degrees from Central St. Martins College of Art and Design in London, according to her website. Besides pottery, her practice includes painting and sculptural design and her work has been exhibited throughout Europe.

Sally-Jo is an interior designer with her own firm, Bond & Hicks, in Hampshire. The mother of two only started throwing pottery five years before filming the series, when she wanted to hand-make a wedding present for a friend.

Sandra has been potting for 20 years and sells her creations through her own shop, Sazi Studio. She works as a community arts project manager and credits ceramics with helping her to recapture her creative spirit after becoming a mother for the second time.

Following a career that spanned the army and business, Tom took up pottery, which he initially learned as a boy, according to his website. He also runs The Clay Loft, a communal art-making space he set up in Gloucestershire.

Joanna started making pottery out of necessity: she wanted a planter for a small bonsai tree and couldn't believe what stores were charging. That was over 15 years ago. On her website, she says she finds the process of throwing clay almost spiritual: "It transports me both back in time to the mud pies of my childhood, and also into a meditative state where marvelous creations are possible and time has no meaning."