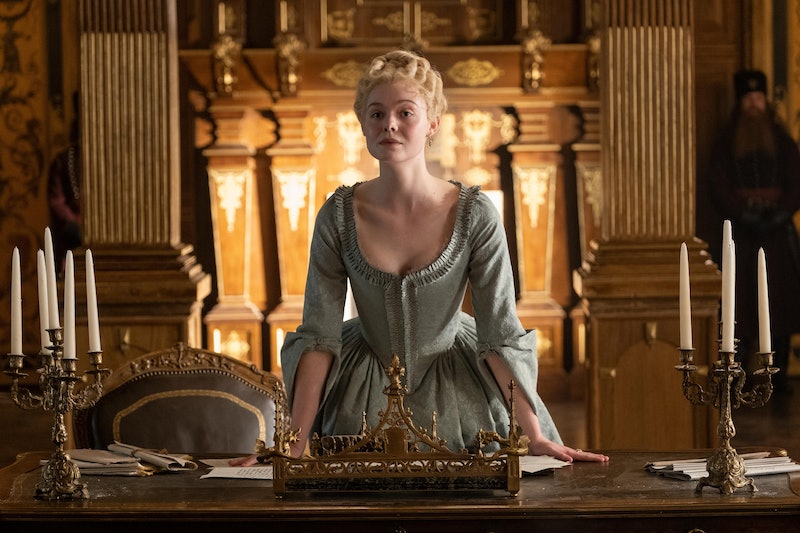 With Elle Fanning's Catherine the Great only just coming into power — plus that finale cliffhanger left to explore — it came as little surprise that Hulu renewed The Great for Season 2 in July. There could be plenty more on the way, too: executive producer Marian Macgowan previously told Decider that they initially pitched six seasons, and she believes there's "sufficient material to take us through until [Catherine] is an old woman." After all, the Hulu period piece's first season ended with Catherine turning 20.

Prior to the renewal news, Fanning, who stars alongside Nicholas Hoult (as Peter III), told Entertainment Weekly that although she doesn't know exactly when Season 2 would pick up, she believed they would be about the same age. Fanning added that creator Tony McNamara "has more stories" beyond those told in the first season, and she's looking forward to seeing what happens following the finale's events.

"I did not think it was going to end this way either," she explained to EW. "Tony was writing the scripts while we were filming, as we were going along, and so I think none of us really knew the endpoint. I definitely thought it was going to be something different. So I was surprised by that. When we got the last script it was like, "Oh! Okay."

Following her 2021 Golden Globe nomination for the role, Fanning, while hesitant to share Season 2 details, did note Catherine's "real soft spot" for Peter, which will be explored more in the future. "Their relationship gets way more twisted," she teased. "So we have a lot working together." Perhaps it has something to do with this baby bump in a new press photo?

Although Hulu has yet to announce any firm details, Hoult will almost certainly reprise his role, as Variety reported in May that he was exiting his role as the villain in the seventh Mission: Impossible movie because the film's pandemic-related filming delay caused an overlap with the The Great's Season 2 production. In terms of storyline, the door seems open for all of the original cast members to return, save for perhaps Sebastian De Souza, who played Catherine's lover Leo in Season 1.

The only bad news is that there may be a bit of a wait for Season 2, as the first installment premiered more than a year after its initial series order. With COVID-19 production delays still plaguing Hollywood, don't expect to see The Great's second season before 2022.

More like this
'Ramy' Will “Probably” End With Season 4, According To Ramy Youssef
By Brad Witter
'Reservation Dogs' Season 3 May Finally Mend Bear & Willie Jack’s Relationship
By Gretchen Smail
Khloé Kardashian Debuts Baby Boy On 'The Kardashians' Season 2 Premiere
By Jake Viswanath
UK Viewers Will Have To Wait To Watch The Handmaid’s Tale S5
By Maxine Harrison
Get Even More From Bustle — Sign Up For The Newsletter