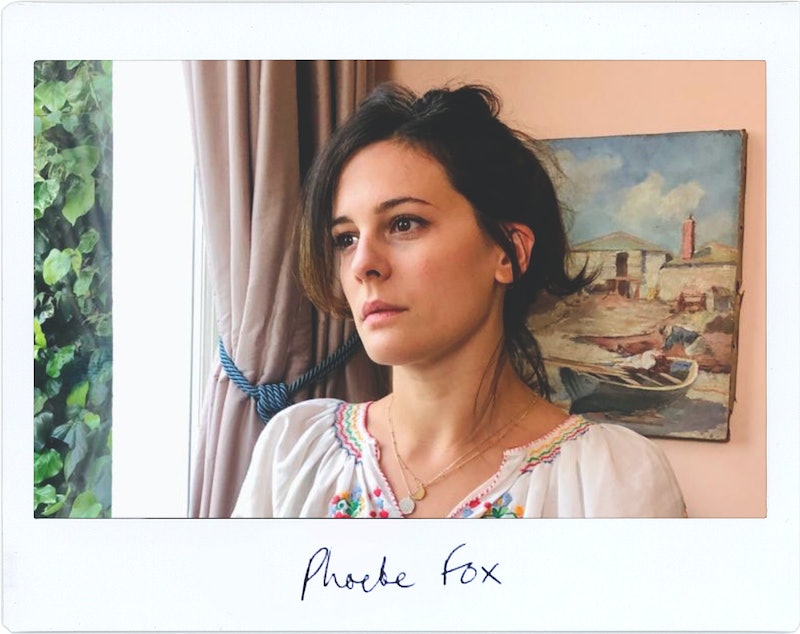 When celebrities hang out with Bustle writers, we want to give them the chance to leave their mark. Literally. So we hand them a pen, a piece of paper, a few questions, and ask them to get creative. This time, The Great star Phoebe Fox is leaving her mark in the Bustle Booth.

Phoebe Fox was painting her sister’s portrait when she got the call from The Royal Academy of Dramatic Art: she got in. She’d spent three years auditioning for theatre schools and hadn’t gotten a single acceptance, so when she heard the news, she dropped her paintbrush in the middle of the call. The portrait remains unfinished. “Every time I look at it, I get that feeling of joy,” Fox says. “It is so important to hold onto that when you are feeling the depression of being rejected.” The portrait hangs in her living room today.

Growing up in a house of jobbing actors, Fox had no delusions as to what pursuing this career would look like. She was willing to take the periods of unemployment and the constant rejection for the chance to act. She pursued it with fervor, her engrossing presence on stage captivating audiences in London and New York. She appeared in the Tony Award-winning revival of A View from The Bridge and played a sexually frustrated Olivia in Twelfth Night at the National Theatre. Now, she’s taken on the role of Marial, a hotheaded serf and friend to Catherine the Great (Elle Fanning) on Hulu’s The Great.

Fox has been in a steady stream of period pieces, but The Favourite writer Tony McNamara’s clever take on Catherine’s ascent to power felt different. “The Great mixes all the cool bits [of a period drama] and then you also get to swear, which may be the best of both worlds,” she says. “It felt very naughty.” Marial is Catherine’s closest confidant as they plot a coup against the idiotic Peter III (Nicholas Hoult). Like many of Peter’s subjects, Marial has felt Peter’s cruelty firsthand. After being stripped of her title and forced into serfdom, she’s built up a tough exterior and rarely lets her guard down.

“I admire her ability to get angry because I lack the ability to express my anger, like a lot of women.” Fox says. “Rage and anger are not emotions people associate with women because we were not allowed to show it for so long. Marial just lets it out.”

Get to know more about Fox in her Bustle Booth questionnaire below.

More like this
'That '90s Show' Star Callie Haverda Got Advice From Mila Kunis & Ashton Kutcher
By Brad Witter
Wait, Is Barney Stinson Related To Sophie On 'HIMYF'?
By Gretchen Smail
Everything To Know About 'Only Murders In The Building' Season 3
By Gretchen Smail and Kadin Burnett
'The Crown' Season 6 Has Suspended Filming "Out Of Respect" For The Queen's Death
By Bustle Staff
Get Even More From Bustle — Sign Up For The Newsletter
From hair trends to relationship advice, our daily newsletter has everything you need to sound like a person who’s on TikTok, even if you aren’t.