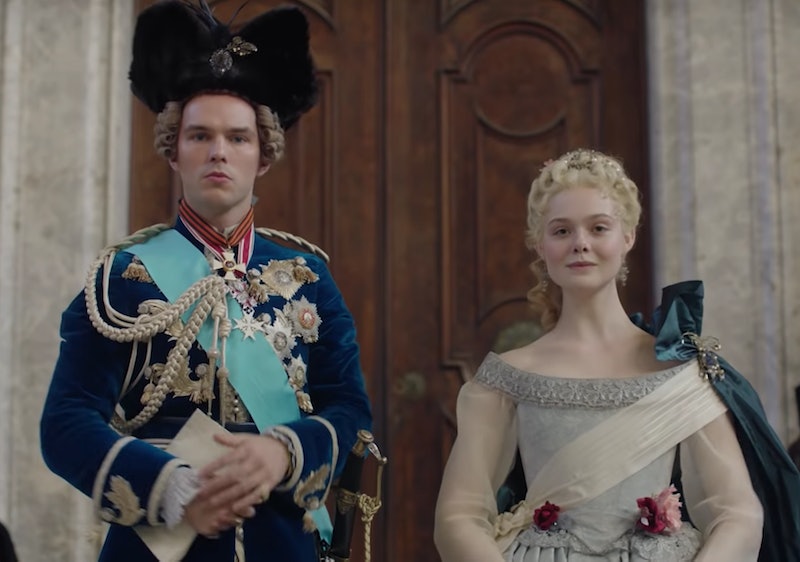 In a comedic cross between The Favourite and Dickinson, the trailer for Elle Fanning’s The Great offers a satirical look at the life of Catherine the Great and her rise as the longest-reigning female ruler in Russian history. Written and created by The Favourite co-writer Tony McNamara, The Great is an upcoming Hulu miniseries that follows Catherine the Great (Fanning) as she arrives in Russia to wed the buffoonish Emperor Peter of Russia (Nicholas Hoult). The satirical period drama, “based on historical facts — sort of,” per the trailer, follows 18th century Russia as Catherine orchestrates a coup to overthrow her husband.

In the teaser trailer unveiled on March 23, Catherine the Great contends with an infantile husband who throws fruit at his servants for fun, tosses a dog bound to a parachute out the window, and considers himself “the most loved ruler in all of Russian history” as dead bodies hang from the ceiling. “I’m a prisoner here married to an idiot,” Catherine the Great says to Peter in the teaser. He then responds with a grammatically incorrect touché (“toosh”) that prompts his wife to reply, “Do you mean touché?”

The clip concludes with a voiceover from a woman who says to Catherine, “There are many unhappy who are looking for a leader. I hope I am looking at her.”

In an interview with Deadline last February, McNamara explained what drew him to the Russian ruler. “[Catherine] immediately struck me as amazing, because she started women’s education and she kept the enlightenment alive at the time,” McNamara said. “I thought, well there’s a character. She was a young woman who went to a foreign country and ended up running it. She married an idiot and ended up taking over this country.” He added, “I thought she was an amazing woman and… became very interested in writing about it.”

Fanning echoed similar sentiments. On Instagram on Monday, Fanning shared a teaser and praised her character as an “idealistic young woman” in a “patriarchal world.” She wrote, in part, “Playing Catherine was the greatest gift. I learned so much from this idealistic young woman who slowly finds her power in a patriarchal world.” Fanning added, “It’s time to rule Russia in a different way!”

The Great premieres on Hulu on May 15.