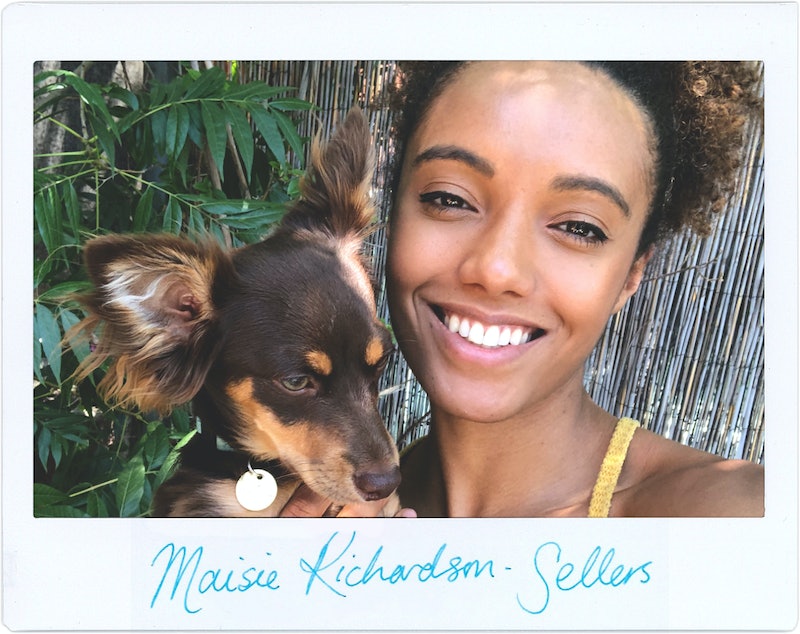 When celebrities (virtually) hang out with Bustle writers, we want to give them the chance to leave their mark. Literally. So we hand them a pen, a piece of paper, a few questions, and ask them to get creative. This time, The Kissing Booth 2 star Maisie Richardson-Sellers is leaving her mark in the Bustle Booth.

There’s a scene in The Kissing Booth 2 that hits on a trope so prevalent in pop culture it feels like we already know what will happen. The core couple, Elle (Joey King) and Noah (Jacob Elordi) are out for dinner during her trip to visit him at Harvard when Noah’s new best friend Chloe (Maisie Richardson-Sellers) breezes in. She’s as gorgeous as she is charming, and Noah’s seemingly transfixed by her jetsetting stories. Meanwhile, Elle’s in full-on crisis mode, concerned that Chloe has everything she doesn’t — maybe even her boyfriend. Chloe has all the trappings of the would-be “other woman,” yet in Richardson-Sellers’s hands, she’s anything but. Yes, “[Chloe] can captivate everyone and entertain anyone,” the 28-year-old Richardson-Sellers tells Bustle. But she’s also genuine — a trait these kinds of characters are rarely afforded in rom-coms where their sole purpose is to break up or threaten the central couple.

This layered take on the type of female character we’re conditioned to hate is a fitting role for Richardson-Sellers, who’s all about disrupting Hollywood norms. Her production company Barefaced Productions is dedicated to amplifying underrepresented voices in TV and film — something that, as a Black queer woman, is an especially personal pursuit. And simply depicting diversity on screen isn’t enough. “When you do see storylines that are ‘diverse’ but are written by someone who is not of that lived experience, they can be problematic and lead to two-dimensional and watered-down depictions of those intense, interesting, and nuanced existences,” Richardson-Sellers says.

Barefaced has been an outlet for the former Legends of Tomorrow star to expand her skill set from acting into directing and producing. Her first effort was Sunday’s Child, a short film she co-wrote and directed about a young woman who discovers a Queer and Trans People of Color artist community. “Our crew was 80% female and 90% people of color and it just created such fantastic energy,” Richardson-Sellers says. “Sets are very white male spaces. But for me, it’s important to have the people behind the camera reflect the people in front of the camera. It has to be diverse at every single level.”

Richardson-Sellers has been using her extra time in quarantine to hone her craft, taking the Warner Brothers Directors course and sinking hours into developing new material under the Barefaced imprint. She’s working tirelessly to give underrepresented voices — including her own — a seat at the table. “[I] have a responsibility to make sure that is happening,” she says. It's not good enough to not just be fighting [for it].”