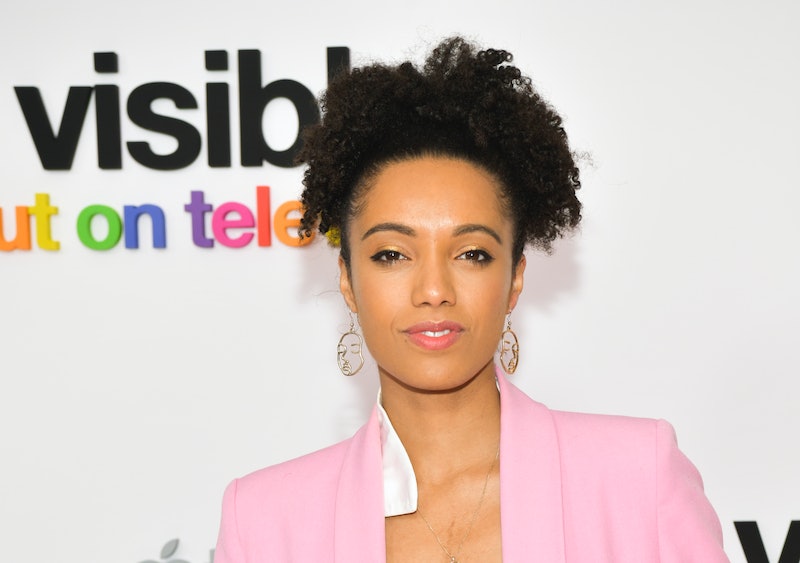 With Netflix's The Kissing Booth breaking all kinds of records for the streaming platform, it was inevitable there'd be a follow up to the teen rom-com. And sure enough, The Kissing Booth 2 drops on July 24, with Elle (Joey King), Lee (Joel Courtney), and Noah (Jacob Elordi) facing new hurdles to their respective romances. Like the fact that Elle thinks there's something going on between Noah and his new best friend at Harvard, Chloe. So who plays Chloe in The Kissing Booth 2? Maisie Richardson-Sellers stars as the charming Ivy League co-ed.

Richardson-Sellers is probably best known for her recurring role on the CW's Legends of Tomorrow, where she played the time-traveling superhero Vixen, and later Charlie, a shapeshifter who got locked in Vixen's body. Dual roles seem to be a specialty for the English actress, as she also played the powerful young witch Eva Sinclair and vampire Rebekah Mikaelson in The Originals.

Richardson-Sellers has a lot going on offscreen as well. In 2017, she co-created Shethority with several of her CW co-stars. Described as an online global collective, Shethority aims to create a positive space for women of all kinds "to discuss and conquer the unique challenges of the female experience in today’s world through sharing journeys, challenges, triumphs, and inspirations." Identifying as queer, Richardson-Sellers was named one of E!'s 2020 New Faces Of Pride, and she took the opportunity to demand widespread change in her industry. "One thing the current gatekeepers are failing to realize is that simply adding more POC and LGBTQAI+ characters as subplots and quirky sidekicks to bolster the storylines of white protagonists isn't enough. When those who are creating and writing and directing the stories are not diverse, we end up time and time again with watered down, two dimensional and often stereotypical representation that misses out on so much of the nuance and magic of diverse experiences," she told E!

But Richardson-Sellers isn't just talking the talk. She recently launched her own production company, Barefaced Productions, to help promote diversity in the industry. She's also directed a few projects herself, including the short film Sunday's Child and a music video in collaboration with her partner, singer CLAY. DivaMag called the "Project 5" video "an ode to queer love." Richardson-Sellers also told the magazine they reached out to their LGBTQAI+ friends, "and asked them to send us clips of them proudly existing on a day to day basis, or engaging with the track. I then cut these together with footage we filmed in South Africa. The whole video is shot on phones in order to have a low-fi, home video style feel to it, creating a familiar, nostalgic intimacy that everyone can relate to."

It's clear there's a lot to come from Richardson-Sellers — in front of the camera and behind it — post-The Kissing Booth 2.

More like this
Here’s Everything Coming To & Leaving Netflix In February
By Jake Viswanath
Pamela Anderson Is Still A Hopeless Romantic
By Ilana Kaplan
'Knock At The Cabin' May Start Streaming Sooner Than You’d Think
By Jake Viswanath
Stephen Graham & Steve McQueen Are Working On A Wartime Drama
By Darshita Goyal
Get Even More From Bustle — Sign Up For The Newsletter
From hair trends to relationship advice, our daily newsletter has everything you need to sound like a person who’s on TikTok, even if you aren’t.