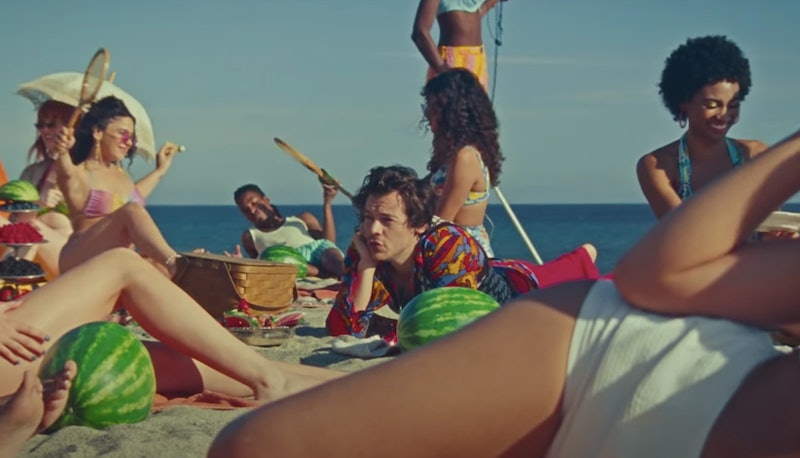 Whether you’ve been a hardcore Harry Styles stan since day one or you're just here for his new album, the "Watermelon Sugar" video he dropped yesterday (May 18) is the chic, colourful, and feel good fantasy we all need right now. And now we're all desperate to know where “Watermelon Sugar” was shot, as it looks like the perfect post-lockdown vacay spot.

“Watermelon Sugar” opens with Styles walking to sit at a table on a stretch of sand about to tuck into what looks like an epic breakfast. We've since learnt that the beach in question was in fact located in Malibu – but that's not where the story ends.

Pretty much as soon as the video dropped, dedicated Directioners recognised the setting from One Directions' first music video “What Makes You Beautiful”, which dropped in 2011. Is this a nod back to his boyband days? A touching tribute? Or maybe a hint about a possible reunion? Fans want answers.

While the location is a massive throwback to the start of Styles’ career, it’s not the only easter egg in the video. In the opening shot, the table Styles sits at is covered with an orange tablecloth. Orange has seemed to follow Harry throughout his work – most recently in his “Adore You” video. Here, we see Styles sail away from the fictional island of Eroda on a ship with orange sails.

More interestingly, however, is that the camper van seen in the “What Makes You Beautiful” video is also orange. Some super fans are convinced that, because Louis was the one driving the van in the boy's first video, the nod here may be evidence of the #Larry secret relationship that they are all rooting for.

In between all the frantic easter egg analysing you can do in the "Watermelon Sugar" video, you will no doubt stop to appreciate the fashion. He might be a singer but Styles has also become a sartorial sensation, a title he proves worthy of in this video.

The star rocked a floral scarf and striped shirt combo straight off the Gucci fall 2020 runway and a range of delightful nail polish colours that I'm lusting after. The fashion featured in this video is a summer mood and I'm about to buy all the dupes I can lay my hands on.

He also donned the blue circular glasses that he wore in 2019 on the cover of Rolling Stone. Many believe these glasses – along with the two other pairs he wore in the video – act as a tribute to Elton John's iconic eyewear lewks in “I’m Still Standing.”

In fact, the whole video has an "I’m Still Standing" vibe, which is unsurprising as we all know Styles is a big Elton fan.