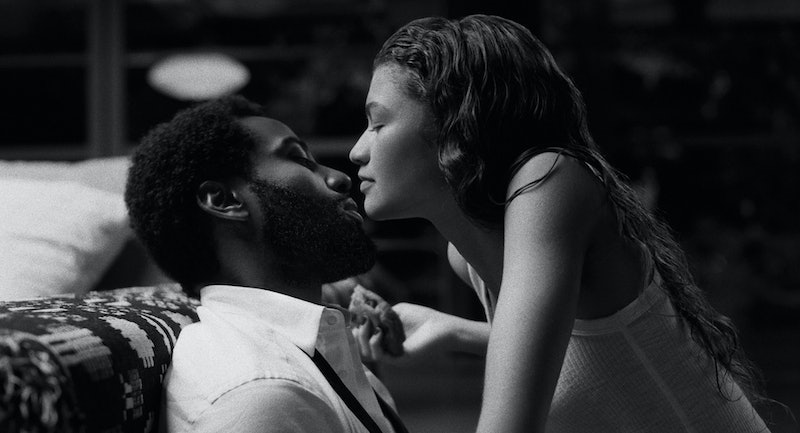 The new Netflix film Malcolm & Marie stars Zendaya and John David Washington as a couple whose relationship status is in flux. The sexy black and white romance takes place entirely on a single evening during which the highs and lows of Malcolm and Marie's relationship are laid bare and both characters dig their deepest to both hurt one another and express their love. Knowing that Malcolm & Marie is a relationship rollercoaster, it might not be surprising that the end is left a little ambiguous. Do Malcolm and Marie make it? Do they stick together? Or do they break up? The end is a little unclear. Spoilers ahead for Malcolm & Marie.

The premise of Malcolm & Marie, directed by Euphoria creator Sam Levinson, follows a budding filmmaker Malcolm (Washington) who has just premiered his breakthrough movie. The story of his film is based on the life of his girlfriend and muse, the seemingly younger Marie (Zendaya). The two have just returned home from the premiere party when Marie starts making Malcolm some boxed mac and cheese. But something's off. Marie is mad, she's more than mad. And that's when it hits Malcolm: he forgot to thank her in his speech.

The rest of the film revolves around not only this key mistake on Malcolm's behalf, but on Marie's history as an addict, the roots of their relationship, and what kind of artist they both want to be. Marie accuses Malcolm of using her personal background for his film, while Malcolm asserts that he based it on a number of people and Marie just wants to play the victim. Marie, who used to be an actor herself, is frustrated that Malcolm didn't have her play the part, while Malcolm is frustrated with Marie for giving up her career.

By the end of the night, Malcolm finally utters a reluctant thank you, after which Marie expresses a tired "you're welcome," as the two fall into bed without consummating any of the near-intimate moments they've had throughout the evening. But the final scene at the end of the movie makes it so their relationship status isn't so clear. Malcolm wakes up to find Marie out of bed and wanders around the house looking for her. As a viewer, we think she's left him, but eventually, Malcolm spots Marie outside, looking out into the distance. He joins her there for a beat at which point the movie ends.

Malcolm & Marie presents a relationship possibly on the verge of breaking down, or one that has to jump its biggest hurdle in order to survive. But there's no definitive answer as to whether Malcolm and Marie stay together in the end or not; that interpretation is left up to the viewer.