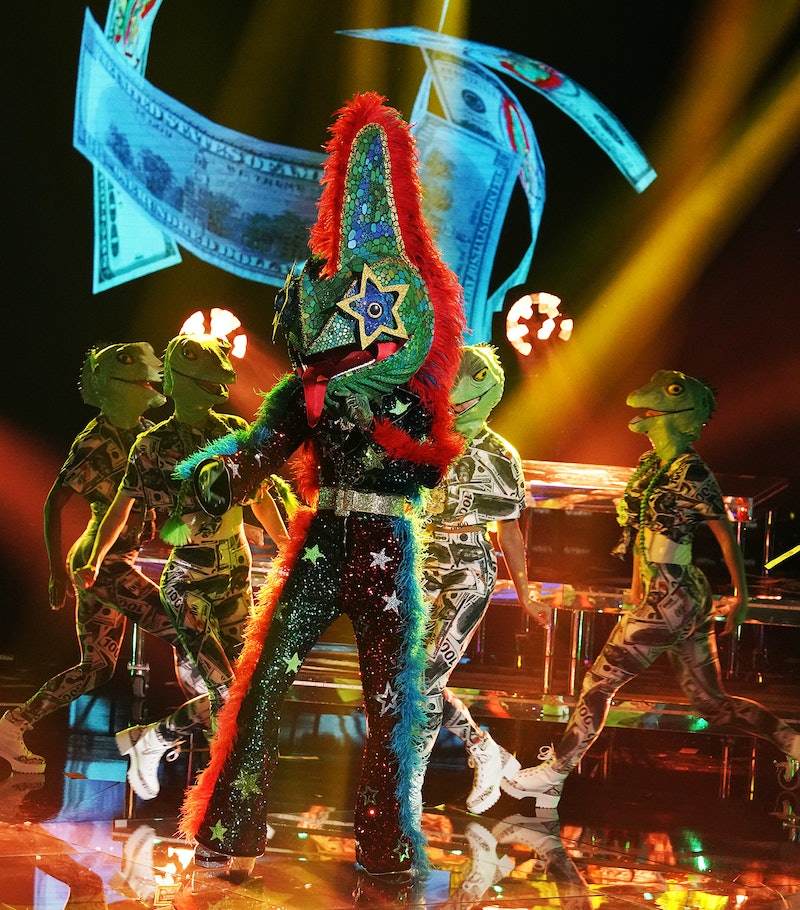 Michael Becker/FOX
By Gretchen Smail
May 6, 2021

With just six singers left in The Masked Singer Season 5, fans are narrowing in on who each of the competitors could be. One singer who’s continually impressed the judges is the disco jumpsuit-wearing Chameleon, who rapped renditions of Nelly’s “Ride with Me” and 50 Cent’s “21 Questions.” Judges guessed athletes like Dwight Howard and Dwyane Wade based on his height, but fans are pretty set on the theory that the Chameleon is Wiz Khalifa. “Could it be more obvious that this is Wiz?” one fan wrote on YouTube. “Dude has the sickest flow and such a characteristic voice.”

One top of Chameleon having Khalifa’s recognizable voice, it’s hard to deny how much the clues line up with the famous rapper. In the Week 2 clue package, Chameleon rode in on a motorcycle with a “CAMOFLAG” license plate and a pair of dice with “2” and “3” on them. He said he “puts the tech in technicolor,” and praised his dad for inspiring him. He also read a book labeled “I.T.”

Khalifa’s parents served in the military, and Khalifa told Ebony that his dad “told me to always give 100 percent in anything that I do; that’s why I’m standing here today as an artist.” Khalifa featured on Mike Will Made-It’s track “23,” and is known for being a major tech geek, especially for VR technology.

In the Week 4 clue package, Chameleon’s visual clues included a blue and gold graduation cap and a taxi with peaches on it. “When I was young, someone inseparable from me was constantly attacked for who she was. I helped lift her up,” Chameleon said as he showed a painting of a rainbow Chameleon. “But then tragedy struck, and she was taken from me. Now, I honor her memory by fighting for those who don’t feel accepted,” he said as he painted the wall with a rainbow brush.

It’s possible the cap is referring to Khalifa’s University of Pittsburgh performance in 2019, while Khalifa’s mom is named Peachie. And Chameleon’s tragic story is very likely referring to Khalifa’s trans sister Lala, who died in 2017 at 32. “The loss of my sibling has been the hardest thing I’ve had to deal with but with your prayers and well wishes my family will get though this” Khalifa tweeted on Feb. 24, 2017.

The Week 5 clue package mentioned that Chameleon has a “lil Chameleon,” and Khalifa has one son, Sebastian Taylor, whom he often posts about on his Instagram. The package was also karate themed, with the Chameleon saying he himself knows how to fight. In 2018, Khalifa began to train in mixed martial arts. “My cousins train jiu-jitsu and stand-up as well. I just got tired of getting my *ss whooped, so I figured I would learn how to fight,” Khalifa told Bleacher Report in 2018.

In Week 7, Chameleon revealed he idolized a “certain legend” as a kid who he now works with and views as his “ride or die.” It’s possible this is a reference to Khalifa’s relationship with Snoop Dogg, whom he’s collaborated with several times, including on a whole album for the movie Mac and Devin Go To High School. “[Snoop is] really my homie,” Khalifa explained to Hiphop DX. “I really look to him for certain things. He looks to me for certain things. We bounce stuff off of each other. It’s not one-sided.”

Finally, in the May 5 episode, Chameleon once again reiterated that he was a military kid. There was a plate of cut up oranges, as well as brownies for sale. Khalifa has a song called “Weed Brownies,” and also created a 2010 mixtape called Kush & Orange Juice. Chameleon’s “Mind Reader Clue” was an old Jordan shoe, which once again pointed to Khalifa. Khalifa is known as being a big sneakerhead, and in 2020 even donated his sneaker collection in order to raise money for music programs in public schools.

At this point, it really is hard to deny that Wiz Khalifa is under the mask.