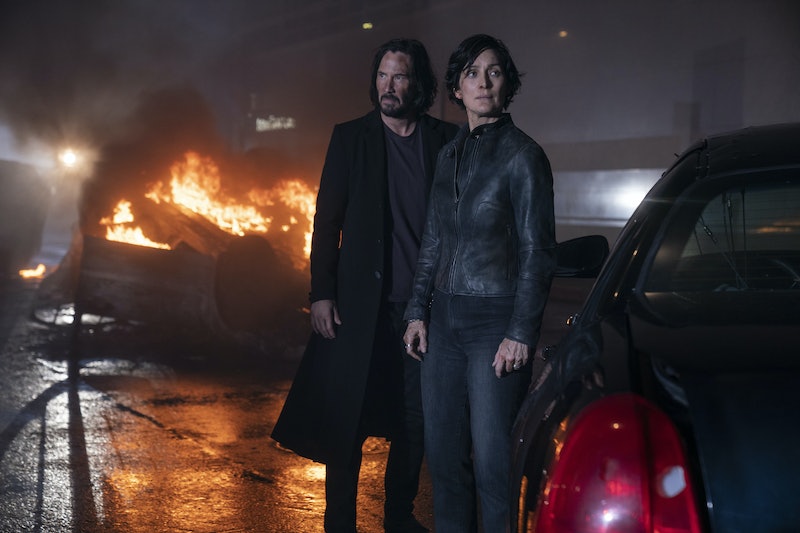 After nearly 20 years, the Matrix is back, baby! The Matrix Resurrections picks up with Neo (Keanu Reeves), Trinity (Carrie-Anne Moss), and a bumper crop of new characters, taking them on a wild ride that only Lana Wachowski could dream up. Like its predecessors, though, the new film is hardly straightforward, and may leave viewers with a few burning questions — particularly about the twist near the ending. Below, a quick recap of what went down, and what it means for the franchise as a whole. Major spoilers for The Matrix Revolutions and The Matrix Resurrections follow.

Viewers may find themselves a little unmoored when they step back into the Matrix for this hurrah. It’s been 18 years since the last two films from the original trilogy — The Matrix Reloaded and The Matrix Revolutions — were released, and The Matrix Resurrections feels like a major retcon, at first.

When we pick up with Neo, he’s living as Thomas Anderson: a middle-aged game designer known for his award-winning work on the Matrix video game trilogy. Despite his success, Anderson is clearly a troubled man. He’s still recovering from a psychotic break in which he believed the Matrix to be real, and himself to be the hero of his own video game franchise — an episode that almost led to his death, when he attempted to fly by leaping from a building.

Thanks to the help of his Analyst (Neil Patrick Harris) and his psychiatric prescription — of, you guessed it, one blue pill per day — Anderson manages to lead, if not a happy life, then at least a productive one. His gaming company, which he operates with the help of his smug business partner (Jonathan Groff), is hard at work on a new Matrix video game. But there’s one thing missing from Anderson’s life: love.

Oh sure, he pines for Tiffany (Carrie-Anne Moss), the enigmatic mother of three who looks curiously like Trinity, a Matrix character he designed. But she’s married to Chad (played by John Wick director Chad Stahelski), who frequently — and pointedly — cuts short her conversations with Anderson.

Now, there’s a bigger problem here, which Matrix fans are probably yelling at their screens about: Neo and Trinity died at the end of The Matrix Revolutions. It’s clear that Resurrections has a lot of explaining to do.

Thankfully, Resurrections writer-director-producer Lana Wachowski kept Occam’s Razor close to her chest when writing Neo and Trinity back into the franchise’s digital dream world. As the film explains, humanity made peace with the Machines at the end of The Matrix Revolutions, after Neo defeated Agent Smith at the end of the film. But the truce led to a conflict of its own: a Machine civil war. The Architect, who designed all previous iterations of the Matrix, had promised that he would free the humans who remained in their pods, having their energy harvested by the Machines — but he lost the war.

Instead of freeing humanity, the Machines rebuilt Neo and Trinity, repairing and reinvigorating their damaged bodies, and built a new Matrix around them. Fans already know that Neo’s source code, his ability to mold and shape the Matrix at will, was what made him The One. But Resurrection brings a new revelation: Neo’s source code doesn’t work without Trinity being close by. The new Matrix, then, operates through the energy generated by Neo and Trinity’s bond. To maintain itself, the simulation keeps the couple close, but not too close, vaguely aware of their pasts, but not fully aware.

After he’s freed once again from the Matrix, Neo’s first attempt at connecting with Trinity ends in disaster. His Analyst appears, wielding Neo’s ultra-powerful bullet-time skill against him. After the Analyst threatens Trinity’s life if Neo refuses to return to the Matrix, the two men ultimately come to an agreement: Neo will give Trinity the choice of whether or not to leave. If she takes the red pill, the Analyst will free her and Neo both. If she takes the blue pill, though, Neo will allow himself to be reintegrated into the Matrix.

Of course, things don’t go as planned. The Analyst isn’t going to let Neo and Trinity escape so easily. After Trinity rejects the Matrix, she and Neo go on the run from the simulation’s security programs... right up until they’re trapped on a rooftop.

There’s no choice but to jump. Dying in the Matrix means dying for real. But Neo’s body is plugged-in in Io — Zion’s replacement city — and the hovercraft crew have recovered Trinity’s body from her pod, which means that the Analyst won’t be able to rebuild them to re-power his Matrix. They leap, fall... then stop falling.

As Neo flails below her, Trinity holds his hand, perfectly level in the air. She’s gained the ability to fly — a power that was previously only available to Neo and Agent Smith. She lifts Neo into the air, and they wake up safe with the hovercraft crew. The two later return to the Matrix to antagonize the Analyst, letting him know that they’ll be using their power as The One — The Two? — to reshape the Matrix in humanity’s favor.

Although it isn’t directly explained how Trinity gains the ability to fly, it’s in line with the film’s themes. Whereas the original trilogy focused on Neo as the sole chosen one, Resurrections tells Neo that “It was never just you” — it was Trinity, too. Only together did they succeed. They were always a team, and now, their powers reflect their equal footing.

More like this
'The Last Of Us' Video Game Revealed Tess’ Fate In The HBO Series
By Brad Witter
Linda Ronstadt’s “Long Long Time” Plays A Pivotal Role In The Last Of Us
By Brad Witter
Anne Hathaway Shared A "Thrilling" 'Princess Diaries 3' Update
By Darshita Goyal
Bill & Frank’s 'The Last Of Us' Episode Has Twitter Emotionally Wrecked
By Alyssa Lapid
Get Even More From Bustle — Sign Up For The Newsletter
From hair trends to relationship advice, our daily newsletter has everything you need to sound like a person who’s on TikTok, even if you aren’t.