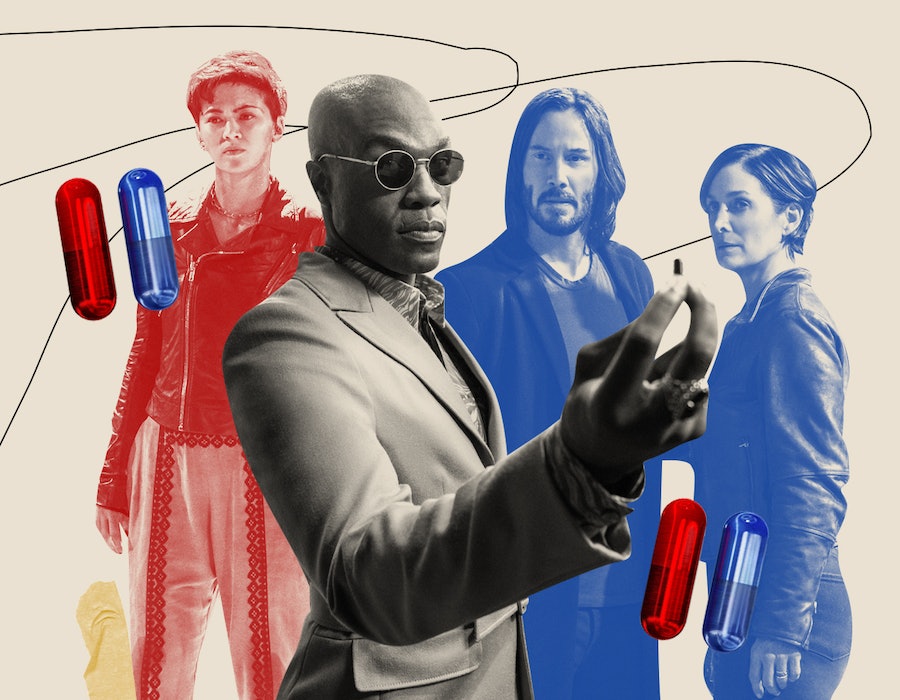 “F*ck both of you.” That’s how Lilly Wachowski replied when, in May 2020, Elon Musk and Ivanka Trump publicly bonded over taking “the red pill.”

A lot has happened since 1999, when Lilly and her sister Lana Wachowski released The Matrix, introducing the concept of the “red pill” into the popular vernacular. The film rapidly became a cultural phenomenon, sucking audiences in with its unbearably cool, green-tinted goth aesthetic and its groundbreaking use of “bullet time” and sticking in their minds with its philosophical undertones. But if any one thing made The Matrix so popular and so compelling, it was the message of empowerment at its heart: We’re all living inside systems of control and exploitation. Those systems seem as unbreakable as the laws of physics, but they’re only clever illusions — and if we can do the hard work of waking up, we can become more powerful than we ever imagined.

The Matrix wasn’t shy about which systems it was alluding to. Its hero, Neo (Keanu Reeves), begins the film in a soul-devouring corporate office job. The film’s villains take the form of government agents, and anyone who stayed for the closing credits heard Rage Against the Machine shout about the evils of imperialism and white supremacy. Many viewers also realized — years before the Wachowskis came out publicly as transgender women — that the film’s themes resonated strongly with the hope and fear, dysphoria and euphoria, of rebelling against one’s gender assigned at birth.

For millennials who were coming into adulthood in an already bleak world, The Matrix offered a hopeful promise: If we put in the work, we can free ourselves from any number of different prisons and become more truly ourselves in the process. That’s why it’s so gut-wrenching that, 22 years later, the film’s biggest and most lasting contribution to the English language — the phrase “taking the red pill” — has become a shorthand for radical anti-feminism and alt-right conspiracy theory. It’s been taken away from those who it was written by and for.

The Matrix Resurrections is here to take it back.

If you haven't seen the original films, or it's been a while, the premise goes something like this. The world as we know it is a massive virtual reality simulation, created by malevolent machines to imprison our minds and harvest electrical power from our bodies. In the real world outside, however, a small group of human rebels continue to hack into the simulation, risking their lives to offer us the choice to wake up.

The Matrix is clear that waking up isn't something to be taken lightly. The film famously presents its protagonist, Neo, with a choice between two pills: a blue pill that will maintain his blissful ignorance and let him sleep or a red pill that will awaken him to the unpleasant truths of the real world.

In a 2020 interview with Netflix, Lilly Wachowski confirmed what some had long suspected — that when writing and directing The Matrix, she and her sister Lana drew heavily on their experiences as then-closeted transgender women. The trans metaphor was clearer in earlier versions of the script, where a character named Switch was written to appear as a woman inside the virtual world, reflecting her internal identity, despite having a more masculine body in physical reality. The Wachowskis removed that detail to make the film more palatable to studios, but many subtler ones remain. Everyone living inside the Matrix isn't really living but playing a role they’ve been forced into — so when characters escape, tasting freedom for the first time, they choose new names for themselves. Still, Neo spends the movie fighting agents who relentlessly call him by his old name, Mr. Anderson, as if mocking him for thinking he could ever be anyone else or anything more. No part of the film makes trans hearts soar like when our protagonist, seconds from being run over by a subway train, pries himself from Agent Smith’s death grip with a defiant declaration: “My name is Neo.” (That moment is all the more poignant in light of Lana Wachowski’s speech at the Human Rights Campaign gala in 2012, in which she revealed that her childhood in a deeply unsupportive environment had once brought her close to suicide by subway train.)

The original Matrix is a monument to what was happening at the time, especially the rise of the modern internet, which in 1999 was only beginning to make its impacts on society felt. Online message boards and chat rooms allowed LGBTQIA+ people to connect with and support each other, no matter how geographically isolated they were or how hostile their real life surroundings. For transgender people in particular, who had almost zero positive visibility in media at the time, it was easy to think that no one else in the entire world felt the way we did — and then, suddenly, it was possible to search Yahoo or Altavista or Lycos and learn there were millions of others out there, going through the same things.

That empowerment was always a double-edged sword. Just as the internet allowed queer and trans people to find support and kinship, it also allowed people with extreme fringe beliefs (from anti-vaccine activists to conspiracy theorists to hardcore anti-feminists) to find like-minded communities and become further radicalized. In 2013, this phenomenon gave us the /r/TheRedPill subreddit: an online community created by and for radically misogynistic men to decry the evils of feminism and share tips for seducing women through psychological manipulation. For them, the Matrix-like illusion we all live inside is the idea of gender equality — and the reality outside is a world that requires white, heterosexual, cisgender men to utterly dominate it, as much socially and politically as sexually.

/r/TheRedPill eventually became so toxic that Reddit shut it down in 2018, but before that happened, the community’s focus exploded to encompass support for Donald Trump and QAnon, and the phrase “taking the red pill” was cemented in common speech as a declaration of conversion to alt-right ideology. Rather than a means of opening your eyes, it came to signify nodding off into a dream world of conspiracy theories, racism, and misogyny. The symbol of awakening had become anti-woke.

The Matrix Resurrections may split critics and audiences down the middle. Its plot is looser and more surreal than that of its predecessors, the stakes aren't quite as high, and it’s deeply self-aware. It mocks itself, alluding to how relentlessly Hollywood lobbied the Wachowskis to make more Matrix movies, no matter how many times they refused. Nonetheless, Resurrections scratches a handful of crucial itches that the original trilogy did not. It gives Trinity (Carrie-Anne Moss), previously second fiddle to Neo, a chance to save the day with superpowers of her own. It finds its way back to the moment of infinite possibility that ended the first film, with Neo having seemingly conquered all — a feeling that vanished in the sequels, when Neo was faced with even more powerful foes, and uncovered even more devastating lies.

Resurrections also delves into the Matrix as a metaphor for identity, especially trans identity, more deeply than the original films had a chance to. It finds Neo and Trinity back in the Matrix, but this time it’s not only their surroundings that are phony: They’re so deeply buried inside false identities that everyone else sees them with faces that aren’t their own. That’s a viscerally relatable experience for many closeted trans people — and just like a transition in outward gender, Trinity and Neo’s eventual choice to leave the Matrix doesn’t come as quickly or simply as it did in earlier films. Instead, they’re taking difficult and uncertain journeys toward honoring what they’ve known in their guts for a long time. Resurrections takes the time to let us feel the tug of war between a hostile world and an inescapable inner truth.

Until then, they can only act out that truth in small ways. Trinity works on motorcycles. Neo creates a popular video game franchise that tells the story of the Matrix directly to the people still inside it — but far from waking them up, the game makes it easier for both players and Neo himself to dismiss reality as an illusion. That's what the Matrix does, the character Bugs (Jessica Henwick) warns us in Resurrections: It weaponizes even our innermost dreams against us. Mirroring her, the villainous Analyst (Neil Patrick Harris) points out that while the old Matrix depended on the ignorance of its victims, the new one only needs to manipulate their emotions to keep them distracted and under control. As long as everyone in the Matrix is perpetually enraged at one scapegoat or another, they can be coaxed into believing anything at all, no matter how absurd. The Analyst’s speech — a succinct and eloquent summary of everything the “red pill” has come to represent in our world — is on-the-nose enough to leave hairline cracks in the fourth wall.

With that in mind, Resurrections poses the same burning question the original trilogy did: How can we hope to fight a system that can warp our perceptions, our language, even our identities? For anyone who stepped out of The Matrix in 1999 feeling hopeful (and maybe newly interested in goth fashion, programming, or martial arts), only to live through the last two decades, it can feel depressing to even ask.

There are moments in Resurrections when Neo realizes his messianic fight for the future of humanity hasn’t actually resolved much of anything. The Matrix is still there, harvesting electricity from unwitting human bodies, while humans in the real world cling to a single protected enclave and live in fear of extermination. Still, his compatriots remind him, some things have undeniably changed for the better. Humans and synthetic intelligences have made alliances, even friendships, and they've built a better future together than either one could have alone. Even the Matrix itself is a brighter and more colorful place than the green-tinted netherworld seen in the original trilogy. Meanwhile in our real world, the fight for transgender equality is arguably more of a fight than it’s ever been — but people are also alive today who wouldn’t be if not for the incredible strides toward widespread social acceptance we’ve made since the Wachowskis wrote and directed The Matrix from inside the closet.

Don't lose hope, Resurrections seems to say. Not even if the machines’ tyrannical rule still hasn’t been overthrown. Not even if the illusions have evolved to trap us even more insidiously than before.

More like this
Ozzie’s Coming Out Scene With Kitty On 'That ’90s Show' Has Twitter Sobbing
By Brad Witter
Janelle Monáe’s Nonbinary "Coming In" Was About "Truth & Authenticity"
By Brad Witter
Adam Lambert Called Out The George Michael Biopic Over Potential Casting
By Sam Ramsden
Adam Ali Hopes 'Waterloo Road' Will “Subvert” Queer Misconceptions
By Sam Ramsden
Get Even More From Bustle — Sign Up For The Newsletter
From hair trends to relationship advice, our daily newsletter has everything you need to sound like a person who’s on TikTok, even if you aren’t.