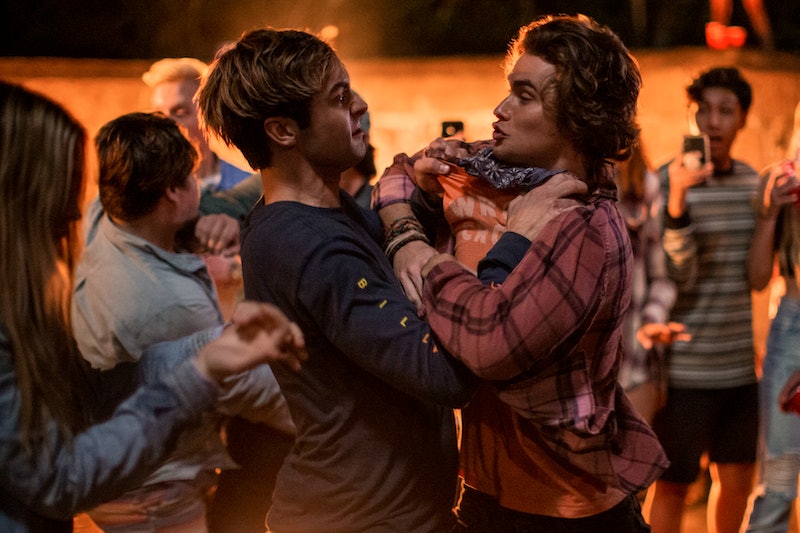 Amid all of the danger and treasure hunting in Netflix's YA series Outer Banks, the meaning of Pogues and Kooks is one of the easier things to explain: the terms are both references to fishing and surfer culture repurposed as class designations. John B introduces the nicknames early on in the series as he drives his band of friends from one side of North Carolina’s Outer Banks to the other.

"This is Figure Eight, the rich side of the island. Home of the Kooks," he says as they pass by golf courses, large ranch houses, and marinas full of expensive yachts. He describes Kooks as "rich trustafarian posers" who he sees as his natural enemies. (He’s not wrong; all the antagonists in the show are rich).

Soon the landscape changes, and instead of country clubs John B is driving by shanties, run-down boats, and people fishing off the side of the bridge. "This is the south side, or The Cut," John B explains. "Home of the working class, who make a living busing tables, washing yachts, running charters. The natural habitat of the Pogues." John B adds that unlike the Kooks, the Pogue teens are largely ignored and neglected — which is sad, but also means they're free to live a Lost Boys-esque lifestyle.

As John B explains, "Pogues" is a play off of the word pogies, the common nickname for the small and silver Menhaden fish. According to Outdoor Life, Menhadens smell and are "unremarkable looking"; because of their poor taste, you "wouldn't ever intentionally eat one." They're essentially just used for bait, but despite being at the very bottom of the food chain, they're critical to upholding the entire marine ecosystem and are considered the most important fish in the sea. By being food for larger fish like swordfish and tuna, Menhadens ensure that there are still fish humans can eat. This mirrors the way in which the working class Pogues are derided, yet they provide the essential services that keep the entire town's economy going by working the restaurants, hotels, and businesses that even the Kooks frequent.

As such, John B and his friends proudly wear Pogue as a badge of honor, and see themselves as more scrappy and resilient then their Kook counterparts.

"Kook," meanwhile, is a slang term among surfers that means different things, but is always negative in connotation. Per GQ, the most basic definition of a Kook is "an individual with no understanding of the social and sartorial norms of surfing." At best, they wear expensive board shorts, pose with their boards, and don't actually surf. At worst, they attempt to show off in the water and end up injuring the more seasoned surfers. However, according to Urban Dictionary — the extremely unofficial slang guide — "Kook" also speaks to a class divide. It's almost always used by locals to describe the upper class or transplanted gentrifiers who want the status of "local" but look down on the actual people who live in lower income communities there. As one entry poster meanly points out, only "aggro locals" use the term “Kook” because they dislike those who don't live in "sh*thole little coastal towns, don't work construction," and "don't drive old, beat-up trucks." (Rafe Cameron, is that you?)

In the show, practically all the Kooks are stereotypical villains. They’re all incredibly wealthy and out of touch, and like Ward Cameron, often assume that the law will side with them even if they commit crimes. As a result, more conscientious Kooks like Kiara and Sarah prefer to dub themselves Pogues and hang out with John B and his crew.

Are Pogues and Kooks Used IRL?

These designations are central to the show, but they’re not exactly true to life. According to Brent Nultemeier, an Outer Banks resident and owner of OBXsurfinfo.com, the show feels very “make-believe” to the locals. Pogue is “a full on Hollywood thing," he told Esquire. Kook is a surfing term, but he’s never really heard it used to refer to snooty rich people. “Usually a Kook is somebody that doesn't know what they're doing, who bought a surfboard and wants to portray this image of being a surfer when they're entirely not,” he said. “That to me is more of a definition of a Kook than anything else.”

It may all be fictionalized, but these identities are key to understanding the show’s commentary about class divides. Many of the Kooks, like Topper and Rafe, openly express disgust towards the Pogues and often dismiss them as less intelligent and less dignified. Even Ward Cameron, a former Pogue turned influential Kook, shrugs and tells his daughter that John B is “a Pogue, what did you expect?” when he lies about John B abandoning her for gold. And in Ward’s speech after his fake-out death, he says that he’d do anything to avoid being poor again.

Even though the terms refer to two very different things, they both make it clear why the Pogues and Kooks are unable to see eye to eye. As John B says about the Outer Banks, "the island was like America on steroids. The haves and have nots of any place, but magnified and multiplied."