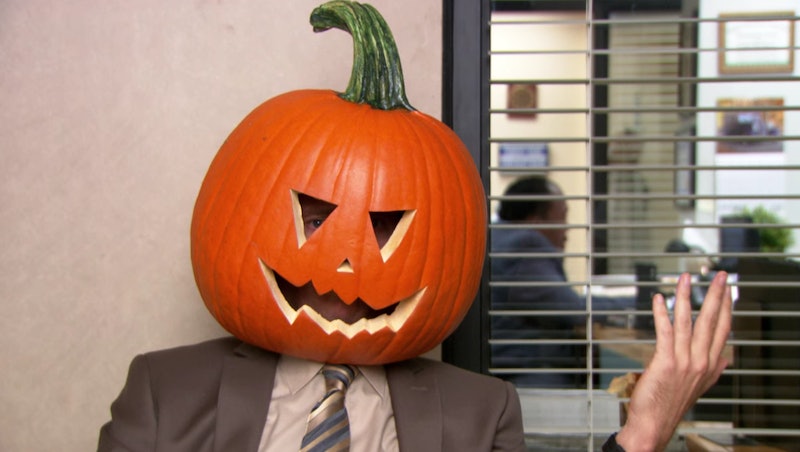 Of the many, many iconic episodes The Office aired throughout its nine-season run, some of the best have been its Halloween episodes. It had six in total, and even seven years after the series finale, it's rare not to see a three-hole-punch Jim or black cat Pam come Oct. 31. Of course, some episodes were better than others: Steve Carrell leaving in Season 7 put a damper on the entire show, and Halloween was never quite the same without Michael Scott's antics. But there are still some true gems worth a rewatch this spooky season. Below, we've ranked all of The Office's Halloween episodes from worst to best, so you know where to start.

The only Halloween-themed part of this episode is the cold open, which has since been cut from rerun broadcasts, Netflix, and even the show's DVD box set. It features Darryl bringing children through a haunted version of the warehouse as various Dunder-Mifflin employees attempt to scare the kids. (For example, Angela, Kevin, and Kelly help pull fake guts out of Erin, who's dressed like Fiona from Shrek). The climax is Michael pretending to die by suicide in a moment that was distasteful then and that the show is better off without now. It did have a classic Jim costume (he wrote the word "book" on his face and said he was Facebook), but it was otherwise pretty underwhelming, Halloween-wise.

Most of the episodes without Michael lack the original magic of the show, so it's no surprise that Andy's first Halloween as boss is a bit dull. He spends most of the episode making Erin feel bad about the party she organized because it's not scary enough, and the side story of Jim and Pam arguing about whether ghosts are real falls flat too. There are a couple of good costumes: Ryan as Jesse Pinkman from Breaking Bad, Meredith's low-budget Kate Middleton, and pregnant Pam as a kangaroo. But watching CEO Robert California try to expose his employees' worst fears in a twisted motivational exercise sealed the deal for this not-so-great episode.

The final Office Halloween episode furthers the show's plot in several major ways. Oscar kisses Angela's State Senator husband, Andy finds out that his parents are broke, and Jim has a big investment lunch for his new business, which Pam is still mad she didn't know about. Things get worse when Jim unnecessarily invests $10,000 — a huge sum of money for the couple. However, Stephen Colbert guest-starring as Andy's old college friend Broccoli Rob, Nellie dressing up as Toby, and Dwight getting a pumpkin stuck on his head all help to redeem this episode, which was still sorely missing Michael Scott's Halloween high jinks.

Yet again, only the cold open is Halloween-related in this episode, but the costumes are pretty great. Jim goes as a guy named Dave whose sole identifying feature is a name tag that says "Dave." Pam is the only employee at the New York corporate office to dress up at all, making her Charlie Chaplin costume pretty awkward. Creed, Kevin, and Dwight all show up as the Joker. And don't forget Andy in a creepy "kitten" costume that's almost as haunting as the Cats movie. Unfortunately, the rest of the episode is a bummer: Holly transfers to the Nashua branch, forcing her and Michael to break up.

The only thing that could get Jim to put on a real Halloween costume is his love for Pam. After their new coworker Danny Cordray (guest star Timothy Olyphant) admits he didn't call Pam back after a date years ago because he thought she was dorky, Jim dresses up as the Popeye to Pam's Olive Oyl and even dresses their young daughter as a can of spinach. It's a sweet episode for Jim and Pan shippers, and it features another round of fun costumes: Gabe goes at Lady Gaga, Kelly as Snooki, and Oscar as a "rational consumer," which wins him their costume contest.

The first Office Halloween episode is also its best. Not only does it have the three hole-punch Jim costume, it's classic Michael Scott. He was told at the beginning of October that he had to fire someone by the end of the month, but of course he put it off until the last minute. This leaves him scrambling to decide who to let go while everyone is dressed in costume for Halloween festivities. According to Angela Kinsey and Jenna Fischer's podcast Office Ladies, actor Creed Bratton almost got the axe. But after Office creator Greg Daniels learned that the actor who played Devon (Devon Abner) had a theater contract coming up, the dismissal fell to him, saving us many funny Creed moments in future seasons.

More like this
The New Grey's Anatomy Interns Have Fans Feeling So Nostalgic For Season 1
By Brad Witter
The Best 'Grey's Anatomy' Intern Moments, From MAGIC to Glasses
By Grace Wehniainen
24 Years Ago, 'Friends' Dropped Its Most Underrated Ross & Rachel Episode
By Grace Wehniainen
The 'Skins' Cast Shared The Reunion We’ve Been Waiting For
By Sophie McEvoy
Get Even More From Bustle — Sign Up For The Newsletter